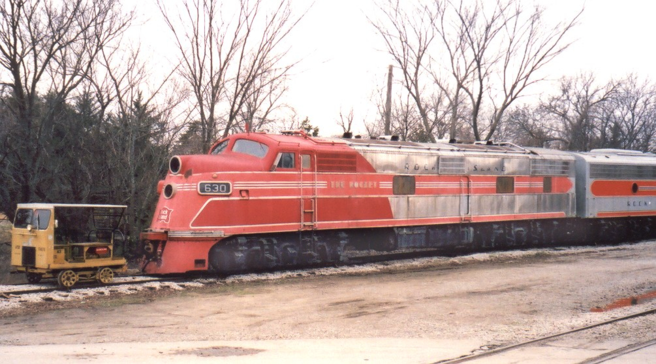 By Russell Meier (Own work) [GFDL (http://www.gnu.org/copyleft/fdl.html) or CC-BY-SA-3.0 (http://creativecommons.org/licenses/by-sa/3.0/)], via Wikimedia Commons

The EMD E6 was a 2,000-horsepower, A1A-A1A, passenger train locomotive manufactured by Electro-Motive Corporation, and its corporate successor, General Motors Electro-Motive Division, of La Grange, Illinois. The cab version, or E6A, was manufactured from November, 1939 to September, 1942, and 91 were produced. The booster version, or E6B, was manufactured from April, 1940 to February, 1942, and 26 were produced. The 2,000-horsepower  was achieved by putting two 1,000-horsepower, 12-cylinder, model 567 engines in the engine compartment. Each engine drove its own electrical generator to power the traction motors. The E6 was the seventh model in a long line of passenger diesels of similar design known as EMD E-units.

Compared with passenger locomotives made later by EMD, the noses of the E3, E4, E5,and E6 cab units had pronounced slants when viewed from the side. Therefore, these four models have been nicknamed "slant nose" units. Later E models had the "bulldog nose" of the F series.

One interesting E6 variant custom-produced for the Missouri Pacific was the model EMC AA. This was a motorcar-style unit which had only one prime mover and 1,000 horsepower, and substituted a baggage compartment where the other diesel V-12 would have been.

Surviving units
Three E6s survive today. One was operated by the Midland Railway, in Baldwin City, Kansas but has since been sold and may become part of a future museum in Manly, Iowa or possibly be restored to operation. It is ex-Chicago, Rock Island & Pacific Railroad E6A No. 630.

Another E6 is located at the Kentucky Railway Museum, in New Haven, Kentucky. It is ex-Louisville and Nashville E6A No. 770, built as L&N 450B. This unit is for display only, as it came to the museum without a majority of its internal parts.

The final E6, Atlantic Coast Line 501, was built as an E3, wrecked, and rebuilt as an E6. ACL No. 501 has been at or near operational status for much of its life. After retirement from regular service, the unit was restored to purple Champion streamliner colors and run on Midwest fan trips by owner Glenn Monhart. After Mr. Monhart's death, the unit found a home in Spencer, North Carolina, at their prominent railroad museum. This was the only E6 present at "Streamliners at Spencer", the largest assemblage of E-units since retirement from regular service in Chicago around 1993.