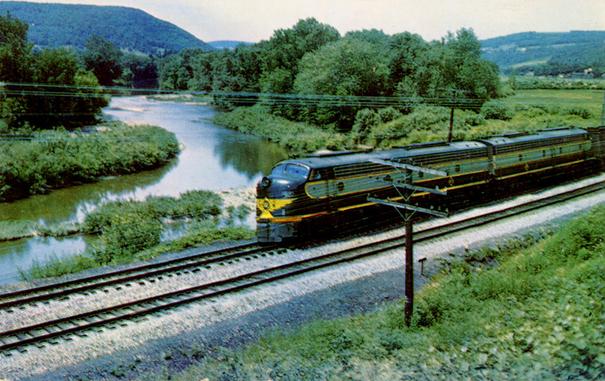 An E8 pulls the Louisville and Nashville's "Hummingbird" over Biloxi Bay. 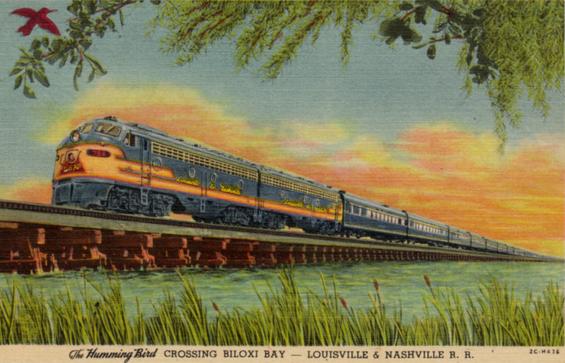 The E8 was a 2,250-horsepower, A1A-A1A passenger-train locomotive built by General Motors' Electro-Motive Division (EMD) of La Grange, Illinois. 450 cab versions, or E8As, were built from August 1949 to January 1954, 447 for the U.S. and 3 for Canada. 46 E8Bs were built from December 1949 to January 1954, all for the U.S. The 2,250 hp came from two 12 cylinder model 567B engines, each driving a generator to power the two traction motors on one truck. The E8 was the ninth model in the line of passenger diesels of similar design known as EMD E-units.

In profile the front of the nose of E7, E8, and E9 units is less slanted than earlier EMD units, and E7/8/9s (and their four axle cousins, the F-unit series) have been nicknamed “bulldog nose” units. Earlier E-unit locomotives were nicknamed “slant nose” units. After passenger trains were canceled on the Erie Lackawanna in 1970, the E8s were re-geared for freight and were very reliable for the EL. These units were on freight trains until the early years of Consolidated Railroad Corporation ("Conrail").

Units noted with the designation E8m were rebuilt using components from earlier EMC/EMD locomotives. Externally the units look just like E8s. The difference in horsepower produced in these E8m units is because the older generators are reused.

St. Louis-San Francisco Railway
A units: 17. Nos. 2006–2022
Note: All named after a Kentucky Derby winner, hence the name of their paint scheme.

Surviving examples
It is estimated that 58 E8s have survived. The former NYC 4085, preserved at the New York Central Railroad Museum, was the lead locomotive on the final eastbound 20th Century Limited. Another surviving E8 is operated by the Midland Railway, in Baldwin City, Kansas. Privately owned, this unit is ex-Chicago, Rock Island & Pacific Railroad E8A #652 and is used for special events. NYC 4096, recently restored, is also on display. New York Central 4097, privately owned, is on display at Merli Manufacturing Company in Duanesburg, New York.

Of the units owned by Conrail, three were saved after their freight-service retirement and went on to be refurbished by the Juniata Locomotive Shops in Altoona, PA for use as Conrail's Office Car Special (OCS) until the merger of 1999. One unit went to CSX, and two were sold off to Bennett Levin, CEO of the Juniata Terminal Company, where they have been overhauled and painted as twin Pennsylvania Railroad E8's. Another, the former EL 833, was purchased by the New York and Greenwood Lake Railroad. The unit was repainted in its original livery as Erie 833, and was on display for a while on the turntable at Port Jervis, NY. In June 2008, two authentic New York Central E8's units (4080 & 4068) were brought to the Medina Railroad Museum in Western New York.