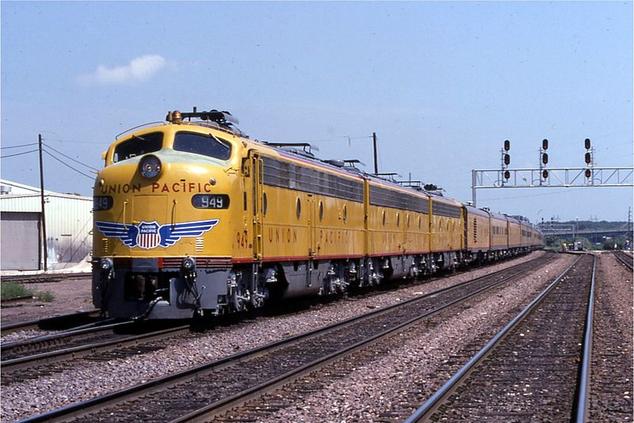 EMD E9 Diesel Locomotive
The E9 is a 2,400-horsepower, A1A-A1A passenger train-hauling diesel locomotive built by General Motors' Electro-Motive Division of La Grange, Illinois between April 1954 and January 1964. 100 cab-equipped A units were produced and 44 cabless booster B units, all for service in the United States. The E9 was the tenth and last model of EMD E-unit and differed from the earlier E8 as built only by the newer engines and a different, flusher-fitting mounting for the headlight glass, the latter being the only visible difference. Since some E8s were fitted with this, it is not a reliable way to distinguish the two. The E9 has two 1,200 hp, V12 model 567C engines, each engine driving one generator to power two traction motors.

Engine and powertrain
The E9 uses twin 12 cylinder 567C engines developing a total of 2,400 hp at 800 rpm. Designed specifically for railroad locomotives, this Roots-blown, naturally-aspirated 2-stroke 45-degree V-type, with an 8 1⁄2 by 10 in, bore by stroke, giving 567 cubic inches displacement per cylinder, remained in production until 1966. Two D.C. generators, one per engine, provide power to four motors, two on each truck, in an A1A-A1A arrangement. This truck design was used on all E units and on MP 7100 and CB&Q 9908 power cars. EMD has built all of its major components since 1939.

Operation
The E9 powered American passenger and mail trains from the 1950s into the late 1970s. Many of America's finest trains — such as Union Pacific Railroad's "City" fleet, Burlington's "Zephyr" fleet and Southern Pacific Railroad's Coast Daylight and Sunset Limited — had E9s pulling them. E9s and their E7 and E8 kin ran throughout the country on lesser-known passenger trains, Chicago's network of commuter trains and many mail and express trains. As America's passenger train network shrank due to non-profitibility, Union Pacific, Rock Island and Illinois Central Railroad began using E9s on freight trains.

Amtrak, founded in 1971, bought 36 E9As and 23 E9Bs from the Union Pacific, Milwaukee Road, B&O and SCL. Amtrak used the E9s until the late 1970s and converted some E9B units to steam generator and head end power cars.

Chicago and Eastern Illinois Railroad
A units: 1. No. 1102
Note: to Missouri Pacific Railroad.

Surviving examples
Many E9s survive today. According to Andrew Toppan's list of March 5, 1997, 42 survive. Four E9s are owned by the Illinois Railway Museum, in Union, Illinois. A number of railroads keep a small number in service for hauling inspection specials, charter passenger trains, investor tours, and the like. The Union Pacific Railroad rosters three, (951, 949, and 963B), which have been re-engined with single EMD 16-645E engines for commonality with other UP power and thus ease of maintenance. ex-CB&Q 9995 sits in Alamosa,CO as SLRG 9925.