EMD F40PH Diesel Locomotive
The EMD F40PH is a four-axle 3,000–3,200 hp B-B diesel-electric locomotive built by General Motors Electro-Motive Division in several variants from 1975 to 1992. Intended for use on Amtrak's short-haul passenger routes, it became the backbone of Amtrak's diesel fleet after the failure of the EMD SDP40F. The F40PH also found widespread use on commuter railroads in the United States and with Via Rail Canada. Additional F40PH variants were remanufactured from older locomotives by Morrison-Knudsen and MotivePower Industries between 1988–1998.

Amtrak retired its fleet of F40PHs in the mid-1990s in favor of the GE Genesis, but the locomotive remains the mainstay of Via Rail's long-distance trains and is a common sight on commuter railroads throughout the United States.

Background
Amtrak inherited an aging and mechanically-incompatible fleet of diesel locomotives from various private railroads on its startup in 1971. The most modern locomotives remained in private hands to operate the various commuter services which, by law, did not pass to Amtrak. To replace these Amtrak ordered 150 EMD SDP40F locomotives, which began entering service in 1973. These were supplemented by 25 GE P30CHs which entered service in 1975. The SDP40F was a troubled design; problems with weight distribution led to a series of derailments in the mid-1970s. Meanwhile, the poor truck design of the P30CH (and the electric GE E60CP) curtailed further orders of that unit when Amtrak found itself needing more short- and medium-distance power in the spring of 1975.

Design
The design of the F40PH was based on the EMD GP40-2 freight locomotive and shared that locomotive's turbocharged EMD 645E3 V16 cylinder, two-stroke, water-cooled diesel engine (prime mover). The prime mover developed 3,000 hp at 893 RPM. The main (traction) generator converts mechanical energy from the prime mover into electricity distributed through a high voltage cabinet to the traction motors. Each of the four traction motors is geared to a pair of driving wheels; the gear ratio determines the maximum speed of the locomotive. A standard F40PH has a gear ratio of 57:20, permitting a maximum speed of 110 mph. The first thirty locomotives were built with a 1,500-gallon fuel tank; all subsequent units were built with a 1,800-gallon tank. Beginning with the EMD F40PH-2, introduced in 1985, the prime mover developed 3,200 horsepower. Many of the original F40PHs were updated to match that output. The locomotives were 56 feet 2 inches long.

For passenger service the F40PH has another electrical alternator, the head-end generator. The HEP unit generates three-phase AC power at 480 V (500 kW on the first order, 800 kW on later units) for lighting, heating and air-conditioning the train. Originally, F40PHs powered the HEP alternator from the prime mover; from the head end to the train must be a constant frequency, and the prime mover had to turn at a constant 893 RPM while supplying head end power (even standing still, with the throttle in idle). Power to the traction motors was controlled by varying the field excitation of the main (traction) generator. On some later versions of the F40PH (and on many rebuilt F40s), a second small diesel engine at the rear of the locomotive powers the HEP alternator. In these engines, the prime-mover speed varies in the usual way; they can be identified by the diesel exhaust at the rear of the locomotive and by their quiet idle. Remaining F40s, with the constant-RPM prime movers, are noticeably louder.

In the initial design the battery box and air reservoirs were located forward of the fuel tank; in locomotives manufactured after 1977 these were relocated behind the tank. The battery box returned to its original location in the F40PH-2. The F40PH-2s delivered to Caltrain incorporated Southern Pacific Railroad-style headlights.

History
Amtrak ordered its first 30 F40PHs on May 8, 1975; the first of the new locomotives entered service on April 9 the following year. Amtrak intended to use the locomotives on short routes such as the San Diegan in California and Northeast Corridor services between New Haven, Connecticut and Boston, Massachusetts. The long-distance routes were protected by the new EMD SDP40F, described by J. David Ingles in late 1975 as the "stars of Amtrak's long-distance trains." Two events led to a major change in thinking within Amtrak. The first was a sharp decline in the mechanical reliability of the EMD SDP40F, including several derailments. The second was the unusually harsh winter of 1976–1977, which sidelined many of Amtrak's aging steam-heated coaches. Numerous routes were suspended and the new HEP-equipped Amfleet I coaches, designed for short runs, were pressed into service. The F40PH with its built-in HEP generator was the natural choice to haul these trains.

As problems with the EMD SDP40F mounted, Amtrak adopted the F40PH as its long-term solution nationwide for diesel service. In the spring of 1977 Amtrak traded 40 SDP40Fs back to EMD; components including the prime mover were installed into an F40PH's frame. The 40 rebuilt locomotives were designated F40PHR and were identical to new-build F40PHs, incorporating the larger fuel tank and more powerful HEP generator which had become standard. Amtrak ultimately acquired 123 F40PHRs in this manner, which combined with new orders between 1975–1988 led to a fleet of 216 locomotives, the country's largest fleet.

The F40PH performed well for Amtrak; at the start of the 1990s only four had been retired and the locomotive was at the center of Amtrak's advertising. Trains magazine estimated that an F40PH traveled as many as 175,000 miles a year.  Amtrak began replacing the F40PH with the GE P40DC in 1993 and the GE P42DC in 1996. Most were retired by 2000; their last regular assignment was on the Maple Leaf in December 2001. The F40PH continued to serve Via Rail into the 21st century; between 2007–2012 Via refurbished its entire fleet for CAD $100 million. The rebuild program included separate HEP generators, overhauled engines, a 3rd headlight addition, cab reconditioning, additional safety horns at the front, and repainting into the newer VIA scheme. A rebuilt locomotive was included on the back of the redesigned Canadian ten-dollar note in 2013.

Variants
The longevity of the F40PH has led to numerous conversions, rebuildings, and remanufacturings. Several transit agencies lengthened their locomotives to include a separate HEP generator. These were designated F40PH-2C where Cummins generators were employed and F40PH-CAT where Caterpillar generators were used. The F40PH-2D, employed by Via Rail, had special customizations for operating in Canada, including ditch lights. Metra's last 30 locomotives, designated F40PHM-2, were built with a sloped cab similar to the EMD F59PHI. The streamlined appearance acquired the nickname "Winnebago. Speno's four locomotives, designated F40PH-2M, were delivered without turbochargers, limiting power output to 2,000 horsepower. The five EMD GP40 locomotives Morrison-Knudsen rebuilt for Tri-Rail in 1988 were designated F40PHL-2. Progress Rail rebuilt 41 Metra units with remanufactured engines, rebuilt traction motors and microprocessor traction control. These have been designated the F40PH-3.

As Amtrak's F40PH fleet was replaced by newer GE Genesis-series locomotives, Amtrak converted a number of the retired units into baggage/cab cars. Colloquially known as "cabbages" (a portmanteau of "cab" and "baggage"), and officially known as Non-Powered Control Units (NPCUs), these units had their prime movers and traction motors removed and a large roll-up door installed in the side (allowing the former engine compartment to be used for baggage). Amtrak converted 22 locomotives into cabbage cars between 1996–2007. Each converted unit was renumbered by prefixing "90" to its original number. In 2011, Amtrak F40PH 406 was refurbished for Amtrak's 40th-anniversary exhibit train. It was converted to an NPCU to enable push-pull operation of the exhibit train; in addition a HEP generator was installed to supply auxiliary electricity. Unlike other NPCUs, the 406 retains its original number and resembles an operational F40PH externally.

Some F40PHs found their way into freight service, after suitable modifications. The F40M-2F was regeared for a maximum speed of 65 miles per hour and given an enlarged 2,900 gallon fuel tank. It was also fitted with a door, platform, and steps at the front.

Original owners
Electro-Motive Division manufactured 475 F40PHs of all types between 1975–1992. The orders for GO Transit and Via Rail Canada were built by General Motors Diesel, the company's Canadian subsidiary, and designated GMD. Morrison-Knudsen and its successor Motive Power Industries remanufactured another 31 locomotives between 1988–1998. 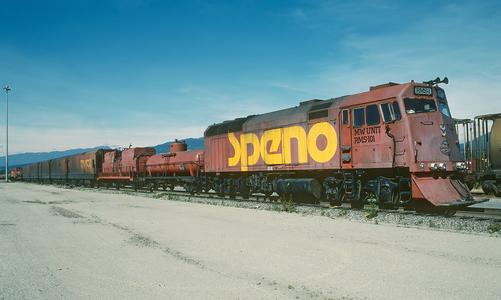 A new F40 leading two SDP40Fs with the Coast Starlight. The F40 is painted in the new Phase II livery while the SDP40Fs are in Phase I. Photo by Drew Jacksich. 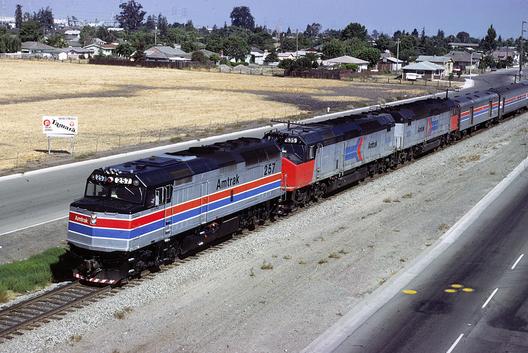