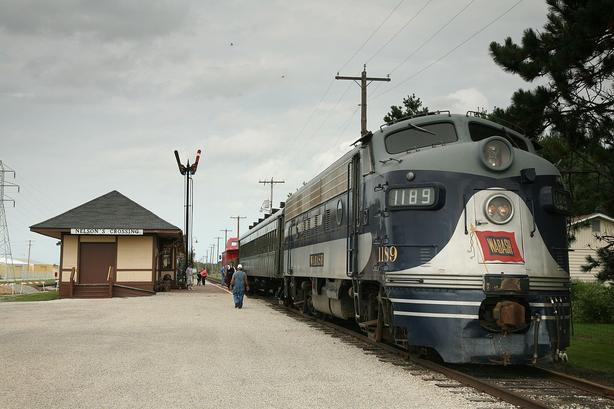 EMD F7 Diesel Locomotive
The EMD F7 was a 1,500 horsepower Diesel-electric locomotive produced between February 1949 and December 1953 by the Electro-Motive Division of General Motors (EMD) and General Motors Diesel (GMD).

Although originally promoted by EMD as a freight-hauling unit, the F7 was also used in passenger service hauling such trains as the Santa Fe Railway's Super Chief and El Capitan.

History
The F7 was the fourth model in GM-EMD's successful line of F unit locomotives, and by far the best-selling cab unit of all time. In fact, more F7's were built than all other F units combined. It succeeded the F3 model in GM-EMD's F unit sequence, and was replaced in turn by the F9. Final assembly was at GM-EMD's La Grange, Illinois plant or GMD's London, Ontario facility.

The F7 differed from the F3, primarily in internal equipment (mostly electrical) and some external features. Its continuous tractive effort rating was 20% higher (e.g. 40,000 lb) for an F7 with 65 mph gearing, compared to 32,500 lb for an F3 with the same gearing.

Many F7s remained in service for decades, as railroads found them economical to operate and maintain. However, the locomotive was not very popular with yard crews who operated them in switching service because they were difficult to mount and dismount, and it was also nearly impossible for the engineer to see hand signals from a ground crew without leaning way outside the window. As most of these engines were bought and operated before two-way radio became standard on most American railroads, this was a major point of contention. In later years, with the advent of the “road switchers” such as the EMD GP7, F units were primarily used in “through freight” and “unit train” service where there was very little or no switching to be done on line of road.

Engine and Powertrain
The F7's prime mover is a 16-cylinder 567B series Diesel engine developing 1,500 hp at 800 rpm.  The 567B is a mechanically aspirated two-stroke design in a 45 degree Vee configuration, with 567 cu in displacement per cylinder, for a total of 9,072 cu in.  A direct current generator that is mechanically coupled to the flywheel end of the engine powers four traction motors, with two motors mounted on each Blomberg B truck.  EMD has built all of its major components since 1939.

Identification
There are no easily identifiable differences between late F3 production and early F7 production; the major differences were all internal electrical system changes. However, no F7 had “chicken wire” grilles of most F3s, and no F3s had later F7 changes described below under Phases.

The F9 is distinguishable from the late F7 by having five, rather than four, carbody center louver groups covering the carbody filters. The additional one is placed ahead of the first porthole, where F7s have no openings. The F9's greater power output, of course, cannot be seen from the outside.

There were also two main classes of F7's: passenger and freight. The freight locomotives only had one headlight, whereas the passengers has two.

Phases
The identification of locomotive “phases” is a creation of railfans, although now used in Diesel Spotters Guide. EMD used no such identification, and instead kept track of the marketing name (F7) and individual locomotives’ build numbers. During the production cycle of a model, EMD would often make detail changes that were not readily apparent to the casual observer. To keep better track of the variations of locomotives identified the same by the manufacturer, railfans began referring to phases (critical changes to a locomotive line).

Despite not being official designations, the phase description is useful. However, many of the changes described are cosmetic, easily changed features of a locomotive: e.g., roof fans, body panels, grilles and the like could be and sometimes were updated or swapped. Most of the phase differences on the F7 were concerned only with A units; B units varied far less. The following are normally identified as F7 phases:

Phase I (late)
Built from March 1950. Upper grille started out horizontal, as in early Phase I; from March 1951, some locomotives were built with vertical-slotted "Farr-Air" grilles, and by October 1951, all had them. Cab doors became round-cornered, and the kick plates were deleted. The wing windows became taller, with round corners. Two drip strips; one over cab windows, second over door. The end door window became round after November 1950.

Rebuilds
Several F7s were rebuilt by Morrison-Knudsen as F9PHs and used in passenger operations. Others were rebuilt as the "FP10" and used by the Massachusetts Bay Transportation Authority. In addition, the Santa Fe had 190 of their F7As rebuilt into CF7 hood units in the 1970s. Only one original unit from the railway exists to this day.

The Escanaba and Lake Superior Railroad (as of October 2011) operates an FP7A (No. 600) in main line freight service. The unit is the former Milwaukee Road No. 96A, and was purchased in 2005 from the Wisconsin and Southern Railroad.

The California State Railroad Museum in Sacramento, California has the former Western Pacific F7A 913. This engine is currently listed as serviceable. Atchison, Topeka & Santa Fe No. 347C GM-EMD 1949 F7A was given as a gift to the museum by Santa Fe in March 1986 and is repainted to original warbonnet colors. Southern Pacific No. 6402 GM-EMD 1952 F7A given as gift by the Pacific Coast Chapter of the Railroad and Historical Society in June 1978. Both engines are listed as operable.

The Grafton and Upton Railroad in Grafton, Massachusetts operates one F7A as a daily switcher, No. 1501.

The Fillmore and Western Railway in Fillmore, California has two F7As that are operational.

The Monticello Railway Museum in Monticello, Illinois allows guests to operate their Wabash Railroad F7A No. 1189 for a donation through the "Throttle Time" program.

The Boston & Maine Railroad had 4 F7A's with accompanying B units, numbered 4265-4268 (A & B). No. 4267A was demolished in a derailment. No. 4266 survives at the Conway Scenic Railroad in North Conway, New Hampshire, where it is rostered as a spare unit and operated frequently. It is owned by the 470 Railroad Club of Portland ME and operated under a lease agreement with CSRR. No. 4268 is also owned by the 470 Club, and is on static display (exterior only) at CSRR. The prime mover has been removed. No. 4265 is on static display at the Gorham Historical Society at the former Grand Trunk RR depot in Gorham, NH. It is also inoperable but is being converted into a movie theater/picture gallery with access to the cab F7B No. 4268 is owned by the Anthracite Railroads Historical Society, has been altered to resemble an F3B and, as of May 2014, has been cosmetically restored as Delaware, Lackawanna & Western No. 664B, to match the two F3s that operate at Steamtown National Historic Site in Scranton, Pennsylvania.

The Lake Superior Railroad Museum in Duluth, Minnesota owns a Milwaukee Road F7B unit, 71B. It was used to power a snow plow.

The Don Rhodes Mining and Transport Museum at Port Hedland, Western Australia, has a former Western Pacific Railroad F7A: 923A. It was sold to Mt. Newman Mining and operated as lococmotive No. 5451 before being transferred to the Shire of Port Hedland. It is now a static display, with the prime mover removed.

The Minnesota Transportation Museum owns Great Northern Railway F7A 454-A, which is painted in Northern Pacific Railway colors, unrestored, and lacking its internal machinery. They also have steam heat car 16, which Great Northern constructed from F7B 458-B, originally 306-B.

The Galveston Railroad Museum owned F7As Texas Limited No. 100 (ex-Southern Pacific No. 6379) and No. 200 (ex-Southern Pacific No. 6309). The two headed the "Texas Limited" passenger train which made runs to and from Houston until track speed restrictions and liability insurance costs ended operations. No. 100's frame number is supposed to have been Chicago & Northwestern F7B No. 4092, built in July 1952, not a Southern Pacific F7A. It is speculated that the frames were unintentionally swapped up before assembly. Both units were scrapped in 2011 due to extensive damage from Hurricane Ike. The museum now owns 2 more F7's, No. 315 and No. 316, which are both painted in ATSF warbonnet colors. Both units are ex-Southern Pacific, No. 's 6443 (315) and 365 (316).

The United Railroad Historical Society of New Jersey owns two former C&NW F7As that were acquired from New Jersey Transit upon their retirement in 1991. The units were leased to the Metro North Commuter Railroad on the condition that they would be returned at the end of their lease in operating condition. Both units are operable and currently painted for Lehigh Valley (No. 578 and No. 576, respectively). Both units are operated by the Cape May Seashore Lines and stored in Tuckahoe.

The Columbia Star Dinner Train formerly owned two F7s (No. 1950 & No. 1951). Both units were operated by the Columbia Terminal Railroad (Columbia, Missouri) and painted to match the Wabash Railroad scheme. The operation has recently closed.