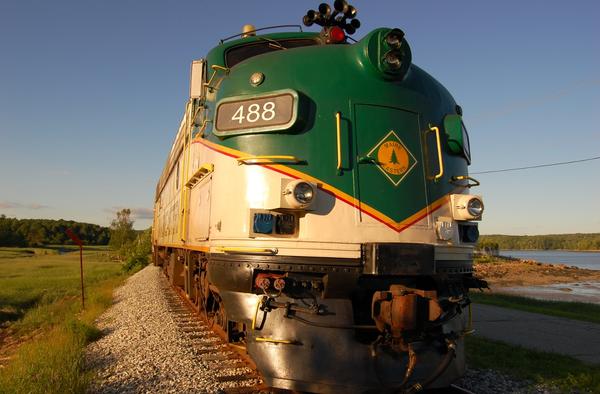 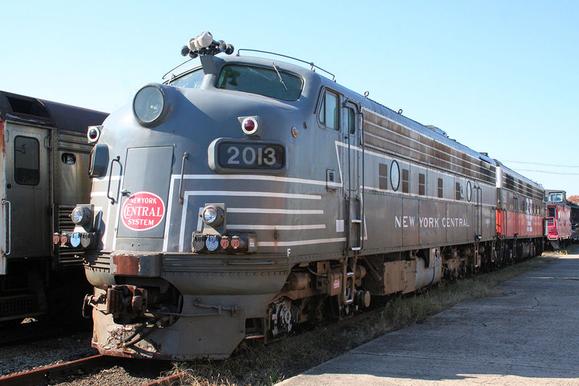 The EMD FL9 (New Haven Class EDER-5) was a dual-power electro-diesel locomotive, capable of diesel-electric operation and as an electric locomotive powered from a third rail. Sixty units were built between October 1956 and November 1960 by General Motors Electro-Motive Division for the New York, New Haven and Hartford Railroad (the "New Haven"); The FL9 model was in direct competition with the less popular Fairbanks-Morse dual-power P-12-42 model.

The locomotive was based on the EMD FP9, lengthened to accommodate additional equipment, including a larger train heating steam boiler. Due to the additional weight of the added equipment and the weight restriction on the Park Avenue 97th Street Portal Viaduct, the locomotive was equipped with a three-axle rear truck, giving it an uncommon B-A1A wheel arrangement. The middle axle of the rear truck was not powered. The Flexicoil type of truck was used at both front and rear, due to this type of truck having more room for fitting the third rail shoes and associated equipment.

The locomotive was capable of using either an over-running or under-running third rail by means of retractable shoes operated by pneumatic cylinders. The shoes were retracted to the vertical position outside of third rail territory: if extended, electrically live shoes would have projected towards the low-level station platforms that were the norm until the 1970s. A few early examples were fitted with a small DC pantograph for use within New York City's Grand Central Terminal, where long gaps exist in the third rail because of the complex trackage that includes numerous single and double slip switches and double track ladders. These pantographs were soon removed. The complex trackage remains, but the overhead power rails are long gone.

The third rail could be contacted by dropping the third rail shoe and the power source switched at speed, as could be the reverse transition. Unlike some other dual-power locomotives, such as British Rail's Class 73, the diesel engine is the primary source of power. Third rail capability was required only because of the Park Avenue Tunnel and underground Grand Central Terminal, which lack sufficient ventilation for diesel exhaust. The third rail extended from Grand Central Terminal to Woodlawn Junction at the New York City border, where the New Haven diverged from the New York Central Harlem Division. However, the dual-power locomotives switched to diesel as soon as possible, immediately after leaving the tunnel, due to diesel fuel being cheaper than electricity for Metro North. The New Haven operated the FL9s from third rail power between Grand Central Terminal and 125th Street Station in upper Manhattan.

Former EMD employee and EMD historian Preston Cook has stated that the five-axle configuration was originally designed by EMD to allow additional water tankage on an FP-9 used for long distance passenger trains, and only later adapted the unit to support the additional equipment needed for dual-power operation.

New Haven trackage between Woodlawn and New Haven, Connecticut, 72 miles from Grand Central, was electrified in the early 1900s at 11,000 volts, 25 Hz AC overhead. The New Haven was the pioneer of heavy mainline railroad electrification in the United States. Early plans to extend the catenary to Boston were never completed due to the perennial financial problems that plagued the New Haven almost continuously from the 1920s to its demise in 1969. Amtrak finished the project in 1999.

The FL9s allowed through passenger trains from Grand Central Terminal to reach Boston, Springfield, and other non-electrified destinations without the need for an engine change at New Haven. They were purchased with the intent of allowing the eventual elimination of all New Haven electric locomotives and the abandonment of the electrification east of Stamford, Connecticut, 33 miles from Grand Central. The fact that the entire New York to Boston line is now electrified shows the shortsightedness of this concept, which had been adopted by the McGinnis management to avoid the cost of modernizing the New Haven’s Cos Cob, Connecticut power plant. The New Haven to Boston electrification was completed by Amtrak in 1999.

Prior to the introduction of the FL9, all non-multiple unit New Haven passenger trains were hauled by electric locomotives between New York and New Haven, with a change to steam (before 1950) or diesel at New Haven. Meeting the weight limits of the Park Avenue Viaduct in Manhattan, the FL9 made it possible to eliminate the engine change. FL9s were used on the New Haven's premier "name" train, the Merchants Limited, which covered the 229.5 miles between Grand Central Terminal and South Station, Boston in 4 hours 15 minutes.

Introduction of the FL9 allowed the New Haven to scrap its entire fleet of pre-1955 electric locomotives, many of which were less than 25 years old. The FL9 had higher operating costs and lower performance than the electric locomotives it replaced. The only New Haven electrics surviving through the FL9 period were the General Electric EP5 "Jets" of 1955 as well as the non-passenger General Electric E33s purchased secondhand from the Virginian Railroad in 1959. Three FL9s were required to approach the performance of one EP5. But the powerful "Jets" were doomed by poor maintenance, and the last were retired in 1977, after having been re-geared for freight service by inheritor Penn Central in 1973. In keeping with the New Haven's policy of dual service utilization of locomotives, FL9s were used at night to move a Trailer-on-FlatCar (TOFC) train, with difficulty, in one direction between the Cedar Hill yard in New Haven and the Oak Point yard in The Bronx. Assigned to this train in the other direction, an EP5 locomotive could easily outrun automobile traffic on the adjacent Connecticut Turnpike.

The electrical supply available from the third rail—660 V DC—was identical to the requirements of diesel locomotive traction motors, enabling a fairly easy conversion to a dual-power locomotive. A DC electric compressor provided air for the brake system until the diesel engine was started. Two batches of FL9s were built; 30 locomotives (including the original test units 2000 and 2001, originally built with a "Blomberg" front truck, but later upgraded following testing) from October, 1956 through November, 1957 of 1,750 hp from an EMD 567C engine; and 30 between June and November, 1960 of 1,800 hp from a newer EMD 567D1 engine. The paint scheme as delivered was the bright McGinnis scheme of red-orange, black and white and the Herbert Matter designed "NH" logo. FL9s were initially fitted with the Hancock air whistle, a trademark of New Haven units of this time, instead of the standard air horns on diesel locomotives.

Legacy
The FL9s could be considered successful, despite being under-powered compared to the powerful electrics they replaced, which also had their problems. However for other reasons, the New Haven never did abandon its electrification, negating the primary reason for purchasing the FL9s. In 1969, the New Haven FL9 fleet passed to Penn Central on the merger of the Pennsylvania Railroad and New York Central Railroad, and some were repainted in Penn Central schemes, while others remained in their former New Haven paint. When the New York Metropolitan Transportation Authority ("MTA") began funding these commuter services in 1970, many were repainted blue with a bright yellow nose, although they remained Penn Central-owned. The locomotives passed to Conrail in 1976. 12 FL9s were sold to Amtrak, six of which were re-manufactured by Morrison Knudsen starting in 1978.

Also in 1978, FL9 #5048 was used in the filming of the original "Superman" movie starring Christopher Reeve. Still painted in New Haven livery, the unit was depicted pulling a commuter train past the entrance to Lex Luthor's hideout during the villain's introduction scene.

In 1983, Conrail passed its commuter operations to state agencies. In New York State, the MTA formed Metro-North Railroad as a subsidiary company to operate these, and operations in Connecticut under contract with that state. The locomotives were repainted in Metro-North colors, and a large number of them, now in some cases over 25 years old, were rebuilt and modernized. 10 rebuilt for the Connecticut Department of Transportation (CDOT) were painted in the original New Haven (New York, New Haven and Hartford Railroad) paint scheme, which has since been applied to re-manufactured locomotives in the CDOT's Shoreline East service pool, and on four new GE Genesis II P32AC-DM dual-mode locomotives.

Many were replaced only in the early years of the 21st century by new power, a service life of almost 50 years. Metro-North and Connecticut DOT along with the Housatonic Railroad operated a "Farewell to the FL9's" fan trip from Stamford, CT to Canaan, CT and return on October 23, 2005. The last FL9 to see passenger service was in late 2009. Metro-North officially retired all remaining FL9s in 2009. Six owned by the Connecticut Department of Transportation are currently retired and are being stored in New Haven Yard awaiting sale. The FL9s are restricted to branch lines since they no longer have the ability to operate on third rail power. A number have been donated to museums in the area; the Amtrak units were purchased by New Jersey's Morristown and Erie Railway for tourist train service, and two of them are now serving in Maine for the Maine Eastern Railroad in passenger service from Brunswick, where Amtrak Downeaster ends, to Rockland Maine. The Orford Express in eastern Quebec, Canada also has an operational FL9. From May 29 to June 1, 2014 a New Haven restored FL-9 # 2019 was in operation at the Streamliners at Spencer event in North Carolina. This unit was restored by the Railroad museum of New England. 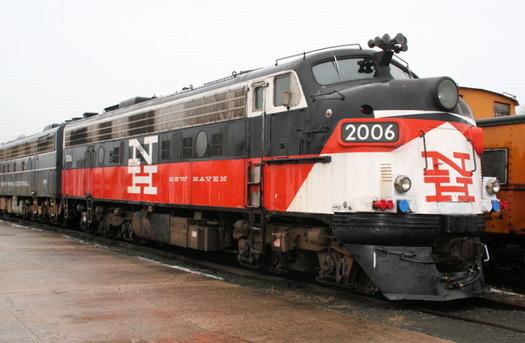