Design
While EMD's E-units were successful passenger engines, their A1A-A1A wheel arrangement made them less useful in mountainous terrain. Several railroads had tried EMD's F3 in passenger service, but there was insufficient water capacity in an A-unit fitted with dynamic brakes. The Atchison, Topeka and Santa Fe Railway's solution was to replace the steam generators in A-units with a water tank, and so only fitted steam generators into the B-units. The Northern Pacific Railway's solution was to fit extra water tanks into the first baggage car, and to pipe the water to the engines. The real breakthrough came when EMD recognized the problem and added the stretched FP7 to its catalog.

A total of 381 cab-equipped lead A units were built; unlike the freight series, no cabless booster B units were sold. Regular F7B units were sometimes used with FP7 A units, since they, lacking cabs, had more room for water and steam generators. The FP7 and its successor, the FP9, were offshoots of GM-EMD's highly successful F-unit series of cab unit freight diesels.

F3s, F7s, and F9s equipped for passenger service are not FP-series locomotives, which although similar in appearance have distinctive differences, including but not limited to the greater body length. The extra 4 ft of length was added behind the first body-side porthole, and can be recognized by the greater distance between that porthole and the first small carbody filter grille. The corresponding space beneath the body, behind the front truck, was also opened up; this either remained an empty space or was filled with a distinctive water tank shaped like a barrel mounted transversely. 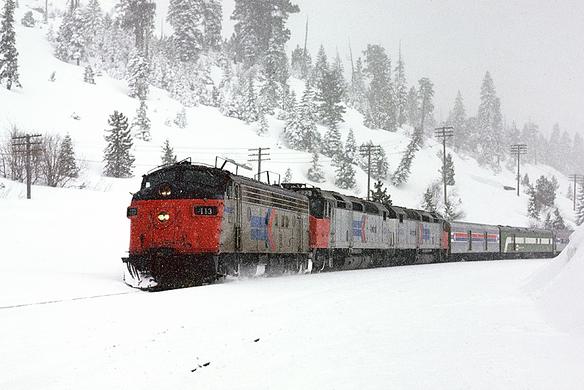