EMD GM10B Electric Locomotive
The GM10B was a solitary testbed electric locomotive for freight duties built by General Motors' Electro-Motive Division of the United States in collaboration with ASEA of Sweden. It was built at EMD's La Grange, Illinois plant entering service in August 1976. Equipped with B-B-B trucks and a high proportion of Swedish ASEA design and technology, the locomotive was designed for high-speed freight service.

Motives
At the time, high oil prices had a number of large US railroads contemplating electrification of their most heavily used lines, while the only major US railroad with freight-hauling electrification, the Penn Central, had a fleet of aging locomotives needing replacement.

Circumstances changed after the GM10B and earlier GM6C locomotives were developed; oil prices declined, which wiped out the interest freight railroads had in electrification, while diesel locomotive power and adhesion were improved.

Meanwhile, the bankruptcy of Penn Central led to the division of the railroad's physical plant between Amtrak, which inherited much of the electrified region, and Conrail. Increased access charges on the part of Amtrak led to Conrail ceasing electric operations in 1982, dismantling the electrification on its lines and avoiding Amtrak-owned rails.[citation needed] The two locomotives were now surplus to requirements and were returned to EMD, remaining in the LaGrange plant's yard until scrapping in the mid 1980s. 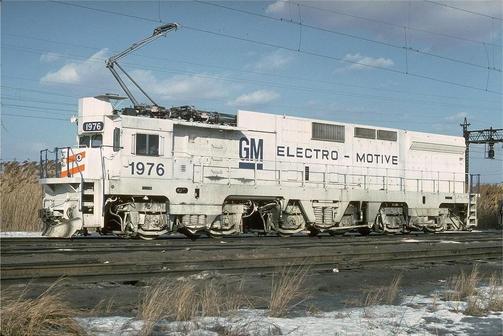