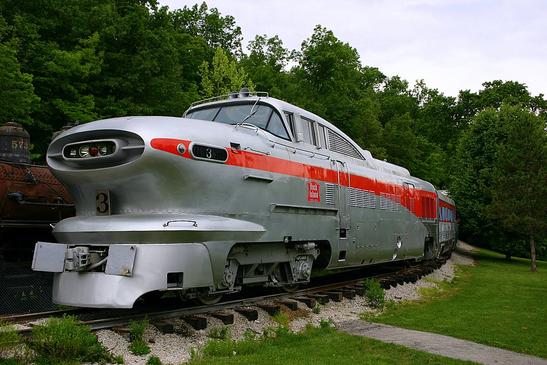 A preserved EMD LWT12 at the Museum of Transportation in St. Louis, Missouri.

Originally, the EMD LWT12 was intended to be part of an inseparable set along with ten specially designed high-speed, low-cost, 40-foot passenger cars. These cars were built from bus bodies sourced from GM's GMC division which were then widened by 18 inches, had their front and rear modified and were attached to a generic undercarriage. The advantages of this design were that instead of refurbishing the whole carriage, the body mounted on the undercarriage would be scrapped in whole and a complete new modified bus body would be installed in its place with all of the different technical advances that had been developed, essentially resulting in a completely new car for a fraction of the cost. Also, all parts used by these carriages were sourced internally by GM and were also used in other products. All of this meant that initial outlay, as well as maintenance costs, were significantly lower than traditional passenger cars resulting in a situation where railroad companies could offer rail fares similar to bus fares of the time. This design, as well as the EMD LWT12 were the cover feature article of the September 1955 Popular Mechanics magazine. Two of these whole trainsets are known to have been built for the purpose of being driven across the United States for public viewing. Eventually, these trains became the Aerotrain.

Only three LWT12 units were built. First one, EMD serial number 20826, entered service with the Chicago, Rock Island and Pacific Railroad to pull the "Talgo Jet Rocket" train between Chicago and Peoria. Second and third units, EMD serial numbers 21463 and 21464, became integrated in the Aerotrain. Two of the three LWT12 locomotives are now in the care of museums.