By The original uploader was Can't Undo at English Wikipedia (Transferred from en.wikipedia to Commons.) [GFDL (http://www.gnu.org/copyleft/fdl.html) or CC-BY-SA-3.0 (http://creativecommons.org/licenses/by-sa/3.0/)], via Wikimedia Commons 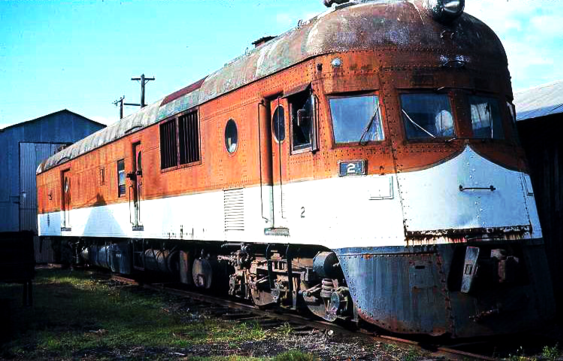 Fairbanks-Morse FM OP800 Diesel Locomotive - Railcar
The OP800 was a lightweight, streamlined railcar built by the St. Louis Car Company in 1939. Fairbanks-Morse supplied the 800 hp, five-cylinder 8 in × 10 in opposed piston engine prime mover. The units were configured in a highly-unusual 2-A1A wheel arrangement (later converted to 3-A1A) mounted atop a pair of road trucks, and equipped with a front swing coupler pilot. The aft section was divided into two separate compartments: one was used to transport baggage and the other served as a small railway post office, or RPO (the forward door, located just behind the radiator louvers, was equipped with a mail hook).

Six units, accompanied by matching trailing car sets, were manufactured exclusively for the Southern Railway (SR). Two were later sold to the Georgia and Florida Railroad and Georgia Northern Railway as maintenance cars. The remaining four OP800s were scrapped in 1955; selected parts were retained for maintenance use on other SR F-M motive power.

At least four of these cars had individual names applied to them, including "Vulcan", "Cracker", "Joe Wheeler", and "Goldenrod".