FM H-12-44TS Diesel-Electric Locomotive
The FM H-12-44TS was a light road switcher version of the Fairbanks-Morse H-12-44 yard switcher. Only three of the 1,200-horsepower (890 kW), six-cylinder opposed piston engine locomotives (builder numbers 12L1021–12L1023) were manufactured especially for the Atchison, Topeka and Santa Fe Railway in May, 1956. The units had an extended frame to accommodate the addition of a short hood behind the cab, and were configured in a B-B wheel arrangement and mounted atop a pair of two-axle AAR Type-A switcher trucks with all axles powered. H-12-44TSs also came equipped with steam generator units as they were acquired solely for shuttling passenger cars in and around the Dearborn Station terminal in Chicago, Illinois.

The locomotives (No. 541, No. 542, No. 543) were delivered in the road's Zebra Stripe paint scheme, though all three would finish out their days on the Santa Fe dressed in the switcher version of the blue and yellow Billboard livery. Coinciding with the end of Santa Fe passenger train service in Chicago, No. 541 was retired on June 1, 1972 and sold to the Allison Steel Manufacturing Company in October of that year; No. 542 and No. 543 were both retired on May 7, 1974, though #543 (the only example to have evaded the scrap yard) was subsequently preserved in Albuquerque, New Mexico and donated to the California State Railroad Museum in March 1986. It has since been moved to the Illinois Railway Museum. 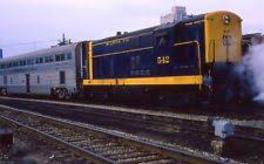