FM H-20-44 Diesl-Electric Locomotive
The FM H-20-44 was a multiple unit-capable end cab road switcher manufactured by Fairbanks-Morse from June 1947 – March 1954, and represented the company's first entry into the road switcher market. The 2,000 hp (1,490 kW), ten-cylinder opposed piston engine locomotive was referred to by F-M's engineering department as the "Heavy Duty" unit. It was configured in a B-B wheel arrangement mounted atop a pair of two-axle AAR Type-B road truckswith all axles powered. H-20-44s shared the same platform and much of the same carbody as the lighter-duty FM H-15-44, which began its production run three months later.

In the same manner as other F-M switcher models, the H-20-44 started out displaying a variety of Raymond Loewy-inspired contours, only to have the majority of these superfluous trim features stripped from the last few units built as a cost-cutting measure. Only 96 units were built for American railroads, as few firms saw sufficient value in moving freight in greater quantities or at a higher speeds than was possible with the typical 1,500- and 1,600 horsepower (1,200 kW) four-axle road switchers of the era. Also limiting the model's utility as a true road unit was its lack of a short hood, which the (ironically) lighter-duty H-15-44 did have. Three intact examples of the H-20-44 are known to survive today; all are the property of railroad museums. 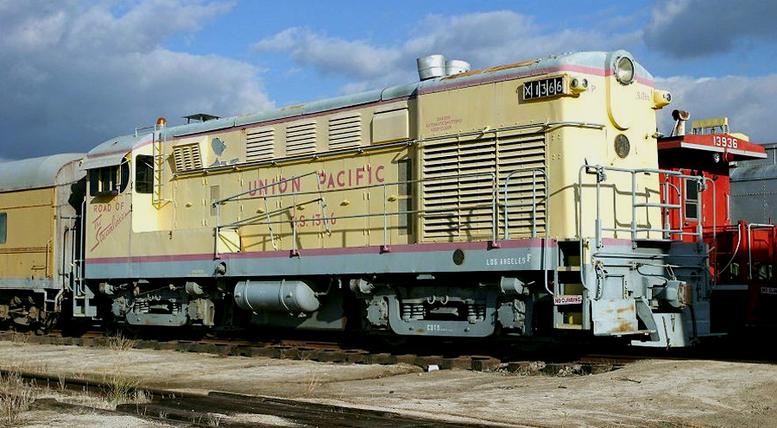 By The original uploader was Can't Undo at English Wikipedia. - Transferred from en.wikipedia to Commons., CC BY-SA 3.0, https://commons.wikimedia.org/w/index.php?curid=2648698