Fairbanks-Morse H-24-66 Train Master Diesel Locomotive
The H-24-66 was a diesel-electric railway locomotive model produced by Fairbanks-Morse and its Canadian licensee, the Canadian Locomotive Company. These six-axle hood unit road switchers, known as Train Masters were deployed in the United States and Canada during the 1950s. Each locomotive produced 2,400 horsepower. They were the successor to the ultimately unsuccessful Consolidated line of cab units produced by F-M and CLC in the 1950s. In common with other F-M locomotives, the Train Master units employed an opposed piston-design prime mover. The official model designation was H-24-66 and rode on a pair of drop equalized three-axle "Trimount" trucks giving it an C-C wheel arrangement.

Overview
Touted by Fairbanks-Morse as "...the most useful locomotive ever built..." upon its introduction in 1953, the 2,400 horsepower H-24-66 Train Master was the most powerful single-engine diesel locomotive available, legendary for its pulling power and rapid acceleration. While some railroads saw advantages in the Train Master's greater power, the perception on the part of others that the unit had too much horsepower (coupled with the difficulties inherent in maintaining the opposed-piston engine, inadequacies in the electrical system, and a higher-than-normal consumption of cooling water) contributed to poor marketplace acceptance of the Train Masters. Perhaps it was simply ahead of its time, as no competitor offered a locomotive with an equal horsepower rating until the ALCO RSD-7 entered production in January, 1954 (As an aside, the EMD SD24 did not arrive on the scene until July, 1958, and GE did not introduce their U25C until September, 1963). Both F-M and CLC ultimately left the locomotive business.

Variations
Three different carbody variants were produced, and were differentiated as follows: Phase 1a units had their air intake louvers located in a continuous line along the top of the long hood, and a wide separating strip between the radiator fans; Phase 1b modifications were minor, consisting only of a "dip" in the long hood handrails that allowed them to better follow the profile of the side walkways; Phase 2 units boasted fewer air intake louvers, with large gaps separating them (the radiators themselves were divided by only a tiny metal strip).

Notes: CP 8905 is the only H-24-66 preserved. It can be seen at the Canadian Railway Museum in Saint-Constant, Quebec, Canada. 8901-8904 originally delivered with unique wide short hoods housing dual steam generators, converted to normal hood width when SG's removed. 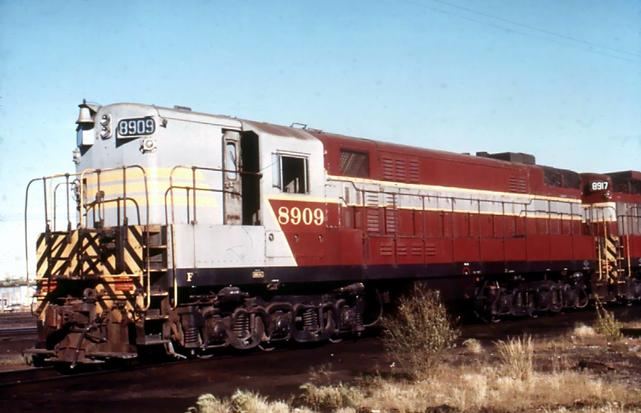