BHP Billiton's AC6000CW 6071 at Finucane Island on the Goldsworthy railway, Western Australia in April 2012, an EMD SD70ACe can be seen at right. 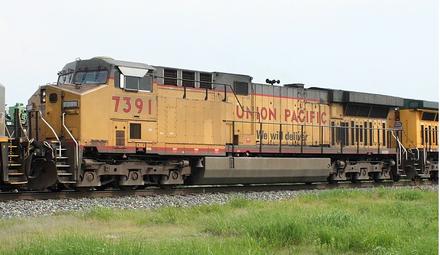 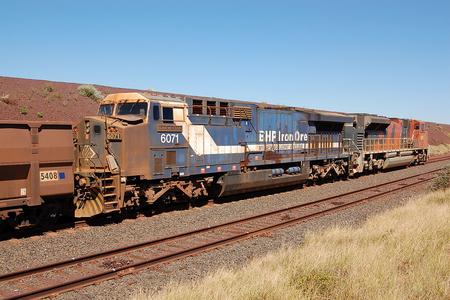 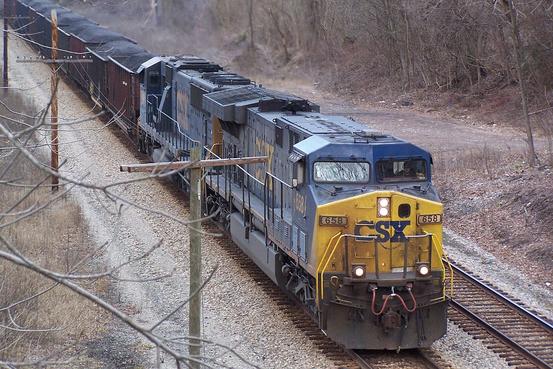 Hood end view of CSX Transportation's 627 at Pinner's Point in Portsmouth, Virginia. Note the enlarged radiator section overhanging the rear of the unit. 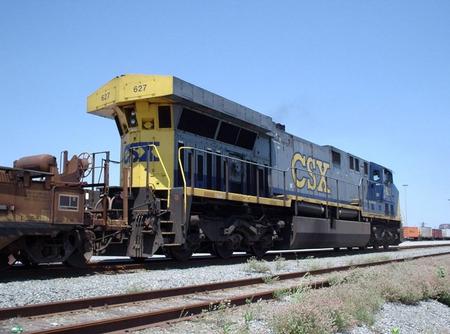 GE AC6000CW Diesel-Electric Locomotive
The AC6000CW is a 6,000-horsepower (4,500 kW) diesel electric locomotive built by GE Transportation. This locomotive, along with the EMD SD90MAC, is among of the most powerful single-engined diesel locomotives in the world. The only locomotive to surpass them is the dual-engine 6,600-horsepower (4,900 kW) EMD DDA40X.

History
The AC6000CW was designed at the height of a horsepower race between the two major locomotive manufacturers, Electro-Motive Division of London, Ontario and GE Transportation of Erie, Pennsylvania in the early to mid 1990s. The goal was 6,000 horsepower (4,500 kW).

GE partnered with Deutz-MWM of Germany in 1994 to design and construct the 6,250 hp (4,660 kW) 7HDL engine for the locomotives. The first locomotive constructed was the "Green Machine" GE 6000, the nickname due to the green paint scheme. The first production models were also built in 1995: CSX Transportation 600-602, and Union Pacific Railroad 7000-7009. After testing was completed by GE, they were released to their respective owners in late 1996.

The initial locomotives suffered from various mechanical problems with the most severe being the engine itself. There were major vibration problems which were addressed by increasing the engine mass to alter the resonant frequency. This in turn caused problems with the twin turbochargers. These problems caused GE to push back full production of the new model until 1998. Changes such as stiffer materials and increased engine wall thickness (to increase mass) were in place at full production.

The AC6000CW ended production in 2001, although Union Pacific's 75xx series remains in daily use as of 2010, mostly on rock and gravel trains in Texas. Union Pacific designates these units as C60AC, CSX as CW60AC.

CSX Transportation derated most of their AC6000CW units from 6000hp to 4600hp to make them more environmentally friendly. These units are classified as CW46AH.

600-602 original prime movers replaced with 4,400 hp (3,300 kW) 7FDL16 engines. This is due to these units being pre-production models & mechanical differences between them and the production model.

7511 suffered an electrical fire and was retired from the roster in June 1999. The damage was covered under warranty and the unit was sent to GE for repairs. GE built another 7511 unit for UP to replace the original in January 2001, renaming the original 7511 to GECX 6002.

8 units, numbered 6070-6077, built in June & July 1999. These are the only AC6000CW's that were exported outside of the United States. They are the most powerful locomotives to have operated in Australia. The 8 units were named after towns and locations in the Pilbara region of Western Australia where they operated:

In 2013/14 these were replaced by EMD SD70ACes. They were eventually scrapped in late 2014 after BHP couldn't find any buyers who were interested in acquiring the locomotives.