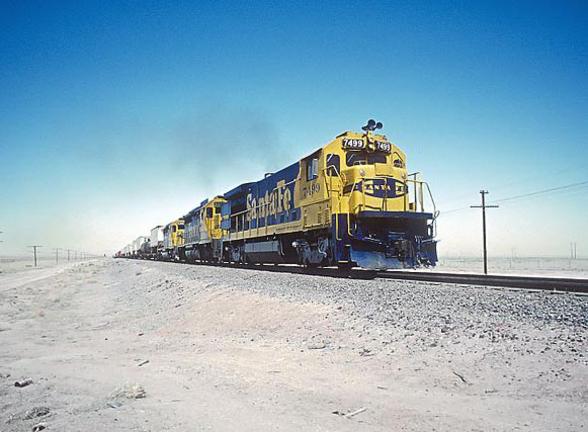 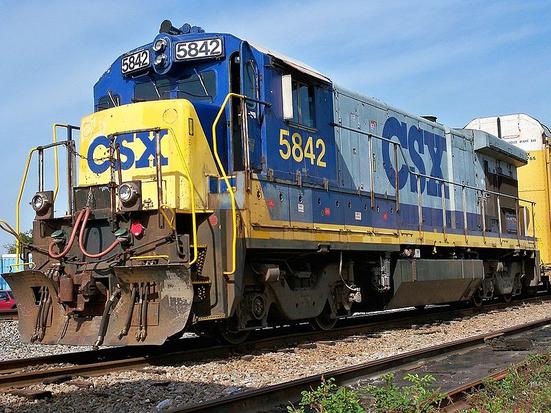 GE B36-7 Diesel-Electric Locomotive
The GE B36-7 is a 4-axle road switcher diesel-electric locomotive built by GE Transportation Systems between 1980 and 1985. 222 examples of this locomotive were built for North American railroads and eight units were built for a Colombian coal mining operation. The units were designed as successors to GE's U36B's. Of the 230 locomotives built, 180 of them were built for two Eastern railroads - Seaboard System Railroad (which became part of CSX Transportation in 1986) and Conrail.

These 4-axle locomotives were powerful ones when introduced in 1980. When first built the units were rated at 3,600 hp (2,700 kW), later versions were rated at 3,750 hp (2,800 kW). They were designed for fast and priority service, moving intermodal and container trains. Most of Seaboard's 120 units were still in service as late as 2006. Conrail's units were all retired in 2000 and 2001. One notable exception among Conrail's units was CR 5045, which was destroyed in the infamous wreck of the Colonial at Chase, Maryland, on January 4, 1987.

CSX was the last Class 1 railroad to roster B36-7s and GE Dash 7s in general. Though originally intended for high speed service, they spent much of their later life working on local trains in the Southeast and in the last years worked low priority MOWtrains. In late 2009 CSX announced that it would retire all GE Dash 7s when they came due for their 90-day inspection. The last run of a B36-7 on the CSX system occurred in November 2009 and as of January 2010 all units are officially retired, bringing to an end the Dash 7 era on Class 1 railroads.[citation needed]. However, there are pictures as of March 2011 of CSX 5877 working in Wilmington NC.

Introduction
The first B36-7s were built for the Cotton Belt in January 1980. These first four units Nos. 7770-7773 were part of a thirty unit order that included 26 B30-7 units. According to Extra 2200 South these units featured General Electric's new Sentry Adhesion System. The Sentry System was a wheel slip detection system. These 3600 horsepower units also featured the new GE 752AF traction motor, the new GTA-24 traction alternator and the 83:20 fine tooth gearing. One of the Cotton Belt B36-7s, the No. 7771, was damaged in a wreck within a year of delivery and rebuilt as a B unit. This engine did not receive a special model designation to indicate its cabless status. Railfans sometimes term it a B36-7(B).

The second order for B36-7s was built for the Santa Fe in October and November 1980. There was a different door configuration for the high voltage electrical cabinet when compared to the Cotton Belt order. Two units, 7484, 7486, were set up at remote control transmitters and two units were set up as remote control receivers 7485, 7487. These were the first GE units built with Locotrol remote control equipment. The units were originally tried on the York Canyon Coal trains operating between York Canyon, New Mexico and Fontana, California.

Notes: Some of the units were sold to British Columbia Railway, renumbered 3604-3613.