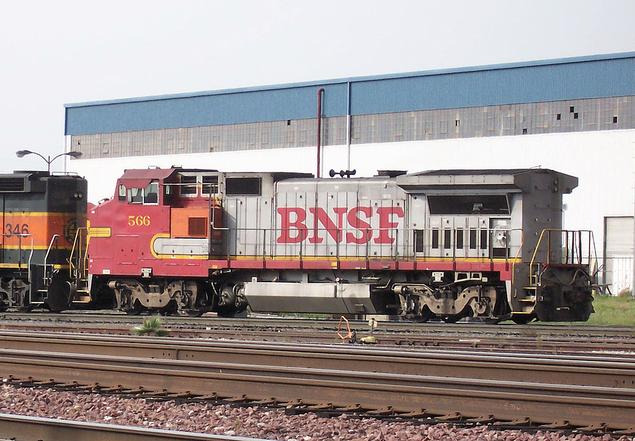 GE Dash 8-40BW
The Dash 8-40BW, or B40-8W, is a four-axle road switcher diesel locomotive built by GE Transportation Systems for the  Atchison, Topeka and Santa Fe Railway (ATSF) in the early 1990s. It is part of the GE Dash 8 Series of freight locomotives.

The locomotive model designation is interpreted as follows: B (B type truck arrangement, 2 axles per truck) 40 (4000 horsepower) -8 (the generation when it was designed, in this case meaning the late 1980s) W (Widecab).

ATSF was the only railroad to order the B40-8W, and a B unit (cabless booster unit) was almost made with it, but because the price would have been the same for B40-8Ws with cabs or without, they decided to order units with cabs only.

All of ATSF's B40-8Ws became part of BNSF Railway, and many of them were repainted into BNSF's "Heritage 2" paint scheme, although several units still retain their "Warbonnet" paint scheme from their previous careers with ATSF.

Disposition
In mid-2010, BNSF put 15 B40-8Ws up for sale. These units were on long-term lease and were returned to their lessor. Four units have been sold to the Providence and Worcester Railroad in Massachusetts. The PW sold one of their B40-8Ws to the Arkansas-Oklahoma Railroad.