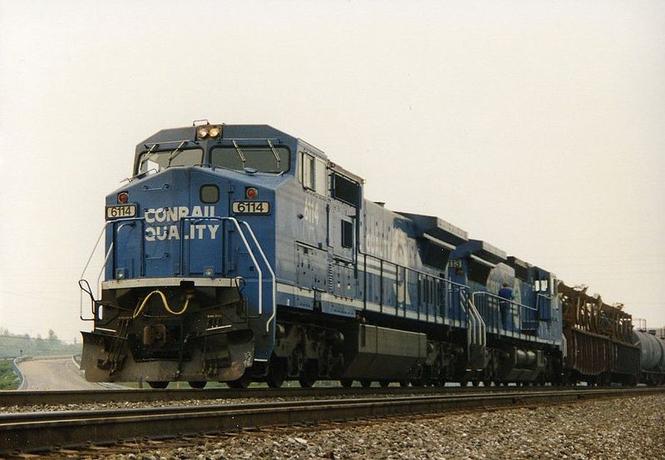 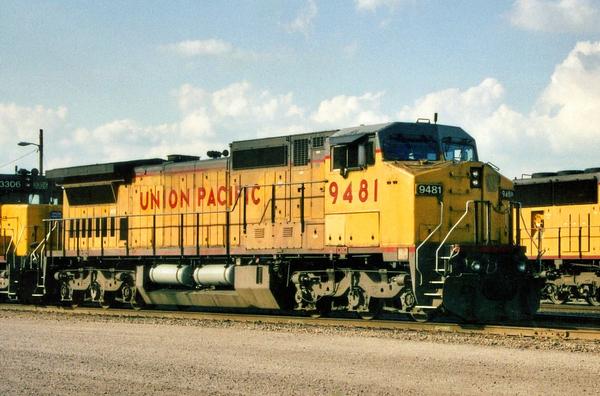 GE Dash 8-40CW
The GE C40-8W is a 6-axle road switcher diesel-electric locomotive built by GE Transportation Systems from 1990 to 1994. It is part of the GE Dash 8 Series of freight locomotives.

This locomotive model is often referred to as a Dash 8-40CW, and is distinguished from the predecessor Dash 8-40C by the addition of a newer "wide" or "safety" cab.

A cowl-bodied version of this locomotive, built only for the Canadian market, was the GE Dash 8-40CM.

Most units are still in service as of late 2017, some have been retired and/or sold to other railroads or leasing companies.

Like most GE locomotives, the Dash 8-40CW saw continuous upgrades over the course of its production. Later model Conrail units were built with split cooling systems for the turbocharger intercooler and engine cooling (previous Dash 8 series had both on the same cooling system). The later units delivered to Conrail in 1993 and 1994 were equipped with GE's Integrated Function Displays (IFD). The IFDs are LCD displays that provide the engineer with the same information previously provided by analog gauges, as well as integrating distance counter and End of Train Device telemetry functions.

Rebuilds
The General Electric Dash 8-41CW or Dash 8-41W (C41-8W) is a variation with the same 16-cylinder engine upgraded to 4,135 hp (3,083 kW). 154 were produced between 1993 and 1994 for both the Union Pacific and Santa Fe (ATSF) railroads, and some Dash 8-40CW units were also uprated to Dash 8-41CW standard by the railroads. Since no four-axle versions of this unit were built, the "C" designation (indicating trucks with three powered axles, or C-C) is often omitted.

The GE Dash 8.5-40CW is 6-axle a 4,000 hp (2,800 kW) diesel-electric locomotive rebuilt by Norfolk Southern. The first locomotive started its rebuild in 2012. Only one unit is on the active roster, and it is stored. The units will be rebuilt with the Norfolk Southern-designed wide-nose RLS cab which meets current FRA crash-worthiness standards. The rebuild will also include the installation of locomotive speed limiter (LSL), and cab signals and other electronics upgrades. NS discontinued the rebuild program in April 2016 due to repeated failures.

The GE C40-8WM was an experimental rebuild program done by GE in partnership with CSX at GE's Locomotive plant at Erie, Pennsylvania in late 2016 and early 2017 to see if they were worth rebuilding. The program consisted of 10 C40-8Ws from CSX, Nos. 7771, 7774, 7799, 7801, 7807, 7811, 7786 ,7787, 7779 & 7780, the units were rebuilt with updated prime movers, new cab interiors, new control system (upgrade to CCA from IFC), installation of PTC equipment, fresh repaint, body work as needed, addition of shutters to the radiator to help more accurately control the engine temperature, and a few other refurbishments.

Notes: Bought from LMSX. Conrail Blue paint with CN markings and IC sublettering. Some have been repainted into standard CN paint.

Notes: All units are former CSX and Union Pacific, Units are currently being leased to Canadian National and Norfolk Southern due to high rail traffic levels.