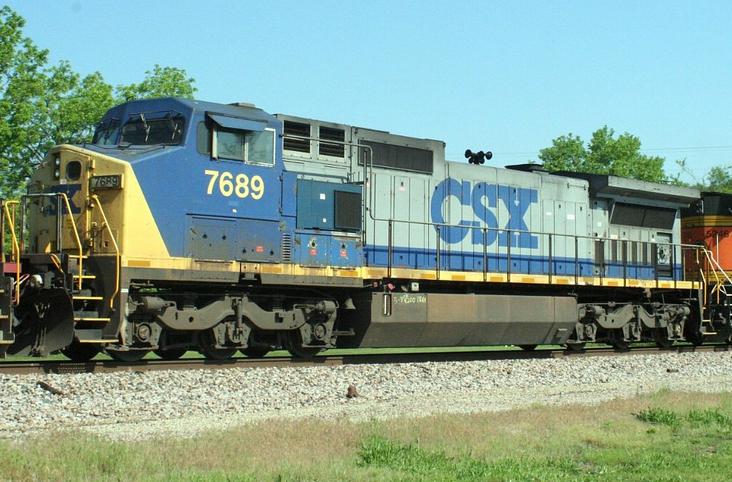 All models of the Dash 8 Series are powered by a 16- or 12-cylinder, turbocharged, GE 7FDL 4-stroke diesel engine.

The Dash 8 locomotive bodies were assembled from several modules, creating a combination to fit the length of the chassis. On models with a traditional narrow short hood, the part of the equipment room immediately behind the cab is taller than the top of the rounded cab roof, giving those models a distinctive appearance. On all models, that part of the equipment room houses the cooling fans for the dynamic braking system.

Traction motors of Dash 8 locomotives were powered by direct current.

Construction History
The Dash 8 prototype was completed in 1984. Manufacture of the improved production units started in earnest in 1987. Early versions of the Dash 8 were manufactured on the Dash 7 production line, but their general appearance was different. The Dash 8-40C, introduced in 1987, featured improved reliability.

Nomenclature
The naming of the Dash 8 Series, and that of its various models, corresponded initially with that of its predecessor, the Dash 7. So, for example, "B32-8" designated a B-B configured 3,200 hp (2,390 kW) Dash 8 Series locomotive.

After product improvements were made to the line in 1987, the official designations for models in this series changed to "Dash 8...", as shown below. However, for simplicity many railroads decided to use designations which follow the pattern of the Dash 7 line. For example, the Dash 8-40C is usually rendered as "C40-8".

Dash 8-32B (B32-8)
This model was manufactured between 1984 and 1989. 49 examples of the model were built for North American railroads. All but 4 of these units were ordered by Norfolk Southern. The remainder were 3 units ordered by Burlington Northern Railroad, and a GE demonstrator unit.

Dash 8-39B (B39-8)
A total of 145 examples of this model were manufactured from 1984. Its external appearance is almost the same as that of the later Dash 8-40B model, with the obvious exception of the trucks. The first three Dash 8-39Bs were built for Atchison, Topeka and Santa Fe Railway (ATSF). A fourth example of the model, a GE demonstrator designated as a Dash 8-39BE (or B39-8E), was converted from the original Dash 8 prototype. There were also two much larger groups of this model: 102 Dash 8-39BEs were fabricated for Locomotive Management Services (LMSX) and placed on long term lease to Burlington Northern Railroad. The remaining 40 were built for the Southern Pacific Railroad.

Dash 8-40B (B40-8)
In 1988 and 1989, a total of 150 units of this model were produced. Substantial orders for the model came from ATSF (40 units), Conrail (30 units), New York, Susquehanna and Western Railway (24 units), and the model's biggest customer, St. Louis Southwestern Railway (54 units). There were also small orders from Providence and Worcester Railroad (4 units), the United States Department of Energy (Savannah River Site), and a GE demonstrator unit.

Dash 8-40BW (B40-8W)
Eighty three examples of this model were built for ATSF in the early 1990s. ATSF was the only railroad to order it. There was also one GE prototype and testbed, rebuilt from the prototype B39-8E. The "W" suffix to this model's name indicates that it differs from the B40-8 in having a "wide nose" safety cab. GE was almost commissioned by ATSF to make a B unit (cabless booster unit) version of this model, but because the price would have been the same for B40-8Ws with cabs or without, ATSF decided to order units with cabs only. All of ATSF's B40-8Ws became part of BNSF, and many were later repainted into one of BNSF's liveries. Some units have since been sold to other operators.

Six Axle Models
Common features
Specifications common to all Dash 8 Series six axle models, except where stated, are as follows:

Dash 8-32C (C32-8)
This was one of the earliest models in the Dash 8 Series. Only 10 of the model were built, in 1984. All of them were delivered to Conrail. Initially, these units were painted in Conrail's standard blue livery. In 1997, Conrail assigned all 10 of them to "Ballast Express" service, and they were repainted into a gray version of the Quality scheme. One C32-8 was eventually bought by Brasil Ferrovias (BF), after being retired by Conrail. However, this unit developed problems with its electronics, and was therefore decommissioned to supply parts for the mechanically similar C30-7As operated on the Cutralle–Quintela railroad.

Dash 8-39C (C39-8)
Between 1984 and 1987, a total of 161 examples of this model were produced for two North American railroads: Norfolk Southern and Conrail. An initial batch of 114 of the standard version of this model was built for Norfolk Southern, which then ordered a batch of 25 examples of the C39-8E (Enhanced) model, with a carbody similar to that of the C40-8. Conrail ordered 22 of the standard version. After the Conrail split in 1999, 13 units of this order went to Norfolk Southern and the remaining 9 units went to CSX.

Dash 8-40C (C40-8)
This was the first model of any locomotive series to be fitted with microprocessor-equipped engine control units. A total of 581 examples of the model were manufactured between 1987 and 1992. The C40-8 has a traditional narrow short hood, but otherwise its external appearance is almost the same as that of the later Dash 8-40CW model. The most important customer for this model was UP, which ordered 257 of them. Other large orders for the model came from Chicago and North Western Transportation Company (77 units), Canadian National (53), Conrail (25), CSX (147) and Norfolk Southern (75). The remaining four units were supplied to Estrada de Ferro Carajás of Brazil.

Dash 8-40CM (C40-8M)
Mechanically identical to the Dash 8-40C (see above) and Dash 8-40CW (see below), this model was constructed between 1990 and 1994 only for Canadian railways, with a production total of 84 units. The model is distinguished from the Dash 8-40CW by the addition of a full-width cowl body and the use of a Canada-specific nose and windshield configuration. BC Rail ordered 26 examples of the model, Canadian National ordered 55, and Quebec North Shore and Labrador Railway acquired the remaining three.

Dash 8-40CW (C40-8W)
Early versions of this model differ from the Dash 8-40C only in having a "wide" or "safety" cab. A total of 756 examples of the model were built, with the first being delivered to Union Pacific in 1990. The C40-8W was continuously upgraded over the course of its production. Later model Conrail units were built with split cooling systems for the turbocharger intercooler and engine cooling (previous Dash 8 series had both on the same cooling system). The units delivered to Conrail in 1993 and 1994 were equipped with GE's Integrated Function Displays (IFD). Some of the C40-8Ws operated by Conrail were lease units owned by LMSX. The other railroads that operated C40-8Ws as original owners were ATSF and CSX.