The C40-9 featured the standard cab design and was the only model in the Dash-9 series to do so. It is essentially identical to the wide-cab C40-9W model otherwise. All units had rooftop-mounted air conditioner units which gave them their distinct "top hat" look.

Norfolk Southern Railway (NS) was the only operator of this model. The company owns 125 units, numbered 8764–8888.NS specifically requested the standard cab and may have purchased more units had the Federal Railroad Administration not required it to purchase the wide-cab C40-9W version instead.

Also in 2015, NS 8879 became first NS GE Dash 9-40C to be converted from DC to AC traction. The locomotive was rebuilt with a new GE wide nose and cab, and had locomotive speed limiter (LSL) and cab signals installed. These traction motor replacements are part of a Norfolk Southern / General Electric project to test the economic feasibility of converting Norfolk Southern's large (125 units), but relatively old Dash 9 fleet to AC traction. (BNSF Railway is also considering a similar upgrade program for its even bigger - originally 1,797 units - C44-9W fleet). Work on the 8879 was sub-contracted out to and completed by American Motive Power, Inc. (AMP) in Dansville, New York. Two more units were soon added to the conversion program, NS C40-9 8799 and NS C40-9W 8900. Norfolk Southern's units will be called AC44C6M. 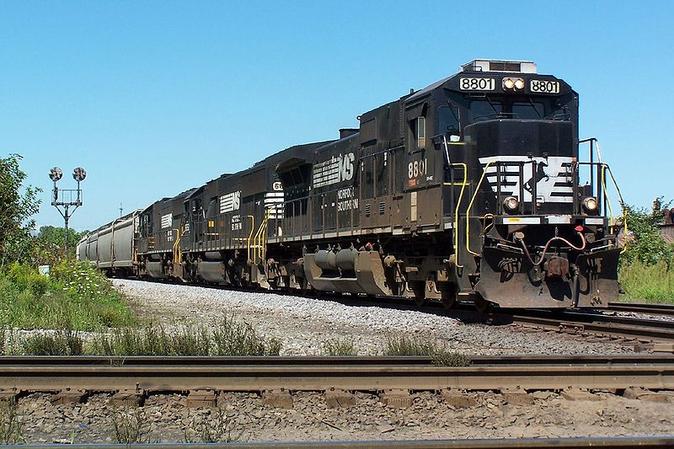