GE E60 Electric Locomotive
The GE E60 is a C-C electric locomotive made by GE Transportation Systems. The E60's were based on existing locomotives designed for freight service. There are several versions of E60's: E60C, E60CP, E60CH, and E60C-2.

E60C
Black Mesa and Lake Powell Railroad (BM&LP) ordered 6 E60C's between 1972 and 1976 to transport coal 78 miles from the Black Mesa Mine near Kayenta, Arizona to the Navajo Generating Station power plant at Page, Arizona. These E60C's have only single cabs and single pantographs. The E60C's collect the power via 50,000 volt overhead catenary supplied by their power plant at Page, Arizona. The road numbers are between 6001 and 6006. At this time March 2012, Black Mesa is operating six ex-NdeM E60's and the 6006. The 6001 was donated to a railway museum. Deseret Power Railroad located near Rangely, Colorado is also a 50kV operation and started out with two new E60's which were built in 1983 along with 39, 25 kV locomotives that were built for NdeM in Mexico. Deseret acquired two second hand NdeM units in 1998 and put one in service with their spare 50 kV transformer. Three additional NdeM units that had not been energized since manufacture were acquired in 2009, one is in service with a rewound main transformer, the operating is up to four units. BHP's Navajo Mine Railroad near Farmington NM operated with two secondhand ex-Amtrak E60C's converted from E60CH's and E60MA's. A third ex-Amtrak unit was acquired from NJ Transit after a wreck. BHP now operates three ex-NdeM E60's, a fourth ex-NdeM unit is being acquired from Texas Utilities. The Deseret and NdeM E60's have the latest GE propulsion control including power factor correction and the wheelslip control borrowed from the Dash-7 diesels.

Their initial weight was 193.5 short tons (175.5 t; 172.8 long tons), resulting in an axle load of 32.25 short tons (29.26 t; 28.79 long tons) which was significantly more than any previous American electric passenger locomotive,[citation needed] which contributed to poor running during testing. The locomotives had a tendency to yaw sideways when accelerating, placing high stress on the rails. The Federal Railroad Administration only allowed the E60s to operate at 90 mph (140 km/h), not the intended 120 mph (190 km/h), after they derailed twice during testing. (Amtrak limited them to 80 mph or 130 km/h after 1978; after their rebuilding they reverted to 90 mph or 140 km/h.)

When the E60s returned to service, they were used mainly on heavy, long-distance trains, such as the Crescent, Silver Meteor, and Broadway Limited, in addition to Clockers and special movements including circus and mail trains, or maintenance of way runs.

All Amtrak E60 units were retired in 2003. In April 2004, the Railroad Museum of Pennsylvania acquired Amtrak E60 603 for preservation. NJ Transit 958 was also preserved and was donated to the United Railroad Historical Society of New Jersey. All other units were scrapped.

These locomotives were intended for use on a new double-track electric line between Mexico City and Irapuato, but economic conditions delayed the project and prevented its completion as planned. On February 24, 1994, 28 of the locomotives were finally placed in operation by NdeM on a shortened version of the project, but six of these were soon wrecked. Eleven others remained in storage. When the NdeM was privatized in 1997, the 22 operating E60C-2s passed to Grupo Transportación Ferroviaria Mexicana (TFM), and the unused 11 remained in storage in government ownership. Most of the catenary was soon removed for increased vertical clearance; TFM (being partly owned by Kansas City Southern) had introduced doublestack container trains whose profile intruded into the AC "spark zone" radiating from the wires, Hanson-Wilson Engineers (Kansas City) supported by PGH Wong Engineering, was proceeding with the redesign of the Catenary system to reconfigure it to provide the needed clearance, when TFM suspended the work and removed the catenary system for cost and schedule reasons.

All of the E60C-2s have been offered for sale since, and 22 of them were sold back to GE for more GE AC4400CWs. Three E60C-2s were sold to Texas Utilities (TXU) to serve the company's Martin Lake Line in 1999. BM&LP acquired several E60C-2s to replace their own aging E60Cs. The Deseret Power Railroad acquired 7 E60C-2s to ship coal over the 35-mile stretch from the Deserado Coal Mine located near Rangely, Colorado to Deseret's Bonanza Power Plant located near Bonanza, Utah. Seven were acquired in 2006 by the Montréal Agence métropolitaine de transport (AMT) in Québec.
Five units, EA011, EA016, EA014, EA025, and EA019, part of the Montréal AMT group, were seen in transit on CSX on April 13, 2008, in Syracuse, New York. The train hauling the units operates from Montreal to Selkirk (near Albany), New York. The units were delivered to the Susquehanna Locomotive and Car Shops located in the former NYS&W shops in Utica, NY. They were bought by a Mexican oil company for the electrical components. What was not taken by the oil company was parted out by SL&C and the balance of the units scrapped. Some of these locomotives had never been used and still had the desiccant bags stuffed in the control cabinets. 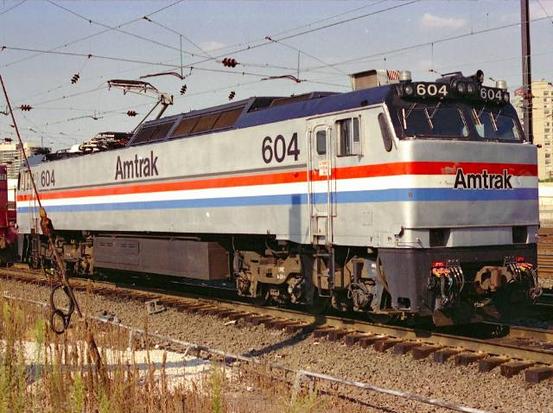 An Amtrak E60MA No. 604 with Phase III paint scheme in Philadelphia. Photo by Chao-Hwa Chen. 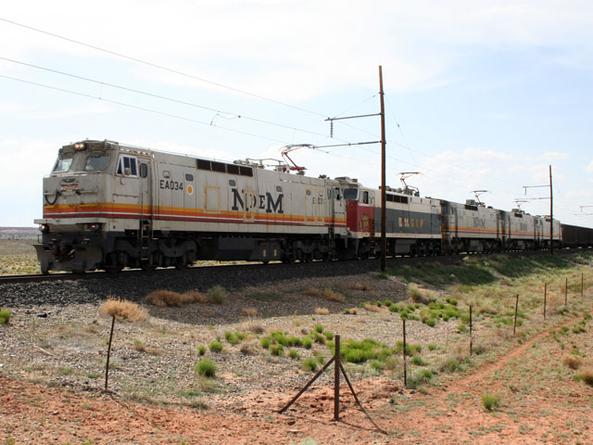 A former NdeM E60 leads a train on the Black Mesa and Lake Powell Railroad in 2007.