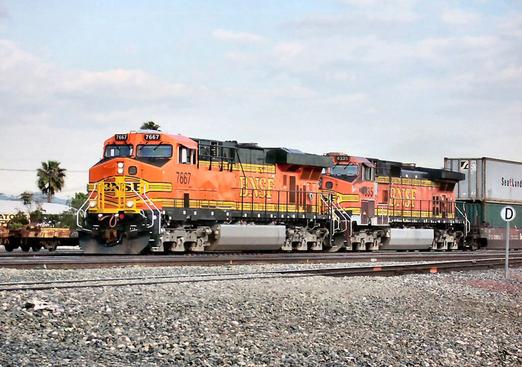 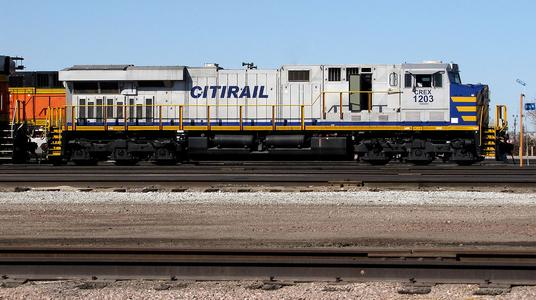 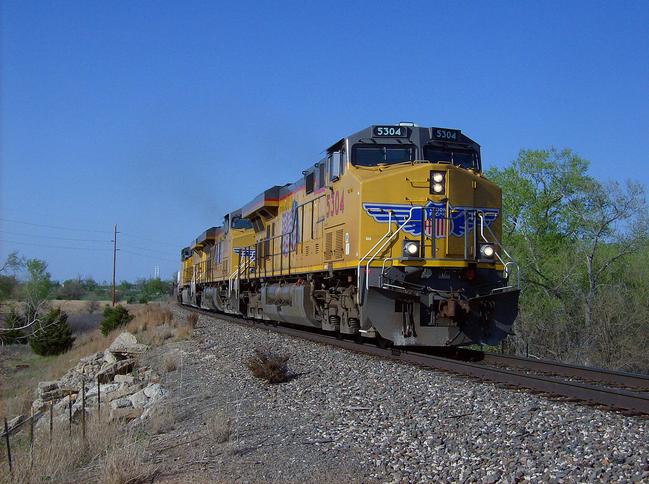 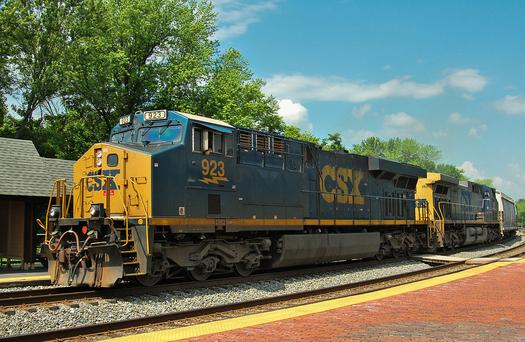 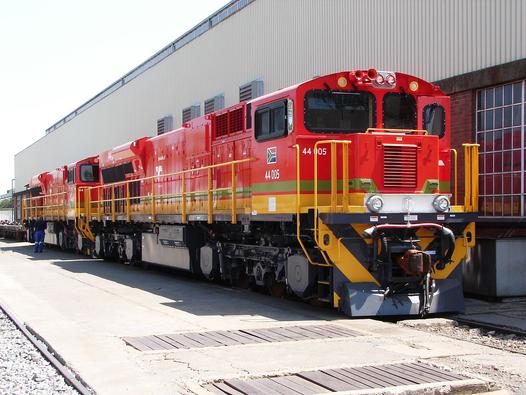 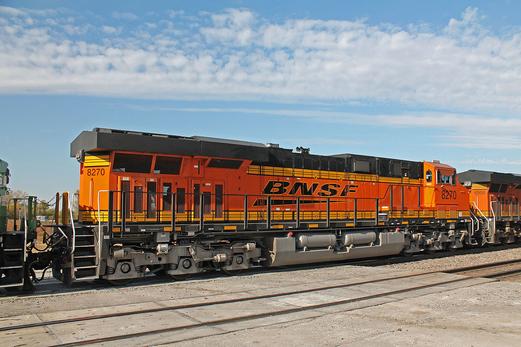 GE Evolution Series Diesel-Electric Locomotives
The Evolution Series is a line of diesel locomotives built by GE Transportation Systems, initially designed to meet the U.S. EPA's Tier 2 locomotive emissions standards that took effect in 2005. The first pre-production units were built in 2003. Evolution Series locomotives are equipped with either AC or DC traction motors, depending on the customer's preference. All are powered by the GE GEVO engine.

The Evolution Series was named as one of the "10 Locomotives That Changed Railroading" by industry publication Trains Magazine. It was the only locomotive introduced after 1972 to be included in that list.

The Evolution Series, mainly the ES44DC, ES44AC, and ET44AC, are some of the best-selling and most successful freight locomotives in United States history, far surpassing EMD's output.

Models
Currently, six different Evolution Series models have been produced for the North American market. They are all six axle locomotives and have the wheel arrangement C-C (AAR classification) or Co'Co' (UIC classification), except for the ES44C4 which has an A1A-A1A wheel arrangement and the metric-gauge version developed for the Brazilian network ES43BBi which is B-B-B-B. All North American Evolution Series locomotives are equipped from the factory with a Nathan-Airchime K5HL-R2 "Evolution" airhorn, and most later models are equipped with a Graham-White 373 (electronic) E-BELL.

CSX began receiving an order of 200 ES44AC's (referred to by CSX as the ES44AH) in December 2007. The "H" in ES44AH stands for "heavy", which is in reference to a combination of subsystems that produce high levels of tractive effort at low speeds. In order to be classified as an "AH" by CSX, a locomotive has to have not only an increased nominal weight (currently to 432,000 pounds or 196,000 kilograms), but also (1) steerable trucks, (2) TM3 adhesion control software, (3) software that extends to 33,000 pounds (15,000 kg) from 30,000 pounds (14,000 kg) the maximum amount of tractive effort that each traction motor is permitted to produce, and (4) GE's Rail Cleaner, which directs high-pressure air onto the rails in front of the sand nozzles forward of axle number one.

All KCS units are painted in the retro Southern Belle scheme.

Citirail/CREX acquired 100 ES44AC's for lease service. They are painted gray with blue & yellow nose striping and blue numbers. Most, if not all of these units, are leased to BNSF Railway.

In 2013, General Electric built one ES44AC, GECX 3000, as a test bed for their NextFuel natural gas power kit. The engine runs on liquefied natural gas from a fuel tender. The unit is currently part of BNSF's GE LNG test set, partnered with BNSF ES44AC No. 5815.

ES44C4
The ES44C4 (Evolution Series, 4400 HP, C-C wheel arrangement, 4 traction motors) was introduced in 2009. While similar to the ES44AC, the ES44C4 has two traction motors per truck, instead of the conventional three such as on the ES44AC. The center axle of each truck is unpowered, giving an A1A-A1A wheel arrangement. BNSF Railway is the launch customer for this model, ordering an initial batch of 25 units numbered 6600-6624. As of 2015, BNSF Railway currently rosters over 900 ES44C4 units. On January 30, 2014 Florida East Coast Railway announced that they would buy 24 ES44C4's, to be numbered 800-823, for heavy haul service and intermodal traffic. All were delivered by the end of 2014, in order to beat the EPA's deadline on exhaust-emissions standards for new-built Tier 3 locomotives.

A unique feature of these units is that there is a variable traction control system in their computer systems. One of the differences between an ES44AC and an ES44C4 are the air cylinders and linkages on the truck sideframes of the ES44C4; these are part of the traction control system. Every time a variation in grade, traction, or wheel slip occurs, the computer will adjust the pressure in these cylinders to maintain sufficient adhesion, by varying the weight on the drive axles.

The ES44ACi/DCi is essentially an ES44AC/DC in a GE AC6000CW's body, with the radiator at the end protruding out over the rear deck in the same way the AC6000CW's does. The locomotive's large radiator allows it to handle the Australian outback's extreme temperatures.

ET44AC/ET44C4
The ET44AC (Evolution Series Tier 4, 4400 HP, AC traction) replaces the ES44AC model. These locomotives have been ordered by most of the Class I railroads in North America, including: Union Pacific, CSX Transportation, Norfolk Southern and Canadian National Railway. BNSF Railway will be receiving similar ET44C4's which have no traction motor on the middle axle of each truck.

In the summer of 2012, GE unveiled its first Tier 4 emissions-compliant locomotive, now officially named the ET44AC. The prototype demonstrators, as well as current production units, are visually quite different from previous models. First, the "ET" is 74 ft. 6 in. long - an increase of 16 in. from the 73 ft. 2 in. length of all previous GE 6-axle models beginning with the "DASH 9" series in 1993. While the front third of the locomotive, including the control cab, is basically unchanged, the rear two-thirds is noticeably different. On Tier 4 demonstrator units the entire midsection above the prime mover is raised to accommodate an advanced exhaust treatment system; it is seen as a "hump" that rises above the rest of the locomotive considerably. Production units have this hump only over the exhaust manifold directly ahead of the radiator, rather than encompassing the entire midsection. In addition, the radiator section is much larger than that of earlier "ES" units, featuring a two-fan split-cooling system located inside a very large, angular compartment. Grilles under the radiator section have been smoothed out, and there are two extra air intakes on the rear of the locomotive hood. ET44ACs are all equipped with Graham-White electronic bells (E-bells). Tier 4 demonstrator units are equipped with two airhorns: a three-chime horn - facing forward - located behind the cab and a rear-facing two-chime horn protruding from the back of the radiator. Production units feature the now-standard Nathan-Airchime model K5HL-R2 "Evolution" airhorn mounted on the hood slightly forward of the placement location used on previous models.

Canadian Pacific Railway:
291 ES44AC units, numbered 8700–8960 and 9350-9379.
8700–8759 were built with GE self-steering trucks. Later orders specified the standard Hi-Adhesion trucks due to the higher maintenance costs of the steerable design.
8858–8877 were painted to promote the 2010 Winter Olympics in Vancouver. Effective March 4, 2010, all 20 Olympic units have been earmarked to be sent to Progress Rail in Winnipeg for removal of Olympic logos and repainting of the logo area to the original red and white scheme. As of 2015, 8876 still wears the Olympics paint.
8890–8899 are fully equipped with ECP braking technology, which CP is testing on its coal fleet.
8700–8960 and 9350–9379 are equipped with FTO. 8939 wears stickers on the front of either side promoting the Lord Strathcona's Horse.

Export Sales
China
In October 2005 China Railways ordered 700 Evolution Series locomotives, ES59ACi, from GE Transportation Systems and Qishuyan Locomotive and Rolling Stock Works for delivery in 2008–2009. Two have been built at Erie, Pennsylvania, the rest will be assembled by Qishuyan at Changzhou.

Kazakhstan
On September 28, 2006 national railway Kazakhstan Temir Zholy signed an agreement with GE Transportation Systems ordering 310 Evolution Series locomotives designated as the TE33A. The first ten of these were built in GE's Erie, Pennsylvania, plant while the remaining 300 will be assembled at a new plant in Astana, Kazakhstan which was opened by President Nursultan Nazarbayev on 3 July 2009. Delivery is expected between 2009 and 2012. The locomotives are built with dual cabs and are among the first diesel-electric locomotives with AC traction motors to operate in the Commonwealth of Independent States (other than the 2TE25A built by Bryansk Engineering Works, Transmashholding, Russia).

Australia
Rio Tinto Group has ordered 100 ES44DCi locomotives for operation on their privately owned rail line, operated by Pilbara Iron. The ES44DCi uses the AC6000CW's longer frame to allow space for a heavy duty cooling system to cope with the hot desert environment that the locomotives operate in. Units 8100-8118 were delivered in a predominantly grey paint scheme, while units 8119-8199 feature additional red lettering and striping.

Rio Tinto Group has ordered 21 ES44ACi of 'EVO' units, an AC version of the ES44DCi. These units are numbered from 9100 onwards and more are on order. They are in the Rio Tinto silver with red stripes and numerals.

The first six of these Class 44-000 locomotives were built in Erie, Pennsylvania in April and July 2015. In October 2015, the first of the 227 South African-built locomotives was nearing completion at Transnet Engineering's Koedoespoort shops in Pretoria.

India
In November 2015, it was announced Indian Railways and GE would engage in an 11-year joint venture in which GE would hold a majority stake of 74%, to provide a mix of 1,000 diesel locomotives of 4,500 and 6,000 horsepower each. General Electric has invested ₹2,052 crore (US $305 million) for its construction. In the $2.6 Billion deal, Indian Railways would purchase 100 goods locomotives a year for 10 years beginning in 2017; the locomotives would be modified versions of the GE Evolution series. The diesel locomotive works will be built by 2018; GE will import the first 100 locomotives and manufacture the remaining 900 in India from 2019, also assuming responsibility for their maintenance over a 13-year period. 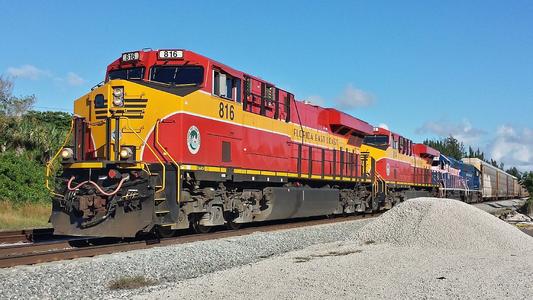