Amtrak P42DCs No. 1 and No. 56 pulling the eastbound California Zephyr at Grand Junction, Colorado, April 2012.

Amtrak P40DC No. 823 on the Texas Eagle. This P40DC is one of the 15 P40DCs of Amtrak that returned to service after being out of service for years. 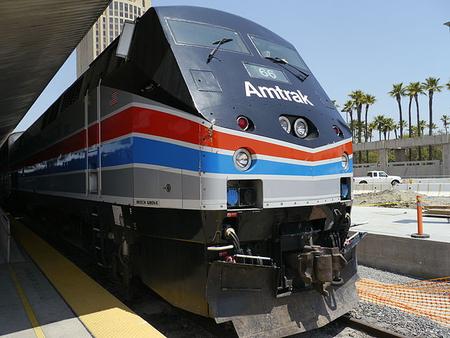 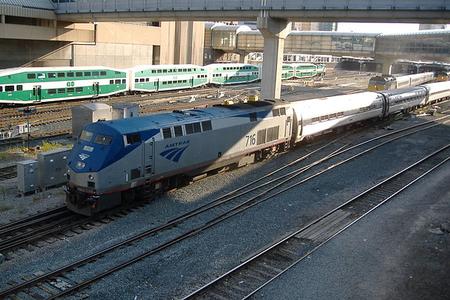 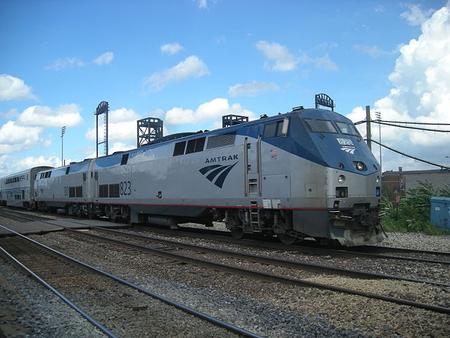 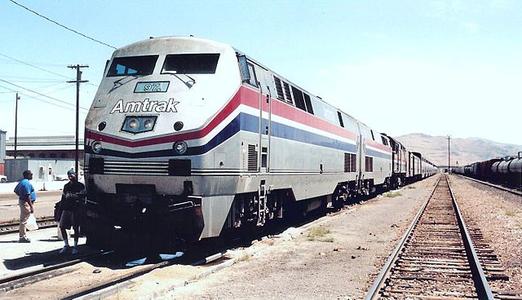 GE Genesis Series Passenger Locomotives
General Electric Genesis (officially trademarked GENESIS) is a series of passenger locomotives produced by GE Transportation Systems, a subsidiary of General Electric. Between 1992 and 2001, 321 units were built for Amtrak, Metro-North, and Via Rail.

The Genesis series of locomotives was designed by General Electric in response to a specification published by Amtrak and ultimately selected over a competing design presented by GM EMD. The Genesis series are unique among current North American diesel-electric locomotives because of their low height. This height restriction allowed the locomotive to travel easily through low-profile tunnels in the Northeast Corridor. The Genesis series is lower than even the previous-generation F40PH by 14 inches (356 mm), and is the only Amtrak diesel locomotive that meets the clearance or loading gauge requirements on every Amtrak route.

Technical design
The GE Genesis series is unique among recently manufactured North American passenger locomotives in that it uses a single, monocoque carbody design, thus making it lighter, more aerodynamic, and more fuel efficient than its predecessors (F40PH, F59PH, P30CH, P32-BWH). However, this makes it more costly and time-consuming to maintain and repair. Amtrak is installing bolt-on nose cones on its units for easy replacement in the event of a grade crossing collision with a vehicle. As an example of the improvements over the predecessor locomotives, the Genesis is 22% more fuel-efficient than the F40PH while producing 25% more horsepower. In addition, all Genesis locomotives have four-stroke engines instead of the two-stroke engines previously used in EMD counterparts.

The Genesis unit is a fully computerized locomotive which automatically controls all on-board functions, thus producing high reliability while keeping the maintenance requirements low. For example, its computers can automatically reduce the power plant's output in the event that the locomotive is overheating, or suffering from low oil pressure, low water pressure, or reduced airflow into the intakes, thus making it still operable.

All Genesis engines can provide head-end power (HEP) to the train drawn from an alternator or inverter powered by the main engine at a maximum rating of 800 kilowatts (1,100 hp), making each unit capable of providing HEP for up to 16 Superliner railcars. The P40DC and P42DC power plants can supply 60-hertz head-end power either from the HEP alternator with the engine speed-locked to 900 rpm (normal mode) or from the traction alternator with the engine speed-locked to 720 rpm (standby mode). In the latter case, traction power is unavailable. The P32AC-DM powerplant does not have to be locked at a certain rpm because it utilizes an HEP inverter, which allows the prime mover to run at 1047 rpm when providing both traction power and HEP, and to idle at 620 rpm (or notch three) while still providing HEP for lighting and air-conditioning when not providing traction power.

Models
There are three models of Genesis units in operation today: P40DC, P42DC, and P32AC-DM.

A feature unique to the P40DC and P32AC-DM is a hostler stand at the rear of the locomotive providing increased visibility and reversing capabilities to the engineer while conducting reverse operations. When a unit is in operation from this stand it is limited to 10 mph (16 km/h) and a dead man's switch protects against movement without an operator being present. Two unique features to the original P40DC are the two strobes above the cab and an emergency flasher between the strobes. When they were overhauled, those features were removed, likely due to complaints from engine crews.

Both the P40DC and P42DC allowed Amtrak to operate heavy long-distance trains with fewer locomotives compared to the older EMD F40PH locomotives. Two P40DCs could do the same work as three F40PHs. Additional deliveries of the P42DC ended up replacing the P40DCs. Three units had been wrecked (819 in the 1993 Big Bayou Canot train wreck and 807 and 829 in the 1999 Bourbonnais, Illinois, train accident) and scrapped. Eight were leased and later sold to the Connecticut DOT for Shore Line East in 2005, and four were rebuilt and sold to New Jersey Transit in 2007. The remaining 29 units were placed out-of-service for many years. 15 of these units have been rebuilt using 2009 ARRA stimulus funds and returned to service, now in the Phase V livery, except for 822, which is painted in Phase III Heritage livery for Amtrak's 40th Anniversary.

Amtrak 822: Amtrak 40th Anniversary Phase III livery
Upgraded and "Stimulus" P40DCs
By 2007, New Jersey Transit had upgraded their P40DC units with updated prime movers to match the 4,250 horsepower (3,170 kW) of the successor P42DC. This was done by readjusting the position of the lay shafts within the prime mover.

Amtrak has returned 15 of their P40DC units to service as part of a project funded through the American Recovery and Reinvestment Act of 2009. The first of the units were returned to service in March 2010 after being overhauled at the Beech Grove Shops. They were upgraded like NJT's units had been a few years before to have 4,250 hp (3,170 kW) and match the P42DC's maximum speed of 110 mph (177 km/h). They also received updated cab signaling systems. The upgraded locomotives still have mechanical air brakes, which makes them most suitable for trains that only require a single locomotive. This differs from the electronic air brakes on the P42DC and P32AC-DM. They also feature a builder's plate indicating that they were rebuilt under the auspices of the TIGER stimulus program.

P42DCs are used primarily on most of Amtrak's long-haul and higher-speed rail service outside the Northeast Corridor, as well as a service with speeds up to 160 km/h (99 mph) on Via Rail's Quebec City-Windsor rail corridor when it replaced the LRC locomotives in 2001. VIA's P42DCs are known as EPA-42a and also have a third headlight above the original cluster.

The Dual Mode P32AC-DM is unique as it is equipped with GE's GEB15 AC (alternating current) traction motors, rather than DC (direct current) motors as used in the other subtypes. It is also only one of two modern American diesel-electric locomotives with third-rail capability, along with the EMD DM30AC operated by the Long Island Rail Road. The British Rail Class 73 and Class 74 also have this capability. The model is confined to services operating from New York City, where diesel emissions through its two fully enclosed main terminal stations are prohibited. P32AC-DMs are seen only on Amtrak's Empire Corridor between Penn Station and Buffalo, the Ethan Allen Express, Lake Shore Limited (New York section), Adirondack, and Maple Leaf services. However, sometimes the P32AC's are traded out for a P42DC at Albany. This is due to the requirement for the P32AC-DM engines exclusively in this section of rail, and the higher horsepower rating of the P42DC. Metro-North's push-pull trains to and from Grand Central Terminal also utilize P32AC-DM units, and Metro-North's units have an escape hatch in the nose.

All P32AC-DM models, unlike the P40DC and P42DC models, lack the door on the rear of the locomotive that would normally lead to the next car, making it impossible to access the locomotive from either a coach or a trailing engine. Another unique feature is that the two lower vents near the back of the locomotive are bigger than that of the P40s and P42s. 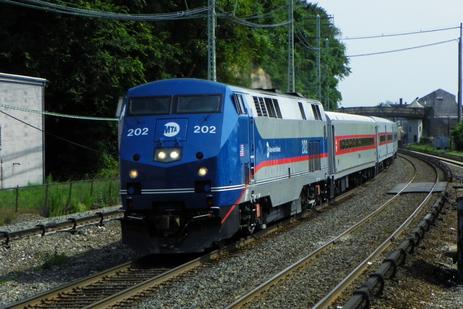 Via Rail P42DC No. 901 leaving Toronto on its way to Montreal. 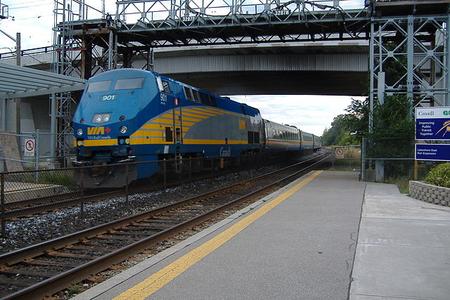 By Bebo2good1 at English Wikipedia - Own work, GFDL, https://commons.wikimedia.org/w/index.php?curid=11999212

Amtrak P42DC No. 97 with the westbound California Zephyr at Sparks, Nevada, September 1998. 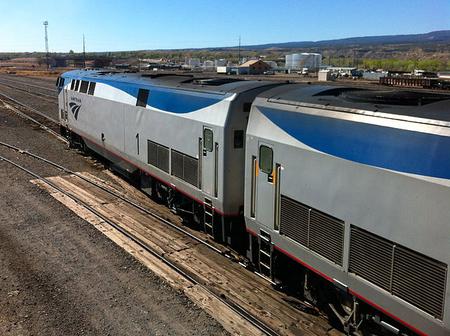