Amtrak P30CH No. 712 in Southern Pacific service on the Peninsula Commute in 1978. Photo by Drew Jacksich. 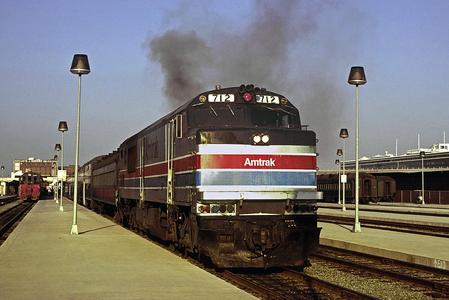 GE P30CH Diesel Locomotive
The GE P30CH (nicknamed "Pooch" because of the similarity of the designation) was one of the first brand-new diesel-electric locomotives built for Amtrak in the company's early years. The design was based on the GE U30C, but had a cowl carbody like its EMD competitors. Amtrak operated them from 1974–1992.

Amtrak ordered 25 P30CHs in 1974, following up on its order of 40 EMD SDP40Fs in 1973. The P30CH was the first Amtrak diesel locomotive built from the factory to offer HEP (head end power) in the form of 2 Detroit Diesel generator sets, each rated at 375 kW. The six-axle P30CHs, which cost Amtrak $480,000 each, were plagued with mechanical problems and were never very popular with crews or Amtrak management. In the mid-1970s Amtrak moved away from six-axle designs in favor of four-axle units as four-axle locomotives could better handle routes with numerous curves.

Amtrak leased fifteen to the Southern Pacific Railroad in 1978 for use on the Peninsula Commute between San Francisco and San Jose, California. Caltrans leased several P30CHs for its abortive Oxnard–Los Angeles "CalTrain" commuter service. In the later years of their Amtrak careers, the locomotives were used regularly into the mid-1980s on the Sunset Limited and Auto Train routes. They had their final runs in late 1992; none were preserved.

Original owners
GE produced 25 P30CHs, all of which were delivered to Amtrak:
Original Owner: Amtrak