GE U18B Diesel Electric Locomotive
The GE U18B diesel-electric locomotive was introduced by GE Transportation as a branch line road switcher in 1973. Easy to spot due to its relatively short length — 54 ft 8 in (16.66 m) — it was the only North American locomotive powered by the 8-cylinder 7FDL engine.

The Seaboard Coast Line Railroad (SCL) bought 105 U18Bs, far more than the second-best U.S. customer, the Maine Central Railroad (MEC), which ordered 10. Most of the SCL and MEC U18Bs rode on refurbished Blomberg trucks, recycled from old  EMD locomotives, making the U18B even more visually distinct from other GE locomotives.

Many railfans refer to the GE Universal Series locomotives as "U-Boats." Due to its smaller size, the U18B received the nickname "Baby Boat."

Not many U18Bs still exist, but some short line railroads, such as the Pickens Railway, still have several U18Bs in everyday service.

GE included information about a B18-7 locomotive (which would have followed the U18B) in its 1978 "Series-7 Road Locomotives" service manual, but none of these updated units were ordered, sold, or built. 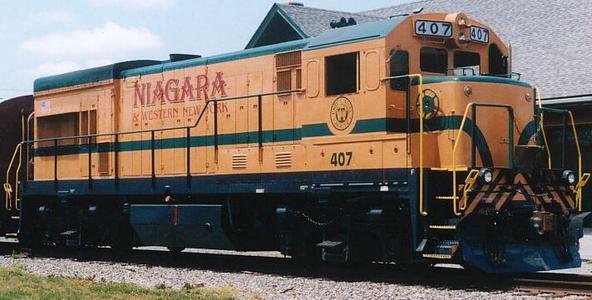