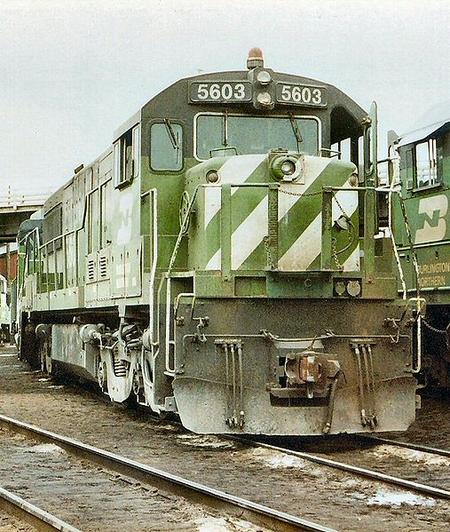 GE U25C Diesel-Electric Locomotive
The U25C was General Electric's first six-axle road switcher intended for the United States domestic market. Launched in September 1963, it remained in production until December 1965. It was replaced by the U28C.

Development
The origin of the U25C grew out of the need for six axle locomotives to operate on a 12-mile heavy haul railroad to construct Oroville Dam. The General Electric salesman to Oro Dam Constructors offered essentially a U25B riding on six axle trucks. When the salesman got back to GE's Erie Plant it was discovered that no six axle U25 was available, nor did GE wish to construct a domestic six axle road switcher until the horsepower threshold reached 3000 horsepower. Rather than lose the four unit sale GE quickly began a design of a six axle U25 that relied heavily on the U25B for engineering. The U25C was longer than the U25B by four feet four inches. The extra length was needed to accommodate the improved Trimount trucks. Completed in September 1963 the U25C was the first six axle unit of the second generation of dieselization. Following quickly on the Oro Dam Constructor's order was an order by Atlantic Coast Line for four U25Cs. The ACL also ordered the first four Alco C628s. Both of these ACL orders were delivered in December 1963.

Phases
The following are normally identified as U25C phases:

Phase I
Phase I units were built from September 1963 to May 1964. These units featured a 2900-gallon fuel tank with the air tanks on the ends of the tank. The early U25Cs had louvers on the equipment boxes under the engineer's side of the cab. Oro Dam Constructors Nos. 8010-8016 and Atlantic Coast Line Nos. 3000-3003 were the only examples.

Phase II
Phase II units were built from May 1964 to November 1964. These units had a 3500-gallon fuel tank. The air tanks were relocated to inside the carbody behind the cab. Louvers were placed in the long hood behind the cab for ventilation of the air tanks. There were 24 Phase II units. They were built for Northern Pacific Nos. 2500-2514, Lake Superior & Ishpeming Nos. 2500-2501, and Atlantic Coast Line Nos. 3004-3010.

Phase III
Built from April 1965 to July 1966. The Phase III units were the most numerous and included the Upgraded U25Cs. A total of 78 U25Cs were built with this carbody. The Phase III U25C carbody overlapped into early Phase I U28C production. A total of 28 Phase I U28Cs used this same carbody. The Phase III had screened panel openings in the carbody behind the cab. Louvers were eliminated from the left side of the carbody, but kept on the engineer's side. A rectangular box opening on the roof provided fresh air for ventilation and cooling the air tanks. Pennsylvania and L&N U25Cs also had an extra equipment box and third handrail stanchion on the raised part of the walkway next to the radiator intake. The extra equipment box was for extended range dynamic brake contactors. In later Phase III production screened doors replaced the screen panels behind the engineer's side of the cab. The louvers behind the engineer's side of the cab were also removed in late production Phase III units.

Preservation
The only U25C preserved is Lake Superior and Ishpeming No. 2501 displayed in Marquette, Michigan.