A Union Pacific advertisement featuring UP GE U50 No. 32. 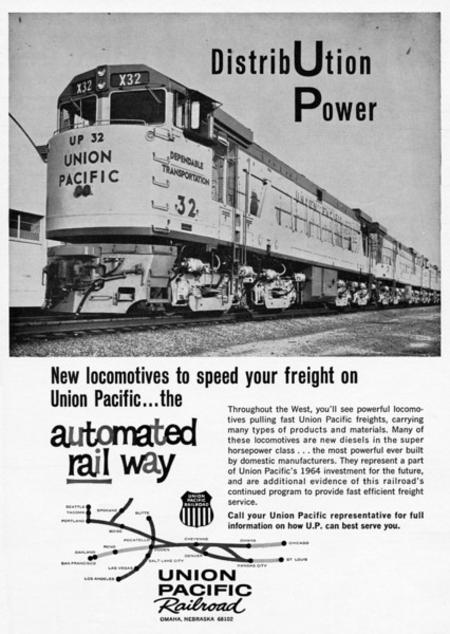 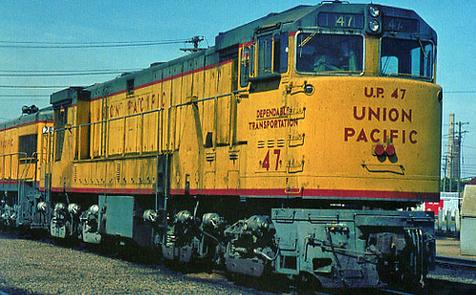 Configuration
The U50 rode on four two-axle trucks, grouped in pairs linked by span bolsters, giving a wheel arrangement of B+B-B+B. The trucks and bolsters were re-used from scrapped UP turbine locomotives built by GE during the 1950s. The U50 was built in response to the Union Pacific Railroad's requirement, issued in the early 1960s, for a 15,000 hp (11,200 kW) 3-unit locomotive intended to replace the turbines. The design was effectively two U25B locomotives on a single frame; each diesel engine and generator powered only the two trucks at the same end. Three were delivered to the UP in October 1963, and three to the Southern Pacific Railroad in May and June 1964. Other locomotives built to this requirement were the EMD DD35 and the ALCO Century 855.

The Southern Pacific kept the three but did not order any more. They were kept on the roster until the late 1970s, but were often sidelined. SP's units gained the nickname "Baby Hueys" from the cartoon character of the same name. Original numbers were 8500-8502; they were later renumbered 9950-9952. Southern Pacific's three units differed from the Union Pacific U50s by having a cab door and headlights in the hood beneath the front windows.

The Union Pacific was more satisfied with their three, and ordered 20 more. A batch of 12 were delivered between July and September 1964, while a final eight were built May through August 1965. They were numbered 31-53.

Most were withdrawn from service in 1973 and 1974 and traded-in to GE for more modern high-powered units, although Southern Pacific's three survived in service until 1977.

The U50 is sometimes inaccurately referred to as the U50D, a back-formation from the U50C name given to the six-axle units. The name is incorrect and was never used by the manufacturer or the railroad. The U50 did not ride on D trucks in any case. It is also sometimes referred to as the U50B, but this is incorrect as well. Some references erroneously give the wheel arrangement as B-B+B-B.