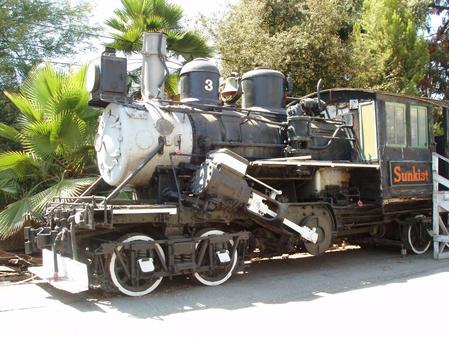 This gearing is part of the machinery within the locomotive and should not be confused with the pinion that propels a rack locomotive along the rack between the rails. The geared steam locomotives that have been built have been for conventional track, relying on the adhesion between wheels and rail.

Explanation and rationale
The steam locomotive, as commonly employed, has its pistons directly attached to cranks on the driving wheels; thus, there is no gearing, one revolution of the driving wheels is equivalent to one revolution of the crank and thus two power strokes per piston (steam locomotives are almost universally double-acting, unlike the more familiar internal combustion engine).

The maximum rotational speed is fairly fixed for a given engine technology. Given the lack of any variable-ratio transmission between the piston engine and the wheels, the designer is forced to compromise between desired torque and desired maximum speed; the radius of the driving wheels determines this. The radius of the crank affixed to the wheel is of course less than this; its radius determines the length of the piston stroke. This cannot be too large, for the locomotive will be unable to generate enough steam to supply those large cylinders at speed; it cannot be too small, or the starting torque and thus tractive effort will be too small, and the locomotive will not be able to start a train.

Many applications required a low speed locomotive with ample starting tractive effort – industrial use, mines and quarries and logging operations, steeply graded lines and the like – especially when the track is cheaply built and not suited to high speeds anyway. Unfortunately, although the trade-off of speed versus torque can be adjusted in favor of torque and tractive effort by reducing the size of the driving wheels, there is a practical limit below which this cannot be done without making the piston stroke too short on a directly driven locomotive.

The solution is to separate the crank from the wheels, firstly allowing for a reasonable piston stroke and crank radius without requiring larger than desired driving wheels, and secondly allowing for reduction in rotational speed via gearing. Such a locomotive is a geared locomotive. Most were and are still single speed, but some did employ a variable-ratio gearbox and multiple ratios.

Types of geared locomotives
The vast majority of geared locomotives in the world were built to one of three distinct designs, whether licensed and official, or clones built after the expiration of key patents. Of the types, the Shay locomotive was the most numerous and best known. The overwhelming majority operated on the North American continent, but with a number in use in various parts of South America and a fair number in Australia and New Zealand, including home-developed types.

It should be noted that these were not the first locomotives to use geared transmission. Richard Trevithick's Coalbookdale Locomotive used a large gear instead of side rods to link the crankshaft to the driving axles, with a net 1:1 gear ratio. The early Grasshopper (1832), Crab (1837) and Mud Digger (1842) locomotives built for the Baltimore and Ohio Railroad used gear ratios on the order of 2:1 so that each turn of the crankshaft caused about two turns of the driving axles. This allowed use of relatively small driving wheels without sacrificing speed.

The Climax locomotive
The Class B Climax locomotive has two inclined cylinders driving a transverse crankshaft, geared to a longitudinal driveshaft placed centrally on the locomotive and driving the powered trucks via internal gearing.

There was also an earlier Class A Climax with a vertically mounted marine-type steam engine, working through a similar drive-line, via a two-speed gearbox.

Other Types
Besides the three main designs mentioned, there were other designs and clones:

The Willamette locomotive was an improved-upon clone of the Shay locomotive produced in limited number by Willamette Iron & Steel (better known for their steam donkey engines) after key patents expired. West coast logging customers were clamoring for improvements in detail design and the application of more modern locomotive technology to the geared locomotive; Lima (manufacturers of the Shay) were dragging their heels. The Willamette was the response to that.

A & G Price of Thames, New Zealand built a number of geared locomotives, often home-grown variants of the Climax A, Climax B or Heisler types. They did however produce a type that is known as the "16-wheeler" (0-4-4-4-4-0) that was also produced by another NZ manufacturer, Johnson Brothers of Invercargill. Price's last steam engine was a Heisler locomotive, built 3 years after the last American Heisler was built.

Aveling and Porter built a few geared locomotives which were, essentially, traction engines with flanged wheels. The early ones used sprocket chain drive but later versions had spur gears.

The Avonside Engine Company produced a small number of narrow gauge geared steam locomotives for sugar cane plantations in Natal. These were similar in design to Heislers.

The Kitson-Still locomotive used different ends of the same cylinders for steam or diesel propulsion. The crank was above the frame and a gear train of fixed reduction linked it to the center axle.

Vertical boilered "coffee-pot" locomotives were often geared, though those made by De Winton were not.

Some geared steam locomotives are still at work in the sugar plantations of Indonesia, but in most countries they may now be seen only on tourist lines, preservation sites and museums. The particular advantage in cane sugar operations is the ability to use the dried solid residue of pressing the cane as a fuel of trivial cost, providing that low cost technical labor is available to maintain the locomotives.

United States
No geared steam locomotives remain in commercial use in America. However, several are in operation on tourist lines.

The Cass Scenic Railroad State Park in West Virginia uses only geared locomotives, and features the largest remaining and last Shay locomotive ever built, the 162-ton former Western Maryland Railway No. 6. The railroad also owns a Climax locomotive and a Heisler, enabling all three types to be seen.

The White Mountain Central Railroad at Clark's Trading Post in Lincoln, New Hampshire, operates Climax No. 6, built in 1920 (builder number 1603), on its tourist line. Clark's also has the last remaining Shay in New England. The Shay is non-operational but in storage. Clark's also has a 32-ton Heisler locomotive that is awaiting staybolt replacement.

A 65-ton 1922 Lima locomotive with three-truck Shay design is on static display at the Travel Town open-air museum in Los Angeles.

The Southeastern Railway Museum in Duluth, Georgia, has a two-truck Heisler (No. 9) lovingly restored on static display inside the main exhibit hall. The Heisler is painted for the Campbell Limestone Co and is in excellent condition.

The Sumpter Valley Railroad in Baker City, Oregon. Heisler shop No. 1306 in operation.

The Oregon Coast Scenic Railroad in Garibaldi, Oregon. Heisler shop No. 1198 in operation.

Canada
The Canada Science and Technology Museum in Ottawa, Ontario has an operational 50 ton class B Shay Locomotive, that is in operation Sundays and Wednesdays in July and August. 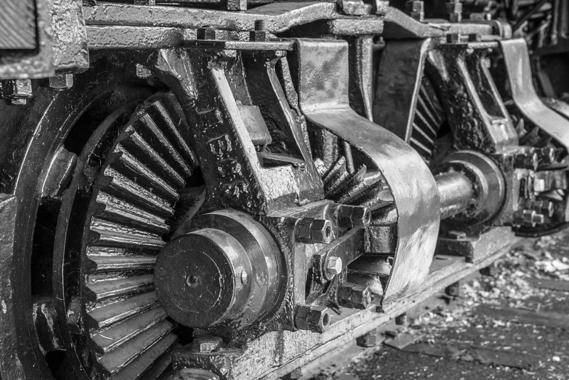 By The original uploader was Lordkinbote at English Wikipedia - Transferred from en.wikipedia to Commons. Transfer was stated to be made by User:Quatro Valvole., CC BY-SA 2.5, https://commons.wikimedia.org/w/index.php?curid=3221331 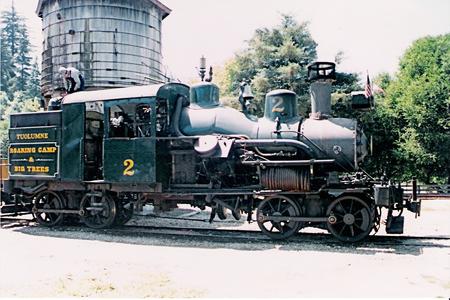 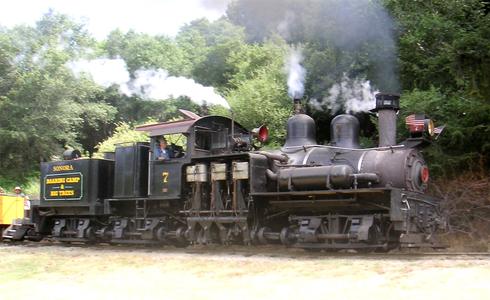