W&ARR No. 3 - The General 4-4-0 Steam Locomotive
Western & Atlantic Railroad No. 3 General is a 4-4-0 "American" type steam locomotive built in 1855 by the Rogers, Ketchum & Grosvenor in Paterson, New Jersey for the Western & Atlantic Railroad, best known as the engine stolen by Union spies in the Great Locomotive Chase, an attempt to cripple the Confederate rail network during the American Civil War. Today, the locomotive is preserved at the Southern Museum of Civil War and Locomotive History in Kennesaw, Georgia, and it is listed on the National Register of Historic Places.

Civil War: The Great Locomotive Chase
During the Civil War on April 12, 1862, The General was commandeered by Northerners led by James J. Andrews at Big Shanty (now Kennesaw, Georgia), and abandoned north of Ringgold, after being pursued by William Allen Fuller and the Texas. Low on water and wood, the General eventually lost steam pressure and speed, and slowed to a halt two miles north of Ringgold, where Andrews and his raiders abandoned the locomotive and tried to flee.

In 1864, the Battle of Atlanta had forced the withdrawal of General John Bell Hood's forces from the city. Hood ordered the ordnance depot destroyed as he left Atlanta on September 1, 1864. To this end, the General was severely damaged by being run into boxcars of ammunition and the Missouri locomotive. This was done deliberately so as to render the engine unusable for the approaching Union forces.

Post-war Service
It had been speculated by some that, after the General had been damaged, the invading Union army restored the engine and operated it. However, many historians believe that the engine was left untouched for the remainder of the war. The Union army had based its repair shops in Nashville, and there is no evidence to suggest the engine was moved there. The United States Military Railroad Service had many new or like-new engines, so they had no need to restore captured ones such as the General. The USMRR had often left the damaged equipment of a captured railroad undisturbed, and its records, having listed the General as "captured and returned," further suggest such was the case of the General.

After the war ended, the General was repaired and continued service on the Western and Atlantic. In the 1870s, the General was completely rebuilt, it had received a new pilot, boiler, and other components. Most notably, its three dome configuration was reduced to two domes, and its Radley-Hunter style balloon stack was replaced with a diamond stack, as the engine had been converted to burn coal. Indeed, the rebuilt engine had little resemblance to its original form.

Before the Civil War, most railways in the south, including the W&A, did not give their engines numbers. Rather, they were simply named, such as the General. When the railroad began numbering engines after the war, the General was the 39th engine to be acquired by the road, and was numbered accordingly. Locomotives came and went as years progressed, and by 1880, a renumbering was necessary. At this time, the General was given the number "3," being the third oldest engine that the railroad had at the time. The engine continues to carry this number today.

In the mid-1880s, the Atlanta and Florida Railroad began construction. During this time, the W&A had a locomotive surplus after buying several more modern engines, so they leased the General to the A&F from 1887 to 1888 to assist in construction.

The locomotive was originally built to the southern states standard rail gauge of 5 ft (1,524 mm). After a change to the northern states gauge was mandated by June 1, 1886, The General was converted to be compatible with the U.S. Standard Gauge of 4 ft 8 1⁄2 in (1,435 mm).

Retirement and Exhibition
General commemorative tie clasp, produced in 1964 by the Louisville & Nashville Railroad, as part of the General's tour marking the centennial of the Civil War.

The General was retired from service in 1891 and stored on a siding in Vinings, GA where it awaited its final fate. Early the next year, E. Warren Clark, a professional photographer, discovered the engine in Vinings, and approached John W. Thomas, president of the Nashville, Chattanooga and St. Louis Railway (which had won the lease on the Western and Atlantic Railroad of the State of Georgia in 1890), with the proposal of restoring the General for exhibition at the upcoming World's Columbian Exposition in Chicago. Thomas approved of the idea, and the General was soon taken to the NC&StL Ry Shops at West Nashville to be restored. At this time, the engine was given a Radley-Hunter style balloon stack similar to the engine's original, and was reverted to a wood burner. The engine had been restored by 1892, a year before the exposition. During this time, the engine traveled to Chattanooga to attend a reunion of the Army of the Cumberland veterans. This trip made apparent the difficulties associated with wood burning, so the engine was returned to a coal burner by the end of the year. The engine was given a unique new stack at this time, one that, while designed for coal burning, was styled like the original so as to give the appearance of a wood burner.

In 1901, the General was placed on display in the Chattanooga Union Depot. There, it remained on display for nearly fifty years, only being removed for short periods for exhibitions. In particular, the engine was taken to Baltimore in 1927 to participate in the Baltimore and Ohio Railroad's "Fair of the Iron Horse," then in 1933 to Chicago's "Century of Progress" Exhibition, the 1939 New York World's Fair, and finally, the Chicago Railroad Fair in 1948.

In 1957, the Louisville and Nashville Railroad had acquired the Nashville, Chattanooga and St. Louis, including its lease of the Western and Atlantic, and began planning to restore the General to operation for the American Civil War Centennial. In 1959, the General was removed from the Chattanooga Union Depot and taken to the railroad's South Louisville Shops to be restored. As part of the restoration, the General was given modern air brakes, a modern coupler (only on the tender, the older style coupler on the engine's front pilot remained), and was converted to burn oil. Throughout the 1960s, the engine pulled Louisville and Nashville Combine Car Number 665 as it traveled to various places across the eastern US, including the 1964 New York World's Fair under its own power.

A Battle for Custody
In the mid-1960s, the state of Georgia began to express interest in reclaiming the engine. Indeed, many proposals about the General had arisen since the 1930s, while it was still on display at Chattanooga, including plans to have the General be displayed in Underground Atlanta, Kennesaw Mountain, or at Stone Mountain Park, among others, some of which even included removing the Texas from the Cyclorama to be displayed with the engine. While much press coverage was given about these proposals, none of them had ever materialized. Even the city of Paterson, New Jersey, where the locomotive was built, expressed interest, since many engines had been built by Rogers and other firms in the city, but had none to display. Paterson eventually withdrew their proposal and sought other engines to display.

The state of Georgia's interest in the General soon raised tensions with the city of Chattanooga, where the General was displayed. In 1967, the city of Kennesaw, where the engine had been stolen in 1862, requested to have the engine attend a fundraiser held by the Big Shanty Historical Society. The General was on its way there, when it was stopped by a group led by Chattanooga's mayor, Ralph H. Kelley. He believed the engine belonged to the city, and a lawsuit had been filed against the L&N concerning custody of the engine.

On January 4, 1969, Judge Frank W. Wilson, U.S. District Judge in Chattanooga ruled that the engine belonged to the L&N, who could dispose of it as they desired. The city of Chattanooga appealed, and the case was referred to the U.S. Court of Appeals for the Sixth District. The latter upheld Wilson's ruling, and the city appealed once more, sending the case to the Supreme Court of the United States. The city of Chattanooga's appeal was dismissed by the Supreme Court, thus making Wilson's ruling final. The General was stored in Louisville during this time, only being publicly displayed over a weekend in November 1971, when it was displayed in the city's Union Station alongside the road's newer diesel engine No. 1776.

Present day
After the L&N won the legal dispute concerning the engine's custody in 1970, they brought the engine to Atlanta via Knoxville and Cartersville, bypassing Chattanooga. In February 1972, a ceremony was held in Atlanta where L&N president Kendall formally presented the General to then state governor (and later President of the United States) Jimmy Carter. Afterwards, the engine was moved to Kennesaw where a museum site was prepared. On April 12, 1972, the Big Shanty Museum (later known as the Southern Museum of Civil War and Locomotive History) opened, and the General remained on display there since.

The General, 1926 film by Buster Keaton 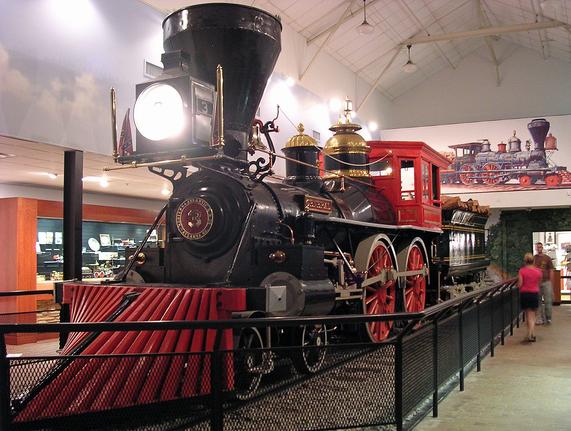 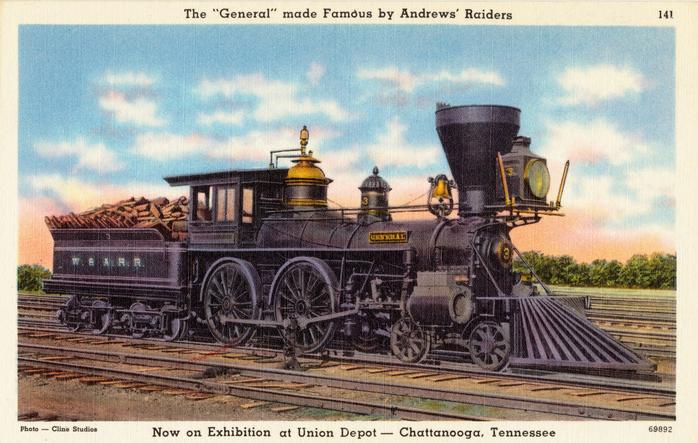 Western and Atlantic Railroad No. 3, The General, on display in Kennesaw, Georgia.

An early postcard depiction of the General.