GMD GF6C Electric Locomotive
The GF6C was an electric locomotive for freight duties built by General Motors Diesel in collaboration with ASEA of Sweden.

Seven of these locomotives were built in 1983 and 1984, for use on the BC Rail's electrified Tumbler Ridge subdivision.

Similar to EMD's GM6C testbed locomotive, the GF6C used a frame and running gear that was identical to that of EMD's popular SD40-2 diesel-electric locomotive, but had a wide cab and carbody similar to that of GMD's SD40-2F.

BC Rail chose electrification for the Tumbler Subdivision because of the long, non-ventilated tunnels, as well as steep grades and sharp curves. The line served the Quintette and Bull-Moose coal mines, and hauled coal from said mines to an interchange with CN, where diesel power took over to haul the coal to Prince Rupert where it was loaded onto deep-sea coal carrier ships.

The line did not get as much traffic as expected, though, and was thus not profitable enough to pay for the electricity required to run the seven locomotives.

The GF6C served until the catenary was removed in 2000. In 2004, the Paul D. Roy family purchased locomotive 6001 and donated it to the Prince George Railway and Forestry Museum in Prince George; the remaining six locomotives were scrapped. 6001 is currently preserved and in remarkable condition, and, according to the museum's curator and park manager, is still operable if provided with 50 kV of electricity. 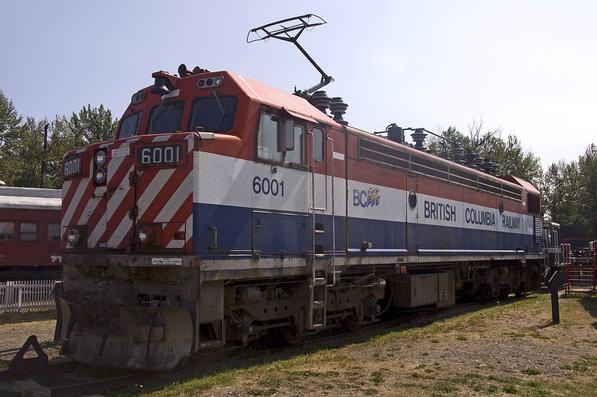 GMD GF6C locomotive No. 6001 at the Railway and Forestry Museum in Prince George, BC.