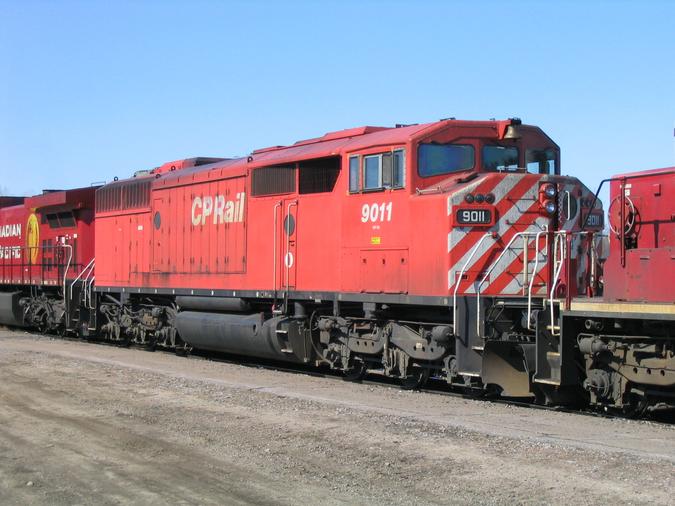 GMD SD40-2F Diesel-Electric Locomotive
The GMD SD40-2F was a 3,000 horsepower (2,200 kW) C-C diesel locomotive built by General Motors Diesel. It was fundamentally an SD40-2 in a cowl unit full-width body. A total of 25 units were built solely for the Canadian Pacific Railway. They were delivered in 1988 and 1989, after the end of production for the regular SD40-2. The engines were CP's only cowl units, and have been nicknamed "red barns" by railfans.

The locomotives are numbered 9000-9024. These were the only new locomotives to be delivered to the CPR in the "Action Red" paint scheme, a variation upon the "Multimark" paint scheme lacking the black-and-white emblem. Two engines, numbers 9000 and 9022, have been repainted in the "Dual Flags" paint scheme. They were delivered without the porthole in the nose door; this was retrofitted to most units in the early 1990s.

In mid to late 2016, CP retired all of the remaining units.

By The original uploader was Cp9020 at English Wikipedia. - Transferred from en.wikipedia to Commons by MKir 13 using CommonsHelper., CC BY-SA 2.5, https://commons.wikimedia.org/w/index.php?curid=8328729