History
General Motors Diesel, Limited, was created in 1949 as the Canadian subsidiary of the Electro Motive Division of General Motors located in the United States. Tariffs protected Canadian manufacturers against imported goods, thus many companies wanting to do business in Canada set up controlled or wholly owned subsidiaries in Canada.

Diesel-electric locomotives were built in Canada beginning in 1928 and continuing to the present. The earliest diesels were custom built one-of-a-kind designs such as Canadian National Railways numbers 9000 and 9001 and Canadian Pacific Railway number 7000. After these unique locomotives, the railways turned to more traditional designs built in the US and imported to Canada such as the Alco S-2 and EMD NW2 (both 1,000 hp) yard switchers.

General Motors Diesel selected a site on the outskirts of London, Ontario, for this plant. It opened in 1950, eventually expanding several times to 208 acres (842,000 m2) and branching out into building transit buses, earth movers (Terex 1965-1980) and military vehicles built at adjacent facilities. Originally designed to produce one unit per day, it was some time before that volume of orders were received. It was later expanded to one and one half units per day. La Grange, as the US plant was referred to, eventually could produce six units per day.

The first diesel locomotive built was Toronto, Hamilton and Buffalo Railway (TH&B) number 71, one of four model GP7 1,500 hp (1100 kW) road switchers. It was however, not the first order (C-100) received, which was from Canadian Pacific for ten model FP7A 1,500 hp (1100 kW) A units of the "covered wagon" style of carbody. The two orders were on the shop floor under construction at the same time and it was TH&B 71 which was completed first and delivered on August 25 along with 72. Pairs of A units were delivered commencing with CP numbers 4028 and 4029 on September 14 and continuing until November 11.

TH&B 71 cost $191,712 at the time. For comparison, Alco 1,000 hp (750 kW) yard switchers built in Schenectady, New York cost $115,000 including duty, while CPR G5 class 4-6-2 steam locomotives cost $88,000. The benefit of diesels over steam was largely their reduced operating costs compared to steam, but they had to be kept going to pay for themselves. Increased utilization was key to their cost benefits. Steam locomotives were inherently labor-intensive machines to operate even though less expensive to buy and operate than diesels. The greatest savings were to be had in yard service where switching often meant idle time. It was here that diesels made their first major inroads into the scene. Early road diesels were less dependable than yard engines and failure on the road away from a quick replacement engine would affect operations. Railways were not always willing to trust diesels with passenger trains that were themselves an advertisement for the railway, nor on freight trains that paid the bills.

GMD built units for export, a significant amount of business supported by government grants to foreign countries. GMD also built some experimental diesel-hydraulic locomotives and straight electric units as well, although neither were more than a tiny percentage of production.

General Motors Diesel Ltd. became the Diesel Division of General Motors of Canada Ltd. on February 1, 1969, in a consolidation of all Canadian properties.

Once dominant in North American diesel locomotive production having seen Baldwin, Fairbanks-Morse, Lima, Hamilton, Alco, MLW and CLC all fall by the wayside, General Motors fell under intense competition from General Electric (GE). GE expanded beyond its early production of small locomotives, much of it for small and medium size industries, into large mainline road locomotives for Class I railroad. EMD closed their main Chicago area locomotive plant in nearby La Grange, Illinois, in 1991, after which the London plant supplied US customers under the Free Trade agreement between Canada and the United States.

The plant was closed in 2012, after a labor dispute and construction of a new plant in Muncie, Indiana. 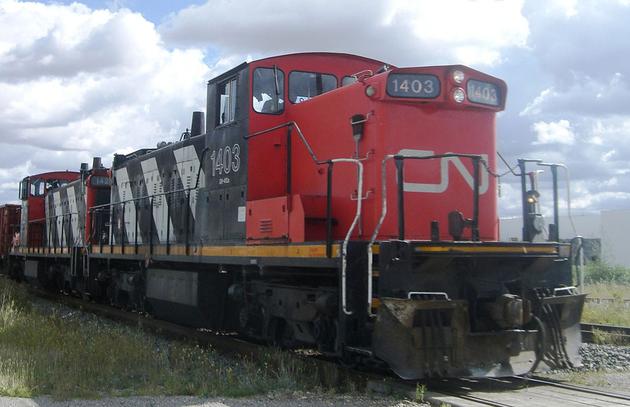