El Comedor
El Comedor (RI No. 428) is former Chicago, Rock Island and Pacific Railroad dining car, built in 1947 by Pullman-Standard to plan 7517 for the Golden Rocket, "the train that never was." It was subsequently added to the consist of the Golden State along with its brethren, and stayed with the train for many years after. The car is noted for its beautiful copper interior and Mexican theme. The hammered-copper grilles and window trim were designed by the Mexican artist Jesus Torres, of the Hull House, Chicago, Illinois.

El Comedor seats 48 people at 12 tables. For a number of years this car was parked in the LaSalle Street Station in Chicago where it was used as a stationary diner, serving patrons of the station. The car is now smooth-sided in stainless steel, and is in the collection of the Railway Museum of Greater Cincinnati in the Latonia area of Covington, Kentucky.

Comedor is a Spanish language word for diner or a railway dining car. 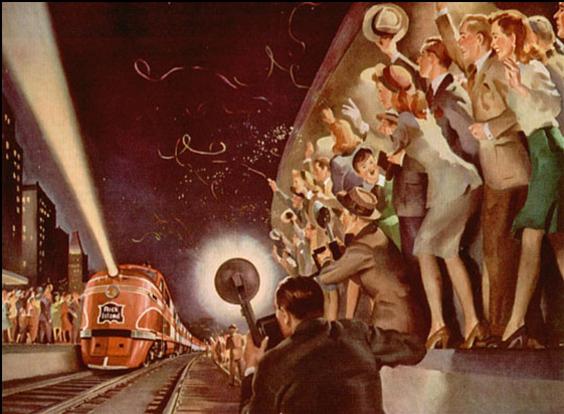 From the ad: "Most any day now, America's most beautiful new Diesel-electric train, the Golden Rocket, will begin 39 and 3/4-hour super-de luxe service between Chicago and Los Angeles over the scenic Rock Island-Southern Pacific Golden State Route."  It never happened.

In the 1940s, the Rock Island and Southern Pacific Railroads planned on jointly-introducing a high-speed, tri-weekly passenger train that would run between Chicago, Illinois and Los Angeles, California. Two 11-car consists were to have been placed into service on the new line, one owned by the CRIP and the other by the SP. However, just as Pullman-Standard neared completion on the Rock Island trainset in 1947, and in the midst of an aggressive advertising campaign, the Southern Pacific abruptly withdrew from the project. Rock Island took delivery of its rolling stock: a baggage-dormitory car, three coaches, a coffee shop-bar-lounge car, four sleeping cars, and a sleeper-lounge-observation car (with barbershop).

The units arrived bearing the ill-fated Golden Rocket's eye-popping livery, painted bright vermilion on top and bare stainless steel on the bottom. The cars also retained the festive Mexican-themed interiors originally intended for the Rocket. Rock Island immediately placed the cars into service on the Golden State, its other transcontinental train (jointly-operated with Southern Pacific).

The Golden State's cars and locomotives retained the Golden Rocket colors well into 1953, after which time the locomotives were repainted in the SP's well-known red-and-orange Daylight livery. Both railroads advertised the Golden Rocket. It was promoted as "America's Newest, Most Beautiful Streamliner"; instead, it became "the train that never was."