Union Pacific GTEL Gas Turbine-Electric Locomotive
Union Pacific operated the largest fleet of gas turbine-electric locomotives (GTEL) of any railroad in the world. The prototype, UP 50 was the first in a series built by General Electric, marketed by the Alco-GE partnership until 1953, for Union Pacific's long-haul cargo services. The prototype was introduced in 1948 and was followed by three series of production locomotives. At one point Union Pacific said the turbines hauled more than 10% of the railroad's freight.

Fuel economy was poor, the turbine consumed roughly twice as much fuel as an equally powerful diesel engine. This was initially not a problem, because Union Pacific's turbines were fueled by Bunker C heavy fuel oil. This highly viscous fuel was less expensive than diesel, but difficult to handle. When cold, its consistency is similar to tar or molasses. To solve this problem, a heater was built into the fuel tanks (and later into fuel tenders) to heat the fuel to 200 °F before being fed into the turbine. Eventually UP switched from Bunker C to modified No. 6 heavy fuel oil, which contained fewer pollutants and solvents. Soot buildup and blade erosion caused by corrosive ash plagued all of the turbines. Changes to the air intake systems on the turbine locomotives improved the air quality reaching the turbine which in turn reduced the wear to the turbine blades and increased the overall running life of the turbine. They were operated into late 1969 and the final two (numbers 18, 26) were stored at the Cheyenne roundhouse in operating condition until being retired in Feb 1970.

Prototype
Union Pacific had long sought the biggest and best locomotives. In the 1930s a pair of steam turbine locomotives were tried but rejected. Before World War II, Union Pacific had been adding diesels to its roster, but none pulled road freight trains. The idea of using four diesels to equal the power of a steam locomotive was unappealing, so the search began for something bigger. General Electric had been building gas turbines for aircraft and proposed using something similar on a locomotive. Union Pacific thought maintenance costs for a locomotive were largely independent of its power, so a smaller number of more powerful locomotives would save money.

Union Pacific decided the best way for the turbine locomotives to realize their potential would be to put them on mainline freight trains. The long runs and relatively high speeds would maximize the turbines' efficiency.

After Union Pacific expressed interest, GE built a prototype, GE 101, completed in November 1948. After tests in the Northeast during June 1949, it was renumbered UP 50. Painted in Union Pacific Armour Yellow, UP 50 began a round of tests. Union Pacific never took ownership of this locomotive, however. This was one of the few internal combustion locomotives in North America that had a cab at each end. The cabs themselves resembled the FA units being built by Alco-GE at that time. The sides of the locomotive had numerous air intake louvers that could be opened and closed in varying patterns.

UP 50 was a carbody unit with a B+B-B+B wheel arrangement – four two-axle trucks, with pairs connected by span bolsters. The turbine produced 4,800 hp, of which 4,500 hp was available for traction. This power output was more than double that of diesel-electric units of that era.

The turbines were delivered in three main groups after extensive testing of the prototype. Union Pacific intended to use the turbines to replace the famous Big Boys which were about to be retired.

By Bruce Fingerhood from Springfield, Oregon, US (up14  Uploaded by Mackensen) [CC BY 2.0 (http://creativecommons.org/licenses/by/2.0)], via Wikimedia Commons

First Generation
Between January 1952 and August 1953 UP received units 51-60, like the prototype but with a cab at only one end to increase fuel capacity. Each cost $540,000. The locomotive frame carried 7,200 gallons of fuel.

The GTELs initially pulled freights between Ogden, Utah and Green River, Wyoming, passing through Weber Canyon and Echo Canyon, Utah. In 1954 they began running Ogden-Laramie and, soon after, Ogden-Cheyenne. In 1955-56 24,000-gallon fuel tenders were added behind the turbines, allowing them to run to Council Bluffs, Iowa.

UP 53 was used to test an improved roof-mounted air intake, which proved successful, and locomotives 57-60 were built with this intake.

In May 1953 UP 57 was converted to burn propane using a pressurized tank car as a tender. This fuel burned cleanly and didn't degrade the turbine blades as Bunker C oil did but was more difficult to transport and there were safety concerns. The project ended in January 1954 and UP 57 was converted back to Bunker C. No other conversions were done.

UP 59 and 60 were used in an experimental 9,000 hp double-turbine pair, sharing a fuel tender between them. Difficulties were encountered due to the trailing turbine flaming out in tunnels. Despite modifications to minimize these difficulties, the experiment was discontinued, in favor of running additional diesel locomotives with the turbines.

The first generation turbines were retired by June 1964.

Second Generation
Units 61 to 75 were delivered beginning in 1954. The outside walkways along their flanks earned them the nickname "verandas" and made them hybrids of carbody and hood locomotives. The turbine and electrical equipment were about the same, though the side louver air intakes were replaced by the large roof mounted intake first tested on UP 53.

UP 61 was used in multiple-unit train control (MU) tests with diesels starting in 1958. These tests were successful and eventually all but six of the 4,500 hp GTELs were equipped to run with diesels. As tonnage requirements increased, trailing diesel locomotives in multiple unit operation became more commonplace.

The verandas were retired between August 1963 and June 1964.

Third Generation
In 1955, Union Pacific ordered a new turbine-electric, the world's most powerful locomotive. Each would be two units plus a fuel tender, rated at 8,500 horsepower.

The A unit contained the control cab and an auxiliary diesel engine generator. The B unit carried the turbine and main generators to provide electricity to the traction motors on both the A and B units. The turbine was a new design GE Frame 5 simple cycle gas turbine with a sixteen-stage compressor, ten combustion chambers and a two-stage turbine. No steam generator was needed to heat the heavy Bunker C fuel because the tenders were insulated. The original plan was to number these units in the 7000 series but they were numbered 1 to 30.

They were delivered to Union Pacific between August 1958 and June 1961. These units were very different from the previous generations, having a wheel arrangement of C-C on each of their units (not including their tenders). The locomotive weighed about 610 tons with a full tender. Continuous tractive effort was 146,000 lb with the 65 miles per hour 74:18 gearing; in 1961 tonnage ratings were 6740 on the 0.82% climb west from Cheyenne and 5180 on the 1.14% east from Ogden.

With 8,500 hp from a single prime mover these engines set a record that still stands. That rating was claimed to be at 6,000-foot altitude and 90 °F, and in cooler, denser air the turbine itself could exceed 10,000 hp if the electrical system could handle it. Trains says "The big 8500 h.p. jobs remain under constant scrutiny as UP: (1) jacks some of them up to 10,000 h.p. ratings; (2) considers motorizing their fuel tenders with traction motors..." UP tried resetting generator excitation to absorb the higher rating but only on test. A motorized tender sounds unlikely, though Trains mentions that the turbines' four-month trial to Los Angeles in 1962 ended when "tender wheels were motorized, imposing speed restriction." (The 1961 and 1963 timetables show a 65 mph limit for all the turbines).

These turbines eventually displaced units 51 to 75. There had been problems with fuel filters clogging on the earlier turbines, so it was decided to filter the fuel before filling the locomotive fuel tanks and the tender.

Unlike the earlier turbines, the 8,500 hp turbines came with 24,000 gallon fuel tenders, in addition to the 2,500 gallons of diesel fuel in the locomotive tank. They had Leslie S-5T-RF air horns on the cab roof (later moved to the mid radiator section of the A unit, in response to ice build-up in the bells).

The turbines in these units are the most powerful prime movers ever installed in any North American locomotives.

Retirement
Bunker C's cost advantage waned as the plastics industry began to find uses for it and improved cracking techniques allowed the oil, previously considered waste, to be converted to lighter fuel grades.

The last run of a gas turbine locomotive took place on December 26, 1969. All engines were out of service by 1970. Their running gear was recycled into the GE U50 series of locomotives. Trucks, traction motors and span bolsters from locomotives 51 to 75 were used in the construction of the U50, and trucks and traction motors from locomotives in the 1 to 30 series were used in the construction of the U50C. Several of the tenders were retained and converted to hold water for maintenance of way purposes and later to be used for Union Pacific's operating steam locomotives, UP 844, UP 3985 and UP 4014.

Two of the turbines survive - UP 26 at the Utah State Railroad Museum in Ogden, Utah, and UP 18 at the Illinois Railway Museum. UP 18's tender UP 907853, built in 1937, had a long history; first built for use with UP's FEF series steam locomotives before conversion to turbine use, it served as a water tender from the 1970s to 1984 for trains such as the Expo '74 and the American Freedom Train before being donated to the Kansas Railroad Museum, and then acquired by the IRM. Neither UP18 nor UP26 are reported to be in operable condition.

Experimental Coal Burning Turbine
In October 1962, Union Pacific constructed an experimental GTEL of their own, using a modified ALCO PA-1 as a cab, the chassis of a GN W-1 class electric locomotive (bought for scrap from the Great Northern Railway) as the second unit, and a modified turbine prime mover removed from one of the 50 to 75 series locomotives.

The consist had an A1A-A1A+2-D+D-2, wheel arrangement, 18 axles of which 12 were powered. The PA-1's 2,000 hp diesel engine was retained and the B unit carried the main power plant for the main generators, which contributed 5,000 hp for a total power output of 7,000 hp. The coal tender was rebuilt from that of Challenger steam locomotive number 3990. The setup was numbered 80, but changed to 8080 in 1965 to avoid conflict with the new EMD DD35s then being introduced.

The blade erosion and soot build-up problems encountered in the earlier locomotives were magnified with the coal turbine. Grinding coal into fine particles was also troublesome but necessary because any oversized coal particles could damage the turbine blades. Ultimately, the experiment was declared a failure and was scrapped after spending only 20 months in service.

The conventional gas turbines each racked up well over 1,000,000 miles in revenue service but the coal turbine prototype ran less than 10,000 miles before being struck from the UP roster on March 15, 1968. The PA-1 control unit was traded to EMD, while the turbine unit and tender were scrapped at the Omaha shops. 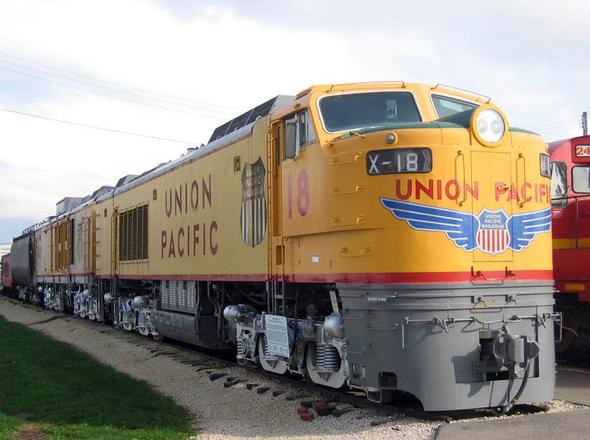 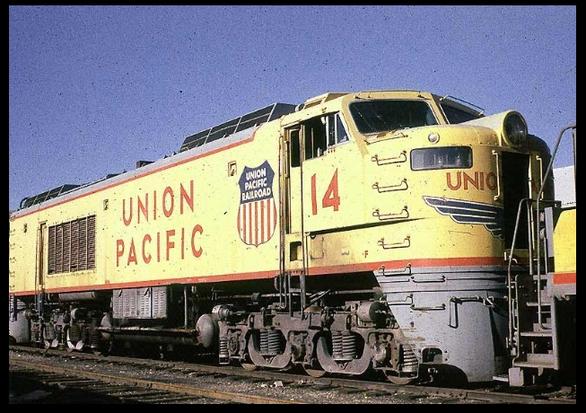