Heisler Locomotive
The Heisler locomotive was the last variant of the three major types of geared steam locomotives. Charles L. Heisler received a patent for the design in 1892, following the construction of a prototype in 1891. Somewhat similar to a Climax locomotive, Heisler's design featured two cylinders canted inwards at a 45-degree angle to form a 'V-twin' arrangement. Power then went to a longitudinal drive shaft in the center of the frame that drove the outboard axle on each powered truck through bevel gears in an enclosed gearcase riding on the axle between the truck frames. The inboard axle on each truck was then driven from the outboard one by external side (connecting) rods.

In 1897, Heisler received a patent on a three-truck locomotive. As with Class C Shay locomotives, the tender rode on the third truck. Unlike the Shay, Heisler's design did not have a continuous string of line shafting running the length of the engine. Instead, the tender truck was driven by a line shaft above the shaft driving the main engine trucks, connected to it through spur gears. This patent also covered use of a 4-cylinder 'vee four' cylinder configuration.

The Heisler was the fastest of the geared steam locomotive designs, and yet was still claimed by its manufacturer to have the same low-speed hauling ability.

A & G Price of Thames, New Zealand received an order for a Heisler locomotive in 1943 from Ogilvie and Co, a sawmill in Hokitika, who wanted to purchase a Heisler locomotive but were unable to do so as production of Heisler locomotives had ceased in 1941. The resulting locomotive, maker's NO 148 of 1944, was the last Heisler-design steam locomotive to be built, and closely followed Heisler practice but with the addition of a Belpaire firebox and front-mounted water tanks that featured a unique curved leading edge.

Notable survivors
Roughly 625 Heislers were produced, of which some 35 still exist. Approximately eight of these survivors are currently operational.

Clark's Trading Post in Lincoln, New Hampshire, operates the White Mountain Central RR No. 4 (s/n 1594).
Roaring Camp Railroads in Felton, California, operates the Roaring Camp & Big Trees Narrow Gauge RR No. 2 (s/n 1401).
The Sumpter Valley Railway in Baker County, Oregon, operates the former W. H. Eccles Lumber Co. No. 3 (s/n 1306) on a regular basis.
A 75-ton 1918 Heisler locomotive is on static display at the Travel Town open-air museum in Los Angeles.
The Southeastern Railway Museum in Duluth, Georgia, has a two-truck Heisler (No. 9) lovingly restored on static display inside the main exhibit hall. The Heisler is painted for the Campbell Limestone Co and is in excellent condition.
In operation in Willits, California, at the Roots of Motive Power is a 47-ton 2-truck Heisler, former Bluestone Mining & Smelting No. 1. Built in 1916.
Ex-Curtiss Lumber Company loco number 2 operates on the Oregon Coast Scenic Railroad during the tourist season.
The 3-truck, 90-ton West Fork Logging Co No. 91 operates on the Mount Rainier Scenic Railroad in Elbe, Washington, who also have a 78-ton 3 truck on static display.
Cass Scenic Railroad State Park in Cass, West Virginia, operates a 90-ton, 3-truck Heisler built in 1929.
Another Heisler two-truck locomotive can be found on static display next to the headquarters building of the former Pacific Lumber Co. in Scotia, California.
Heisler serial number 1260 built in 1912 (2-truck) is currently running on the Silver Creek and Stephenson historical railroad in Freeport, Illinois.
A & G Price 148 (the last Heisler design locomotive), built in 1943 survives at Steam Scene, Christchurch, New Zealand, in full working order. Its boiler ticket will expire in 2022.
Heisler 1082 is preserved at the Bush Tramway Club at Pukemiro, New Zealand, where it is on static display.
Heisler 1450 is preserved at Ferrymead Railway, Christchurch, New Zealand, and is stored in the locomotive shed.
Heisler 1494 is preserved at Shantytown, near Greymouth, New Zealand. It was statically restored in 2011 for display within the park's environs.
Heisler 1502 is at Locomotive Park in Lewiston, Idaho, in an unrestored state on static display. It is a 90-ton, three-truck built in 1924.

The Heisler locomotive's gearing was inside the frame and thus protected, unlike that of a Shay locomotive. However, the Heisler's drive shaft, which was located in the center of the frame, limited firebox space. For this reason, when A & G Price built their Heisler, in 1943, they used a Belpaire firebox, to mitigate problems with burning wood and accommodating the drive shaft. 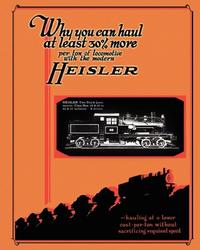 Steam locomotive No. 3 hauls a train pulling into the Sumpter Valley Railroad station in Sumpter, Oregon. 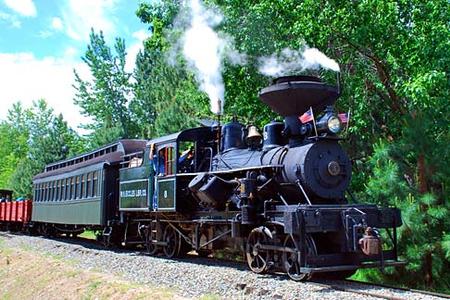 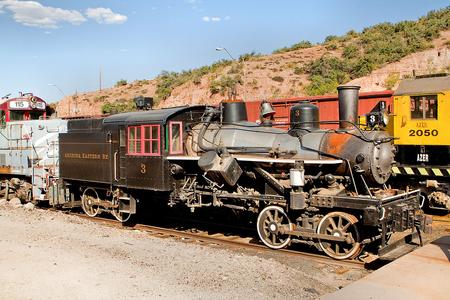 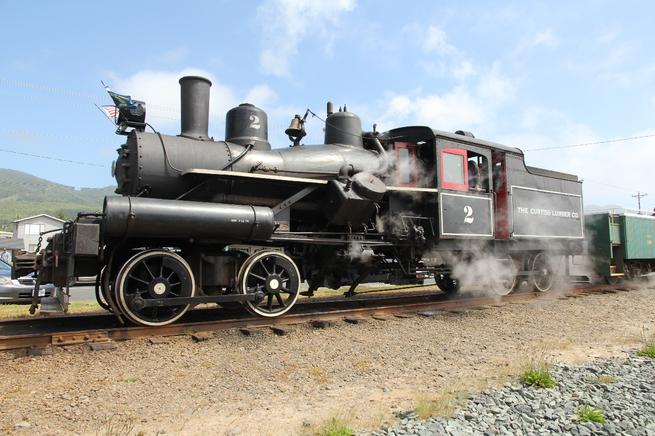