History
In 1946 Lima's Class 1 market prospects were bleak unless it could enter the diesel-electric locomotive field quickly, but they couldn’t afford a full-scale development program. Lima was viewed as an attractive potential partner by other firms eager to enter the market. One proposal was from Fairbanks-Morse, since the five-year contract with General Electric to build road locomotives for Fairbanks-Morse would run out in 1949, and GE had no interest in renewing the contract since they were working with the American Locomotive Company (ALCO), and already had designs of their own for the road diesel market. Although all the details of the Fairbanks-Morse proposal are not known, it appears to have offered little more than a contract to assemble locomotives and that Fairbanks-Morse wanted a manufacturing facility, not a partner.

The General Machinery Corporation management wanted to terminate steam locomotive production, while the Lima management was still committed to the development of a 4-8-6 super steam locomotive, nicknamed "double-bubble" for its unique firebox, designed with poppet valves, to be a true competitor in the diesel market, the design of which began in 1929. By April 1949, the design was shelved, and Lima finished its final steam locomotives a month later. Chief Mechanical Officer Bert Townsend resigned in protest of the decision to scrap the plans to build steam locomotives.

The LS-1000's similarity to the ALCO 1000 hp switcher may be more than a coincidence. Former ALCO engineer F. J. Geittman was hired by General Machinery Corporation prior to the merger with Lima to oversee their diesel locomotive project. His job was to develop a new prime mover, as the current Hamilton diesel engine was not suited for locomotive applications.

Hamilton engineers proved to be worthy counterparts to their Lima brethren. They realized from the start that high power-to-weight ratios yield no advantages for locomotives, since locomotives are traditionally weighted with ballast to obtain optimal adhesion. This allowed them to incorporate heavier crankshafts, bearings, connecting rods and other parts. Whereas the competition was experiencing road failures with their engines because they followed traditional design methods and used lightweight components. 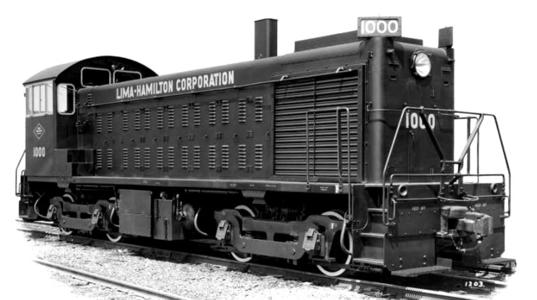