The New York Central M-497. This jet-enhanced train car was tested (successfully) in the summer of 1966. This was the time when rail-road usage declined in America, as the interstate highway system completed its major routes and airlines drew increasing numbers of travelers. New York Central research team, led by Don Wetzel, was assigned a task to collect data on possible high-speed rail service and whether the tracks could handle high-speed passenger traffic. By Source (WP:NFCC#4), Fair use, https://en.wikipedia.org/w/index.php?curid=55617577

M-497 Black Beetle
The M-497 (nicknamed Black Beetle by the press) was an experimental jet-powered locomotive test bed of the New York Central Railroad (NYC) corporation, developed and tested in 1966 in the United States. Two second-hand General Electric J47-19 jet engines (designed as boosters for the Convair B-36 Peacemakerintercontinental bomber) were mounted atop an existing Budd Rail Diesel Car (an RDC-3, part coach, part baggage and mail configuration) body which had received a streamlined front cowling. The construct was then successfully sent on test runs over the existing tracks between Butler, Indiana, and Stryker, Ohio. (The line was chosen for its arrow-straight layout and good condition, but otherwise unmodified track.) On July 23, 1966, the car reached a speed of 183.68 mph (295.60 km/h), an American rail speed record that still stands today.

Even with this spectacular performance (and even though it had been built relatively cheaply, using existing parts), the project was not considered viable commercially. The railroad gathered valuable test data regarding the stresses of high-speed rail travel on conventional equipment and tracks then existing in America. The data was largely ignored, as the NYC was headed for merger with its arch rival Pennsylvania Railroad. The PRR was already heavily involved in the Metroliner project, funded by the United States Department of Transportation.

M-497 continued to serve for Penn Central after the jet engines were removed until it was retired by Conrail in 1977. Engines were re-used as X29493, an experimental snow blower. Like most similar jet engine blowers, it was effective at clearing snow and ice but also tended to dislodge the ballast. 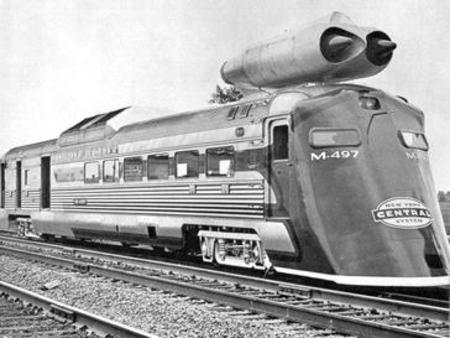