Mallet Locomotive
The Mallet locomotive is a type of articulated steam railway locomotive, invented by the Swiss engineer Anatole Mallet (1837–1919).

The essence of his idea combines articulation of the locomotive and compound steam use. The articulation was achieved by supporting the front of the locomotive on a truck frame (called a Bissell truck); the compound steam system fed steam at boiler pressure to high-pressure cylinders for the main driving wheels. As the steam was exhausted from those cylinders, it was passed into a low-pressure receiver and was then sent to low-pressure cylinders to power the driving wheels on the Bissell truck.

A third stage (triple expansion) may be employed. Compounding was proposed by the British engineer Jonathan Hornblower in 1781.

The American engineer W. S. Hudson patented a system of compounding for railway locomotives in 1873 in which he proposed an intermediate receiver surrounded by hot gas from the fire, so that the low-pressure steam is partly superheated.

Mallet patented such a system in 1874, and in 1876 the first locomotive on his principle was built: an 0-4-2T for the Bayonne and Biarritz Railway, and several others followed for railways in mainland Europe.

The London and North Western Railway locomotive engineer F W Webb adopted the idea and converted some existing locomotives in 1879, followed by de Glehn and others in the 1880s and several American engineers in the 1890s which included some vertical boiler railcar applications.

Articulation
Mallet found typical main line railways unwilling to adopt his particular ideas and, in 1884, he started to propose compounding combined with articulation; on lightly engineered secondary lines this could give greater power to locomotives whose axle load and size was limited. His patent 162876 in France specified four cylinders, two large and two small, with one pair of cylinders acting on two or three fixed axles, and the other pair acting on axles mounted in a swiveling truck.

Diagrams provided by Mallet make it clear that the swiveling truck was to be a Bissell truck, that is, a pony truck or bogie pivoting about a vertical pin some distance behind the center of the truck itself. The weight of the front part of the locomotive frame was to be supported on an arc-shaped radial bearing. The truck could therefore turn into a curve and move to some extent laterally.

The Mallet concept
This then was what became understood as a "Mallet" locomotive: an articulated locomotive in which the rear set of driving wheels were fixed in the main frame of the locomotive; a Bissell truck carrying a second set of driving carrying wheels; and compounding in which the high-pressure cylinders drove the axles on the main frame and the Bissell truck axles were driven by low-pressure steam.

Mallet asserted that the advantages of his concept were:
all the locomotive weight would be adhesive, yet there would be great flexibility of the locomotive as a vehicle;
the difficulties with Meyer, Fairlie and other then-existing articulated systems would be eliminated as the moving pipes would be carrying steam at only 40 to 55 psi (280 to 380 kPa) pressure, and would be easier to keep steam-tight; and
A simple type of very powerful locomotive would be created.

Independent cut-offs for the high-pressure and low-pressure cylinders were advocated by Mallet, but driving standards were inadequate and he later used combined cut-off control.

European versions
Large numbers of Mallet designs for narrow gauge railways were built, but in 1889 the first six standard gauge examples were built by J A Maffei for the Swiss Central railways, and an 87 tonne 0-6-6-0T banker (US: pusher) for the Gotthard Bahn, the last being the most powerful and heaviest locomotive in the world at the time. By 1892 110 Mallets were at work, of which 24 were standard gauge; by 1900 there were nearly 400, of which 218 were on standard gauge or Russian gauge of 1,520 mm or 4 ft 11 27⁄32 in.

The biggest and heaviest examples built for European railways were the 0-8-8-0Ts built by Maffei for Bavarian State Railways between 1913 and 1923. However no Mallet ever ran on a British railway.

US usage
B&O No. 2400, the first American Mallet
The first American example was an Alco locomotive called Old Maude that was built for the Baltimore & Ohio Railroad in 1903; it was an 0-6-6-0 weighing 334,500 lb (151,700 kg) and with axle loads of 60,000 lb (27,000 kg). Received negatively at first due to speed limitation arising from the short wheelbase and stiff suspension, it gained support during service, and it was soon followed by Baldwin examples, and then steadily heavier and more powerful successors.

As weight and power and length increased, there were experiments with flexible boiler casings; from 1910 the Santa Fe road introduced 2-6-6-2 locomotives weighing 392,000 lb (178,000 kg), with a 37 feet (11.28 m) long boiler barrel, with a firetube reheater and a firetube feedwater section in front, each separated by a blank section, and variants of a telescopic or bellows type boiler casing. These were unsuccessful, and later engines used conventional boilers.

Simple expansion versions in the US
By about 1920 the US version of the Mallet as a huge slow-speed pusher had reached a plateau; the size of the LP cylinders became a limiting factor even on the large loading gauge permitted in the US, and reciprocating masses posed serious dynamic problems above walking pace. Moreover, there were adhesion stability problems where the front engine tended to slip and then stall uncontrollably because of an imbalance of tractive effort and axle load, accentuated by the drawbar reaction, and inability of the intermediate steam receiver to accommodate the sudden pressure change. This was further worsened by dynamic instability of the front end in running.

The Chesapeake & Ohio road introduced 25 simple (non-compound expansion) 2-8-8-2 locomotives in 1924 and 20 more in 1926. Although the simple-expansion concept diverged from Mallet's original patent, the locomotives were clearly a continuation of the concept and were conveniently still referred to as "Mallet" locomotives. As the front truck cylinders were now using boiler pressure steam, special arrangements were necessary to deliver it, through the truck pivot pin where only radial movement took place. These new locomotives took over service on a 113-mile (182 km) division, covering it in 5 hours with 9,500 tons (8,600 t; 8,500 long tons) and a single locomotive.

The last Mallets
These American locomotives were paralleled to some extent by heavy haul versions in the USSR, though without any attempt at faster running. Two 2-8-8-4 examples built in Russia in 1954-55 were probably the last Mallets built in Europe.

Other continents
Although it had found early favor in Europe, especially on lightly engineered railways, the Mallet type had generally been superseded by the Garratt locomotive by the mid-1920s, but in the Dutch East Indies, now the Republic of Indonesia, several types and sizes remained in use into the 1980s. Moreover, in 1962 the Indonesian State railways DKA ordered a series of 0-4-4-2's, basically an updated version of the earlier Dutch design, for the old Atjeh (now Aceh) tramway. Constructed by Nippon Sharyo in Japan, these are the only Mallets built in Asia. In contrast to the rest of the Indonesian railways it has a gauge of 750 mm (2 ft 5 1⁄2 in), as to 1,067 mm (3 ft 6 in) for the rest of the Archipelago. Smaller Mallets were used by plantations and other industries, all of the 0-4-4-0 type. These ran mostly on 600 mm (1 ft 11 5⁄8 in) and 700 mm (2 ft 3 9⁄16 in) gauge networks.

One Mallet ran in New Zealand, and is preserved at Glenbrook Vintage Railway, Auckland. Three Mallets ran in Australia.

Preservation
Several Mallets have been preserved, some even in operational condition. A number of the Union Pacific "Big Boys" have escaped the scrapper, including one overlooking the US city of Omaha, Nebraska where UP is based. In January 2014, Big Boy No. 4014 was removed from its museum ground parking track in Pomona, California and hauled to Cheyenne, WY for restoration to operating condition. Stationed out of the Cheyenne, Wyoming yard, Union Pacific 4-6-6-4 No. 3985 is currently the largest operating steam engine in the world. The Western Maryland Scenic Railroad reached an agreement with the Baltimore and Ohio Railroad Museum for Chesapeake & Ohio 2-6-6-2 No. 1309 to be restored to operation by May 2016. No. 1309 was the last domestic steam locomotive to be built by the Baldwin Locomotive Works. The locomotive was partially disassembled and loaded onto heavy flatcars on July 10, 2014 in Baltimore. The load will travel via CSX to Cumberland where restoration will take place. When completed, No. 1309 will become the largest operable Mallet on the East Coast. Two smaller Mallets, originally intended for the steep grades and sharp curves of logging railroads have been restored to operating condition. Black Hills Central No. 110 (former Weyerhauser) operating out of Hill City, South Dakota and Clover Valley No. 4 out of Sunol, California. One of the early Dutch-built Indonesian Mallets has been returned to the Netherlands and is now exhibited in the Dutch Railway Museum, while another industrial type has been purchased and restored by the Statfold Barn Railway in the UK. This saw its first operation in Europe in 2011 and after initial trials on the owners' railway, was transferred to the Welsh Highland Railway as its power is better suited to that railway. A number of Mallets were constructed for the Nordhausen Wernigerode Eisenbahn (now part of the Harz Narrow Gauge Railways system in Germany) and some of these remain in working order (running numbers 99 5901-3 and a later version, constructed by the Deutsche Reichsbahn Gesellschaft, no. 99 5906).

Terminology
As a French speaking Swiss, Mallet pronounced his name accordingly, something like "Mallay".

Mallet's original patent specifies compound expansion, but after his death in 1919 many locomotives (particularly in the United States) were articulated Mallet style without using compounding (for instance the Union Pacific Big Boy). When fleets of such locomotives appeared in the middle 1920s the trade press naturally called them "Simple Mallets" — i.e., simple locomotives articulated like Mallets — but eventually the notion spread that this was somehow incorrect. The term "Mallet" continued to be widely used for simples as well as compounds, but some enthusiasts insist "simple Mallet" is an oxymoron. 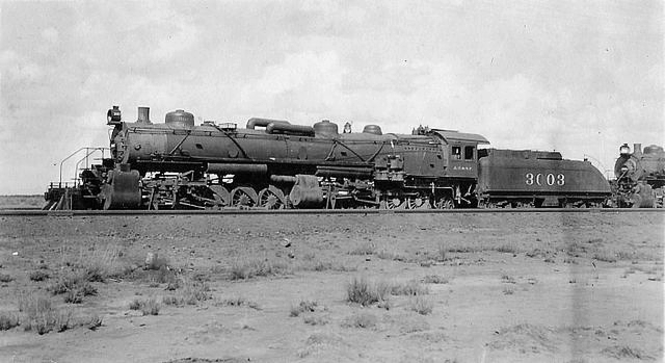