The Milwaukee Road Class F7 Streamlined Steam Locomotive
The Milwaukee Road's class F7 comprised six (No. 100 – No. 105) high-speed, streamlined 4-6-4 "Baltic" or "Hudson" type steam locomotives built by Alco in 1937–38 to haul the Milwaukee's Hiawatha express passenger trains. Following on from the success of the road's class A 4-4-2's, the F7's allowed the road to haul heavier trains on the popular Chicago–Twin Cities routes.

The F7s are major contenders for the fastest steam locomotives ever built, as they ran at over 100 miles per hour daily. One run in January 1941 recorded by a reporter for Trains magazine saw 110 miles per hour achieved twice—in the midst of a heavy snowstorm. Baron Gérard Vuillet, a French railroading expert, once recorded a run between Chicago and Milwaukee where the locomotive reached 125 mph and sustained an average 120 mph for 4.5 miles. However, the British locomotive LNER Class A4 4468 Mallard is officially accepted to be the world's fastest, with a run recorded at 125.88 mph in 1938.

The Milwaukee F7's are accepted as the fastest steam locomotives by a different measure—scheduled speed between stations. In 1939, shortly after they were introduced into passenger service, the Twin Cities Hiawatha schedule was modified such that the engines would need to run the 78.3 mi between Portage and Sparta, Wisconsin in 58 minutes—a start-to-stop average of 81 mph. 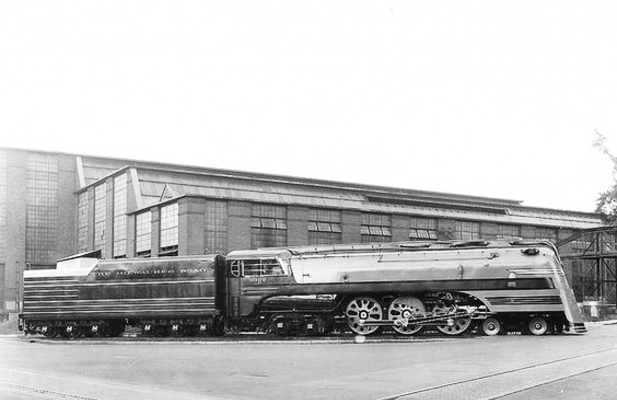