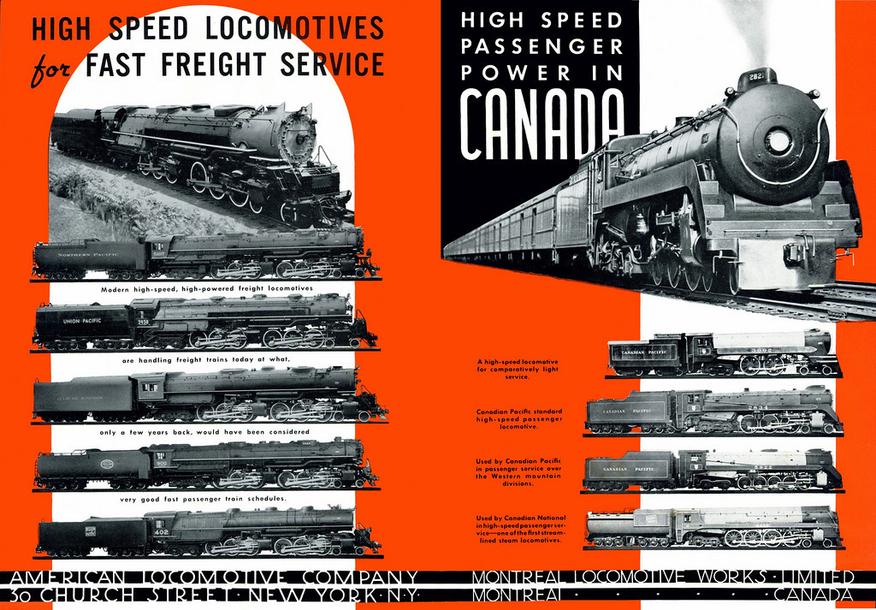 A Montreal Locomotive Works advertisement, circa 1940.

Early history
The Locomotive and Machine Company of Montreal Limited was created in 1883, producing primarily for the growing domestic market—notably the Canadian Pacific Railway, the Grand Trunk Railway, the Intercolonial Railway and, after 1922, the Canadian National Railway.

Purchase by Alco
In 1901, the American Locomotive Company (Alco) headquartered in Schenectady, New York, was formed by the merger of several struggling locomotive manufacturers. Alco purchased the Locomotive & Machine Company of Montreal in 1904 to tap into the Canadian market with its emerging designs. The Montreal subsidiary was renamed Montreal Locomotive Works (MLW) several years later.

MLW became an exclusive Alco design shop and acquired a substantial portion of the Canadian steam locomotive market. The period of railway expansion between 1900 and 1915 was unprecedented in Canada, with many new orders for locomotives from various domestic manufacturers. Protective customs tariffs also discouraged Canadian railways from purchasing American-built locomotives for use in Canada. Several bankrupt private systems, including the Grand Trunk and Canadian Northern, were nationalized in the years 1918–22. Merged with the federally owned Intercolonial, they formed the federal Crown corporation Canadian National Railways. The federal government mandated that the new, larger public company purchase locomotives from all Canadian manufacturers to discourage domination of the market by any one manufacturer.

Between 1918 and the period after World War II, Canadian National modernized its steam locomotive fleet by replacing many of the units it received from its constituent railways. MLW was a major beneficiary of these purchases, along with the Canadian Locomotive Company of Kingston, Ontario. MLW grew substantially during the Second World War when its plant facilities were converted primarily to fabricating matériel for the Commonwealth/Allied war effort (largely by a female workforce), including the Ram tank and the Sexton self-propelled gun.

Post-war diesel competition
Following World War II, MLW and other locomotive builders reverted to building locomotives. MLW continued to benefit from Canada's restrictive trade policies which prevented a flood of U.S. imports. However, the switch from steam to diesel-electric locomotive production opened the door to new competitors. In 1949, the Electro-Motive Division of General Motors established a Canadian subsidiary named General Motors Diesel Division (GMDD) in London, Ontario. MLW's long-established steam locomotive competitor, the Canadian Locomotive Company (CLC), had also entered into a partnership with Baldwin and imported and produced the designs of Baldwin and its subsidiary Whitcomb. Westinghouse was the main supplier of Baldwin's electrical transmission components. After Baldwin folded, CLC became a licensee of Fairbanks-Morse and manufactured a number of F-M designs for the Canadian market, including the famous Train Master. CLC was also responsible for building General Electric industrial switchers. General Electric did not enter the road diesel-electric market in the United States until the late 1950s, a move it took after dissolving its partnership with Alco in 1953.

Mass transit
In 1960, MLW was awarded the contract to build 36 new subway cars for the Toronto Transit Commission. The M1 Series Subway Cars were notable for being the first ever rapid transit vehicles to be designed and built in Canada. They were also an improvement over the previous rolling stock, being lighter and faster, despite also being considerably larger. MLW's venture into rapid transit would be short lived, as the Toronto Transit Commission opted for Hawker Siddeley Canada vehicles from the mid-1960s on.

Diesel-electric production
In 1949, MLW began to introduce its first Alco-GE-derived diesel designs in response to GMD, mostly switchers, some of which were given different names and slight modifications to distinguish between MLW and ALCO-GE versions. In 1951, MLW began to build Alco-GE cab-units for freight and passenger service.

Canadian railways continued to rely heavily upon steam locomotives throughout the 1950s, a time when many United States. railroads were converting to diesels. Nevertheless, as in Canada, some Class 1 American railroads continued to use modern steam power through 1959, including the Norfolk & Western Railway and the Union Pacific Railroad. However, with some isolated exceptions, and as in the United States, Canadian railways were completely dieselized by 1960.

Like GMD in London, Ontario, MLW benefited from Canadian trade policies which were less restrictive than the those of the United States in regard to dealing with countries throughout the decolonizing and developing world, permitting MLW to expand a growing export business.

MLW-Worthington
MLW's parent, Alco, experienced several years of declining business during the 1960s following the entry of former-partner General Electric into the road switcher manufacturing business in the United States. This was due, in part, to continuing reliance on GE's high quality electrical transmissions, sold to Alco and MLW at a disadvantageous price by GE. Placed in a similar situation when Westinghouse left the railway rotating equipment market in 1953, Fairbanks-Morse developed its own line of rotating equipment, although this did not save F-M's railway business. GMD's transmissions were built to parent GM-EMD's designs, in turn closely based on earlier GE equipment (prior to 1937). Alco found itself in financial difficulty in 1964 and was purchased by Worthington Corporation, a major manufacturer of equipment for the pulp and paper industry and a former builder of steam locomotive accessories. At that time MLW was renamed MLW-Worthington and continued much as before.

In 1967, Worthington Corporation merged with the Studebaker Corporation, recently exited from the auto business, to form Studebaker Worthington Inc., with ALCO as a wholly owned subsidiary. In 1968, several divisions of Alco became semi-independent subsidiaries, and in a 1969 corporate reorganization, Studebaker Worthington closed the Schenectady locomotive manufacturing facility. The locomotive designs were transferred in 1969 to MLW-Worthington and the diesel engine designs were sold in 1970 to White Motor Corporation. The Alco diesel engine designs went through several changes in ownership as White Motor Corporation formed White Industrial Power which was subsequently purchased by the British General Electric Company in 1977. Renamed Alco Power Incorporated by GEC, the designs were, ironically, sold to Fairbanks-Morse in 1994.

In this period, MLW-Worthington partnered with Pratt & Whitney Canada to construct the Turbo Train fleet for Canadian National. It also continued engineering development of the ALCO 251 series engine, producing the M640 4000 hp 18-cylinder prototype for Canadian Pacific in 1972. However, by this time CP had settled on the EMD 645 series SD40 and SD40-2 as their standard locomotive, and there were no further orders forthcoming from that company.

Throughout the early 1970s MLW-Worthington continued to build second generation designs for Canadian railways. The Canadian Locomotive Company (renamed as Fairbanks-Morse, Canada) had closed in 1969, leaving MLW-Worthington as the primary competitor to the rapidly expanding GMD. During this time, at the behest of Canadian National, MLW-Worthington developed the wide-nosed "safety cab", which provided improved crew accommodation and collision protection. First appearing on the M-420 and concurrently on the EMD GP38-2, the safety cab became common on Canadian National and the British Columbia Railway. Canadian Pacific, however, never purchased any such units from MLW. This form of cab design has now become a North American industry standard. Although earlier wide-nosed cab designs on models such as the EMD FP45 and DDA40X bear a superficial resemblance, they lack the advances in collision protection and accommodations of the "safety cab" design.

Purchase by Bombardier
In 1975, the emerging Quebec based Bombardier purchased a 59% stake in MLW from Studebaker-Worthington. Under Bombardier, the MLW organization continued to provide innovative locomotive design into the early 1980s, and also benefited from its geographic location. During the 1970s, Bombardier began to enter the railway passenger car business with domestic orders for commuter and subway systems. Based on a prototype trainset constructed in the mid-1970s, in 1980 MLW began production of a fleet of high-speed diesel-powered passenger locomotives for the LRC (Light, Rapid, Comfortable) passenger trains being built for the newly created federal Crown corporation Via Rail. Similar equipment was also used briefly by Amtrak.The last of the locomotives were retired from service in 2005, although the pendular-suspension coaches continue to form the backbone of Via's intercity corridor fleet.

By now fully merged into Bombardier, the MLW plant and design bureau also received a spurt of contracts from government-owned Canadian National Railway for the newly designed HR (High Reliability) line of freight locomotives which incorporated the Canadian safety cab or a full-width carbody; namely the 4-axle HR-412 (similar to the M-420) and the full-width carbody 6-axle HR-616.

The HR-616 incorporated another unique design with the "Draper Taper", named for the designer at CN, allowing for rear visibility from the cab. These locomotive designs were intended to replace aging MLW and GMD units CN had purchased during the late 1960s and early 1970s, although only a token combined order of 30 units were built. These locomotives were considered a failure as they lasted only as long as the units which they were designed to replace (mid-1990s) and were considered to be mechanically and electrically unreliable, a common complaint with several ALCO/MLW designs.

In a 1985 corporate reorganization, Bombardier removed itself from manufacturing locomotives and concentrated on producing passenger train rolling stock, as well as aircraft (following the 1986 acquisition of the federal government Crown corporation Canadair), in addition to its recreational products.

The dormant MLW plant was sold to General Electric in 1988 and ironically was used by GE during a late 1980s program of rebuilding some of its earlier "Universal series" road switchers - the locomotives which had initially driven ALCO out of the locomotive business in the United States in 1969.

In 2004, the rest of the enormous complex was demolished. The nearby GE-Camco-Westinghouse plant, which is the only Canadian manufacturer of home appliances, bought half of the property to build its new shipping warehouse and a new parts store. Most of the vacant lot and pile of rubble from the former MLW plant can still be seen at the corner of Dickson Street and Souligny Avenue.

Notable locomotives built by MLW
MLW built several of Canada's most famous locomotives. Most notably, Canadian Pacific 2800 series 4-6-4 Hudson class of locomotives. The 2800s became famous after CPR 2850 pulled the royal train across Canada. Since then, later 2800s (numbered 2820–2864) are known as Royal Hudsons, with royal permission granted from the king.

From 1968 to 1982 Via Rail operated a gas turbine powered passenger service between Toronto and Montreal. The locomotives were built by Montreal Locomotive Works.