Norfolk and Western Railway's J class steam locomotives were a class of 4-8-4 locomotives built by the Norfolk and Western Railway's East End Shops in Roanoke, Virginia between 1941 and 1950. The first batch, numbered 600 to 604, were built in 1941–42 and were delivered streamlined. In 1943, 605–610 were delivered without shrouding and lightweight side rods, due to the limitations on the use of certain materials during the war; due to these distinctions, they were classified J1. But, when N&W showed the War Production Board the reduced availability numbers because of this, the Board allowed the J1s to be re-fitted as Js with the lightweight rods and shrouding in 1944. The last batch, 611–613, were built in 1950, all streamlined. The Js were built and designed completely by N&W employees, something that was uncommon on American railroads. The class should not be confused with the much earlier J class of 1903. The total cost for building 611 was $251,544 in 1950 (equivalent to $2,441,000 in 2015).

Design
The first J's had 275 psi boilers, 70-inch driving wheels, and roller bearings on all wheels and rods; after about 1945 boiler pressure was raised to 300 psi. Calculated tractive effort was 80,000 pounds – the most powerful 4-8-4 without a booster. The 70-inch drivers were small for a locomotive that was to pull trains at over 100 mph. To overcome this, the wheelbase was made extremely rigid, lightweight rods were used, and the counterbalancing was precise. As delivered, the Js had duplex (two) connecting rods between the primary (second) and third drivers, but in the 1950s Norfolk and Western's engineers elected they could do without these. 611 and at least one other Class J were rebuilt with a single connecting rod. The negative effect of the J's highly engineered powertrain was that it made the locomotives sensitive to substandard track. Its counterbalancing and precision mechanics were so modern that it was joked that the J's top speed is only limited by the nerves of the engineer. Judging by their performance in hauling a 15-car, 950 ton train at speeds in excess of 110 mph over Pennsylvania Railroad's "racetrack", the Fort Wayne Division, while on loan, it is hard to dispute that claim.

Service history
The Js were the pride of the N&W railroad, pulling passenger trains such as The Powhatan Arrow from Cincinnati to Norfolk (Cincinnati to Portsmouth for No. 611), The Pocahontas, and The Cavalier, as well as ferrying Southern Railway's Tennessean, Birmingham Special and The Pelican between Lynchburg, Virginia and Bristol, Virginia. While on test on the Pennsylvania Railroad, number 610 proved that a J could pull ten cars at 110 mph along a section of flat, straight track. Despite the power and speed capabilities the Js were among the most reliable engines, running as many as 15,000 miles per month, even on the mountainous and relatively short route of the N&W. There is one notable accident in the J class's service history, when on January 23, 1956, No. 611 derailed along the Tug River near Cedar, West Virginia while pulling the The Pocahontas. It was determined that the engineer ran the engine at an excessive speed around a curve and its high center of gravity caused it to flip on its side. Within a year, 611 was repaired and back up pulling the varnish.

In the late fifties, N&W began purchasing first generation diesel locomotives, experimenting with fuel and maintenance cost. They leased several sets of EMD E6s, E7s, E8s from the Atlantic Coast Line and Richmond, Fredericksburg and Potomac Railroads. The diesels proved to be cheaper in maintenance and fuel cost, but several were required to equal the power of a steam locomotive. In 1958 and 1959, the railroad ran several Farewell To Steam excursions, with 611 pulling the last one in October 1959. While many of the locomotives went to the scrap lines, 611 was more fortunate, in part due to its superb condition after its 1956 derailment and subsequent repair, and also in no small part to the efforts of photographer O. Winston Link, whose offer to purchase 611 himself rather than see it scrapped practically embarrassed N&W into donating it for posterity.

Preservation and excursion service
Due to the efforts of several men, including Link, engine 611 was saved. The locomotive was donated to the Virginia Museum of Transportation in Roanoke, in 1960, where it sat dormant for two decades. In the early 1980s, Robert Claytor, president of Norfolk and Western in its last months, had his eye on 611. His brother, W. Graham Claytor, once president of the Southern Railway, was in charge of Southern Railway's Steam Program. This program had been around since 1966 with Southern Railway 2-8-2 4501, sending steaming ambassadors system wide. Robert envisioned something similar for the N&W with steam. He made a lease with the museum, and in 1981, 611 was sent to Southern Railway's Norris Yard Steam Shop in Birmingham, Alabama for an overhaul.

In 1982, 611 emerged under steam, with the only change being a dual beam headlight instead of the single bulb lamp it carried in the fifties, and effectively wound up replacing another locomotive, Southern 2716, which had its excursion career suddenly ended during the restoration of 611 due to firebox problems. That was not the only change that affected 611 during the rebuild: Norfolk and Western and Southern Railway had by now merged into Norfolk Southern. This now doubled the amount of track available for 611 to tour. 611's first trip was a ferry move up the Southern into Lynchburg, Virginia, and then over N&W home rails to Roanoke for a ceremony. In 1984, the American Society of Mechanical Engineers named 611 a National Historic Mechanical Engineering Landmark and it has since been added to the National Park Service's Historic American Engineering Record. Between 1982 and 1993, 611 would make appearances at several of the National Railway Historical Society conventions, and even double-heading with locomotives such as the restored Nickel Plate Road's 587 and 765 locomotives, and Frisco 1522.

On Sunday, May 18, 1986, 611 was at the head of an Norfolk Southern employee appreciation train from Norfolk, Virginia, with Robert Claytor at the throttle. One of the passenger cars picked a switch on the main through the Great Dismal Swamp, causing it and 12 other cars of the 23 car train to derail. Many of the nearly 1,000 employees and their family members were injured; some of the more seriously injured had to be airlifted to hospitals in nearby Norfolk for treatment.
The derailment prevented the use of the main line for freight traffic for some time. This derailment brought a wave of change to the program, including the retirement of many of the older passenger cars.

Despite rumors, the program chugged on, welcoming another locomotive, former Norfolk & Western 1218, a simple articulated 2-6-6-4. The two continued to pull the systems' trains, with 611 even participating in a triple-header with N&W 1218 and Southern Railway 4501, until 1994, when another disastrous blow hit. In September of that year there was a switching accident in Lynchburg, VA, involving the passenger cars of an excursion consist that 611 was to pull the next day. This damaged several cars, causing a shortage and the consequent need for more cars. Only a month later, the announcement was made that many had expected after the Great Dismal Swamp derailment. The executives of NS were forced to terminate the steam program due to rising insurance costs, increasing cost of maintenance, and low spare system capacity. The last steam excursion was on December 3 from Birmingham, Alabama to Chattanooga, Tennessee and back, pulled by 611. The next day 611 set off on a three-day trek home to Roanoke. 611's last official day of being under steam was December 7, 1994. Between Salisbury, North Carolina and Roanoke, 611 displayed black flags on the run. That evening, upon arrival at Shaffer's Crossing in Roanoke, its fire was dumped for the last time in the 20th century.

Post excursion service
In 1995, 611 was put back in the museum, now known as the Virginia Museum of Transportation, under a new train shed. In 2003, a major renovation of the railyard brought a bigger train shed (The Robert B. Claytor and W. Graham Claytor Jr. Pavilion), and 611 was joined by twice former stable-mate, 1218. Both locomotives sat at the museum until May 24, 2014, when the 611 was towed to the North Carolina Transportation Museum in Spencer, NC, for restoration.

As one of the last, most prominent, and most distinctive locomotives assembled in Roanoke, No. 611 often serves as a symbol for Roanoke and its railroad history. It is also depicted on the Commonwealth of Virginia's "Railway Heritage" license plate. On April 2, 2012, The City of Roanoke officially donated both 611 & 1218 to the Virginia Museum of Transportation.

Second restoration and excursions
In 2011, the Norfolk Southern brought back their steam program, under the name 21st Century Steam, leading to speculation among some about a possible restoration of 611. On February 22nd 2013, the Virginia Museum of Transportation announced that they were forming a committee to conduct a feasibility study with the goal of returning the 611 to active service. The committee is known as "Fire Up 611."

On June 28th, 2013, the "Fire Up 611" committee announced that 611 would be restored to operating condition in time for Norfolk Southern's 2014 steam excursion season, if $5 million was raised by October 31st, 2013 . If the money was raised, 611 would be restored at the North Carolina Transportation Museum roundhouse in Spencer, NC. The sum of $5 million was sought, comprising: $1 million for locomotive restoration, $2 million for a dedicated maintenance shop in Roanoke, and the balance for an endowment and other items. Restoration requirements included repairs of the engine truck, the preparation of a tool car and an auxiliary water tender, application of new safety appliances such as in-cab signals and an event recorder, installation of new flues, boiler work, hydro and fire testing, test runs and inspection and repairs of the tender, running gears and air brakes. However, the hoped for amount was not reached, and the locomotive was to remain at the Virginia Museum of Transportation until the $3.5 million goal was reached.

On November 22nd, 2013, Norfolk Southern announced that they were donating $1.5 million of the proceeds from an auction of a Mark Rothko painting to the Fire Up 611! campaign. In February of 2014, several key appointments were made by the Fire Up 611 committee to the locomotive's mechanical team, and the following month, a formal agreement was made with the North Carolina Transportation Museum for restoration. On April 1st, 2014, it was announced that after raising $2.3 million, the locomotive would move to North Carolina on May 24th, 2014. 611 arrived in Spencer on May 25th and took part in the Streamliners at Spencer event the following weekend. Restoration work on the 611 began on June 2nd, 2014. Restoration was done with the help of volunteers, including several from the Age of Steam Roundhouse. Due to the generally good condition of the locomotive, restoration was complete within a year. 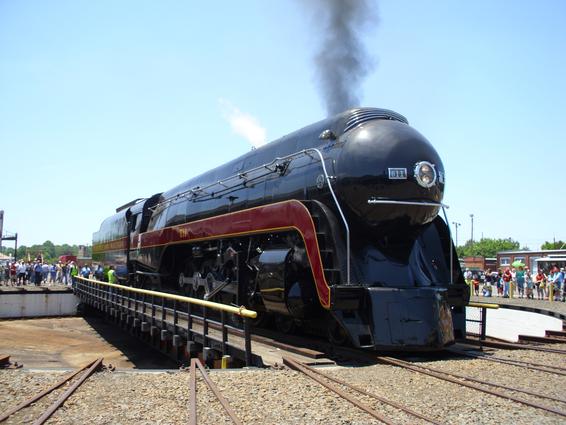 Norfolk & Western 611 under steam at the North Carolina Transportation Museum, 23 May 2015.

Norfolk and Western Steam Locomotive No. 611 at the Norris Yards, Irondale, Alabama, ca. 1993.