Norfolk and Western Railway's the "Powhatan Arrow" headed by streamlined engine No. 605, a Class J Northern type 4-8-4 locomotive, passing engine No. 2300, the "Jawn Henry." The Jawn Henry was a one-of-a-kind experimental coal turbine electric that had a water tube boiler. It was rated at 4500 horsepower at 8000 rpm. It was built by Baldwin Locomotive Works in May 1954 and left the N&W roster on January 4, 1958. Photo circa 1955.

A great period video of the N&W 2300 Jawn Henry from the WSLS archives.

N&W Railway Steam Turbine Locomotive No. 2300 "Jawn Henry"
In May 1954 Baldwin built a 4,500 horsepower (3,400 kW) steam turbine-electric locomotive for freight service on the Norfolk and Western Railway (N&W), nicknamed the Jawn Henry after the legend of John Henry, a rock driller who famously raced against a steam drill and won, only to die immediately after. Length including tender was 161 ft 1-1/2 inches, probably the record for a steam locomotive; engine-only length was 111 ft 7-1/2 inches, perhaps the record for any single unit.

The unit looked similar to the Baldwin-built C&O turbines but differed mechanically; it was a C+C-C+C with a Babcock & Wilcox water-tube boiler with automatic controls. The boiler controls were sometimes problematic, and (as with the C&O turbines) coal dust and water got into the motors. The Jawn Henry was retired from the N&W roster on January 4, 1958. 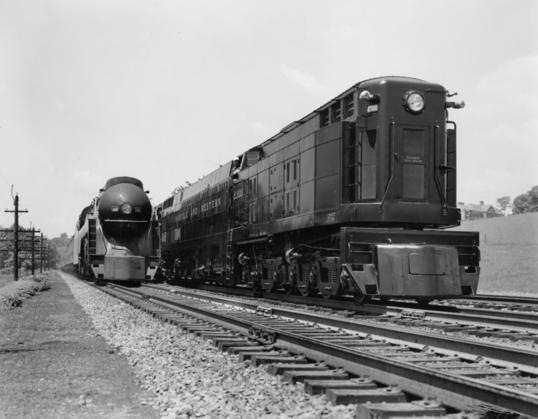