NC&StL No. 535 was a K2-35 class Pacific locomotive originally built in 1913 by the Baldwin Locomotive Works. The locomotive was streamlined and totally refurbished in 1946 by the railroad to pull their new "City of Memphis" passenger train between Memphis and Nashville, Tennessee.

The NC&StL was looking for a way to attract passengers after World War II. Their premier passenger train "The Volunteer" had been running between Memphis and Nashville for nearly twenty-five years. By 1945, the old heavyweight consists were nearly worn out. A plan was set in motion by company president W.S. Hackworth to construct a new replacement for "The Volunteer." Knowing there would be post-war demands on car manufacturers such as Pullman and Budd, the work was done by the railroad's West Nashville Shops under the direction of C. M. Darden, and the new train would be built from older existing equipment.

The new streamlined train was called the "City of Memphis", with power provided by the old (but fast) 1913 Baldwin 4-6-2 Pacific No. 535 with 72" drivers, and now completely modernized and rebuilt with a new cast frame and cylinders, a large capacity 6-wheel truck tender, and a new streamlined shroud. Six heavyweight Pullman cars were completely stripped to the frame and then rebuilt with modern 6-wheel, roller-bearing trucks, air-conditioning, and modern interior styling.  This was the first streamliner ever built in a southern railroad's own shops, which saved an incredible amount of money for the railroad, and it was also one of the last steam-powered streamliners ever built.

NC&StL No. 535 Overview
Type and Origin 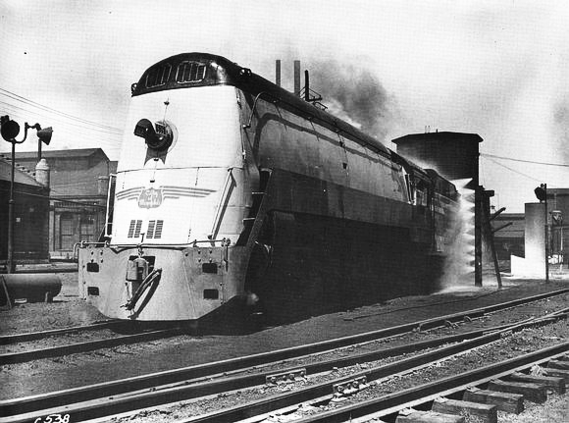