NYC Mohawk Steam Locomotive
The New York Central Railroad (NYC) called the 4-8-2 type of steam locomotive the Mohawk type. It was known as the Mountain type on other roads, but the mighty New York Central didn't see the name to be fitting on its famous Water Level Route, so it instead picked the name of one of those rivers its rails followed, the Mohawk River, to name its newest type of locomotive. Despite the more common name, the 4-8-2 was actually suited in many ways more to flatland running than slow mountain slogging, with its 4-wheel leading truck for stability at speed.

Indeed, the New York Central became the largest user of this wheel arrangement in North America, with 600 locomotives of this type built for its service; only the Pennsylvania Railroad came anywhere close, with 301 of the type.

The Mohawk type was the preeminent freight power of the System, displacing the Mikado (2-8-2) type from first line service. While other roads obtained much more massive freight power, Decapods (2-10-0s), Texas (2-10-4) types and a multitude of articulated designs, the New York Central, with its practically level high-speed raceways along the rivers, needed speed, not lugging ability.

The 600 Mohawks delivered were divided into four main classes, plus a few experimental and prototypes:

L-1
The first Mohawks delivered for the NYC were delivered by ALCO in 1916; these were purely freighters, with 69-inch drivers and small tenders. Further orders of L-1 subclasses followed in subsequent years, including some from the Lima Locomotive Works. All these locomotives had uncluttered lines as built, mostly thanks to the lack of such modern appliances as feedwater heaters, booster engines and the like. Many had feedwater heaters and other appliances added later, however. 185 L-1 locomotives were produced.

Experimental 3-cylindered
The New York Central had two L-1 locomotives rebuilt by Alco in 1922 with three cylinders to help determine if three-cylinder drive was worthwhile. They were substantially more powerful than the two cylinder locomotives but it was debatable if the additional maintenance headaches of that third, hard to reach central cylinder, valve gear, main rod and crank axle were worthwhile. The NYC must have come down on the negative side of that question, for no more were built.

L-2
The next development of the Mohawk type for the New York Central was the L-2, 300 of its various subclasses being built between 1925-1930. These were rather more modern locomotives than the L-1 class, fat-boilered, long-tendered, fitted with feedwater heaters, mostly of the Elesco type and generally mounted in front of the smokebox at the top, giving an aggressive, beetle-brow look. Later L-2 subclasses, the L-2b and L-2c, had somewhat smoother lines with recessed feedwater heaters and cleaned up lines. The later L-2 locomotives, in fact, looked very close in styling to the Central's fleet of Hudson passenger locomotives.

L-3
The next development of the Mohawk type was that of the dual service locomotive, capable of working passenger as well as freight trains. Passenger service required the ability to work at 80 mph, as opposed to the 60 mph required of freight. The NYC's fleet of Hudsons, 275 strong though it was, was proving inadequate to handle peak traffic demands, and some dual-purpose power would fix the problem nicely, as well as giving the ability to handle express freight and mail services.

Two L-2 locomotives were given modifications for dual service work; higher boiler pressure, smaller cylinders, light-weight reciprocating parts, dynamic counterbalancing of the drivers, roller bearings on all axles, etc. The success of these modifications prompted the construction of the L-3 class in 1940, 25 of which were built for dual service and the remaining 40 for freight only.

All L-3 locomotives were given axle spacing that could accommodate 72" drivers, but only one was ever fitted with such. This locomotive, No. 3000, paved the way for the final class of Mohawks on the Central, the L-4.

L-4
50 L-4 locomotives were produced by the Lima Locomotive Works in 1943. None of them had booster engines, although they were built to take them should they be ever needed in a dash, but they were not. The L-4s were truly dual purpose locomotives, and worked the heaviest freight and passenger trains during the war. The L-3 and L-4 classes had huge tenders riding on two six-wheel trucks that were almost as long as the locomotives hauling them, and were mostly coal space, a capacity for 43 tons of coal; water was taken en route using the tender scoop from track pans and thus the locomotives did not need to have that great an on-board water capacity. Some L-4s had Scullin drivers.

Many L-4 locomotives were fitted with smoke deflectors later on.

Survivors
Two Mohawks survive, making them the most numerous examples of New York Central steam power remaining after all NYC's Hudsons and Niagaras were scrapped. The first, No. 2933, is a 1929 ALCO-built L-2d and resides at the Museum of Transportation, St. Louis, Missouri while the second, No. 3001, is a 1940 ALCO-built L-3a at the National New York Central Railroad Museum in Elkhart, Indiana.

The tenders for two other Mohawks still exist as well. The tender from 2662, a class L-1d, is currently in use behind Lake Superior & Ishpeming 2-8-0 No. 34 at the Western Maryland Scenic Railroad. The tender for L-3b 3042 was converted into a water tender and used with Reading T-1 4-8-4 No. 2101 during its tour with the American Freedom Train, as well as with the Chessie System Special. It was later damaged in a roundhouse fire. This water tender is now at the National New York Central Railroad Museum in Elkhart, Indiana. 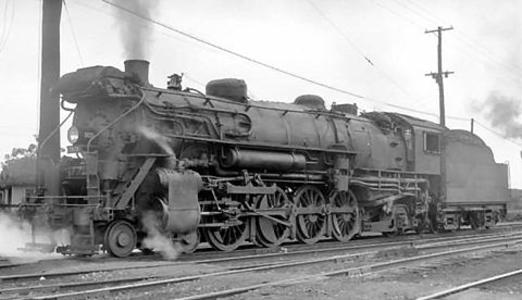