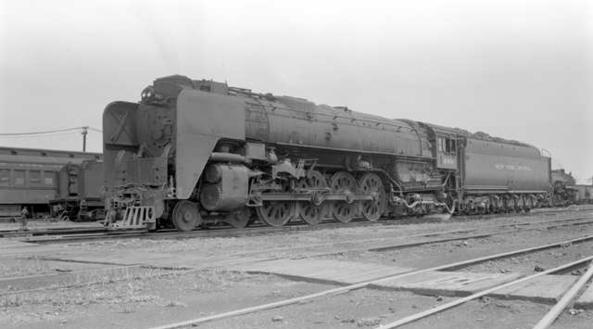 NYC Niagara 4-8-4 Steam Locomotive
The New York Central Railroad's Niagara was a steam locomotive named after the Niagara River and Falls. It had a wheel arrangement of 4-8-4 in the Whyte notation and is considered as one of the most efficient 4-8-4 ever built.

The first New York Central Railroad Northern (or 4-8-4) was ordered in 1931: No. 800, an experimental locomotive that had its boiler divided into three sections of different pressure. This was another failed experiment in high pressure steam locomotives.

By the 1940s loads being hauled on the New York Central main line from New York to Chicago were as much as the famous J-class NYC Hudson 4-6-4's could handle. The Chief of Motive Power for the railroad, Paul W. Kiefer, decided to order some 4-8-4's which could sustain 6,000 horsepower (4,500 kW) on the run between the two cities, on a continuous basis.

The American Locomotive Company ALCO proposed these locomotives, and although the design owes something to the Union Pacific 4-8-4's, of which Union Pacific 844 is the best-known, the design was actually quite new. Some steam experts have claimed the Niagara to be the ultimate locomotive, as it had the speed of an FEF (the Union Pacific's nickname for their 'four eight fours' was FEF) and the power of Northerns with smaller driver wheels.

Locomotive details
The first Niagara was Class S-1a No. 6000 in 1945; the S-1b (6001-6025) were delivered in 1945-46. The NYC's last steam locomotive was Class S-2 No. 5500; it had poppet valves. The Niagaras did not have steam domes, as did most steam locomotives, which resulted in a smooth contour along the top of the boiler. A perforated pipe collected steam instead. This was necessary because of the lower loading gauge of the New York Central (15 ft 2 in versus 16 ft 2 in (4.93 m) for other American railroads).

These locomotives had a small water capacity (18,000 gallons; 68,000 liters) in the tender, because the New York Central was one of the few in North America which used track pans. This allowed a larger coal capacity—46 tons—so the New York to Chicago run could be done with one stop for coal. (The stop was said to be at Wayneport, New York, 14 miles east of Rochester, but that would leave 603 miles to Chicago via the Cleveland lakefront.)

All bearings were either roller bearings or needle rollers.

Maintenance
The six days per week running schedule of these locomotives meant that all of the maintenance work normally done over the course of that week would have to be done on one day. This meant a specialized system was developed, where men in "hot suits" (asbestos heat-resistant coveralls) entered the firebox while the locomotive was still in steam and cleared all of the tubes, repaired the brick arch, etc. As the temperature inside the firebox itself would have been well over 100 degrees Celsius (212 F), and the working area these maintenance workers would have been standing on was the still-hot firebars of the grate, all references describe these workers as 'heroic'.

The results were much closer than the diesel salesmen were comfortable with, but these steam locomotives were hampered by several factors: a series of coal miners' strikes; aggressive dieselization sales efforts; and a failure of the highly-expensive firebox-wrapper metallurgy to withstand the conditions of actual operation.

Disposition
None of the NYC Niagara units survive. As the firebox wrappers failed, the locomotives were withdrawn, and eventually all were scrapped. The retirement dates are below:

The dates of scrapping are unknown at this stage, but this was believed to have occurred at Granite City (near St. Louis).

Replicas
Completed in 1998 after 25 years construction, the accurate live steam replica 1/5 scale 10 1⁄4" gauge of 6019 is the largest known example of this extinct class in the world and works alongside a 1/5 scale NKP Berkshire at the private Stapleford Miniature Railway in the UK.