The Pennsylvania Railroad's mighty T1 was in a class of its own.

Note: many converted to Freight

Note: many converted to Freight

Note: ordered but delivered to PC

Note: converted to helper aka "Centipede"

PRR Locomotive Classification
Locomotive classification on the Pennsylvania Railroad took several forms. Early on, steam locomotives were given single-letter classes. As the 26 letters were quickly assigned, that scheme was abandoned for a more complex system. This was used for all of the PRR's steam locomotives, and — with the exception of the final type bought (the E44) — all electric locomotives also used this scheme.

By vxla from Chicago, US [CC BY 2.0 (http://creativecommons.org/licenses/by/2.0)], via Wikimedia Commons 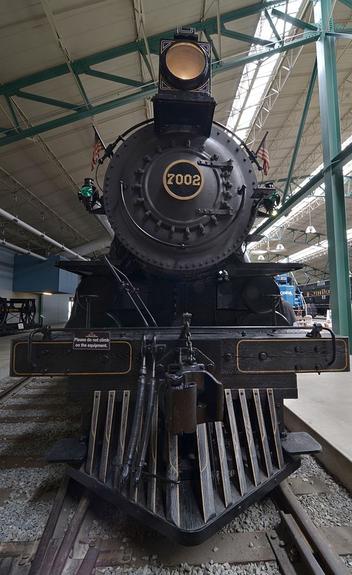 Diesel classification
The Pennsylvania Railroad was slow to dieselize. By the end of WW2 they only had 18 units. However over the next 22 years they had acquired a total of 3,005 units. They bought from all the manufacturers: Alco 516 units, Baldwin 643 units, EMD 1,479 units, Fairbanks-Morse 200 units, General Electric 145 units, and Lima 22 units. This diversity was a nightmare for the maintenance department as there was very little compatibility among the different builders.

The class number system is as follows:
The first letter stood for the manufacturer; A=Alco, B =Baldwin, G =General Electric, E =EMD, F =Fairbanks-Morse, and L =Lima.
The second and third letters represented the type of service; S =switcher, F =Freight, P =passenger, :: PF=dual service, RS =road-switcher, and H =helper.
The next number(s) were for horse power rounded to hundreds.
The last letter, if used, was for model variations. 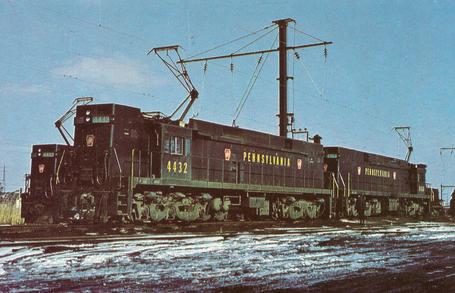 PRR Steam and Electric Classification
A: 0-4-0
Class A was the 0-4-0 type, an arrangement best suited to small switchers. Most railroads abandoned the 0-4-0 after the 1920s, but the PRR kept it alive for use on small industrial branches, especially those with street trackage and tight turns.
A1
A2
A3
A4
A5s

I: 2-10-0
The 2-10-0 "Decapod" type was assigned class I. The PRR only owned one type of Decapod, class I1s, but they owned 598 of them, one of the largest classes of identical power in the United States.
I1s - heavy freight hauler.

P: 4-6-4
The 4-6-4 arrangement was seen on the PRR only on electric locomotives. As a steam locomotive arrangement, it was poorly suited to the PRR's mountainous terrain, wasting much potential adhesive weight on non-driven wheels. That it was so widely used by the rival New York Central would also likely have factored against PRR adoption.
P5 - mixed-traffic electric locomotive.

R: 4-8-4
The PRR never built any steam locomotives of the 4-8-4 "Northern" type, although the T1 duplexes were effectively a "Northern" with the driving wheels split into two groups.
R1 - experimental electric locomotive, surpassed by the GG1.

S: 6-4-4-6 or 6-8-6
Both S class locomotives were originally intended to only have four leading and trailing wheels, but increases in weight required them. In the case of the S2, it was due to wartime limits on the use of advanced steel alloys.
S1 - experimental duplex express passenger locomotive.
S2 - experimental steam turbine locomotive.

T: 4-4-4-4
The duplex-drive T1 was the final class of steam locomotive constructed for the Pennsylvania Railroad, and possibly the most controversial.
T1 - Duplex express passenger locomotive.

The horsepower-based designation unique to the E44 would be retained and expanded by Penn Central to cover the former New Haven EF4s (E33) and EP5s (E40). 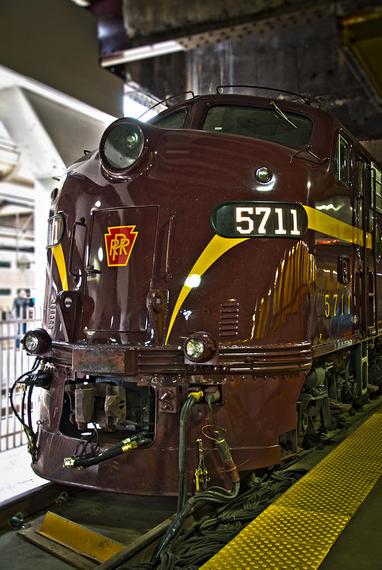 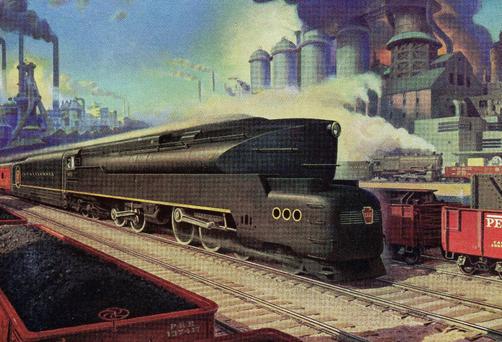