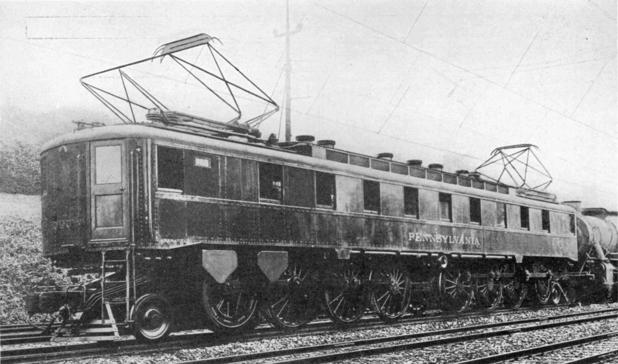 PRR FF1 Electric Locomotive
The Pennsylvania Railroad's class FF1 was an electric locomotive, a prototype numbered No. 3931 and nicknamed "Big Liz". It was built in 1917 to haul freight trains across the Allegheny Mountains where the PRR planned to electrify. "Big Liz" proved workable but too powerful for the freight cars of the time with its 4,600 available horsepower and astonishing 140,000 lbf (620 kN) of tractive effort. Pulling the train it regularly snapped couplers and when moved to the rear as a pusher its force was sufficient to pop cars in the middle of the train off the tracks.

It had a 1-C+C-1 wheel arrangement in two half-frames, connected in the center. Each frame had a pair of three phase AC induction motors driving a jackshaft through gearing and a spring drive; side rods then drove the wheels. Three phase power for the 4 massive motors was supplied from the single phase overhead supply via a large rotary converter housed in the body of the locomotive. Combined rated output of the motors was 7,640 hp (5,700 kW), but the converter could only supply a short term 4,600 hp (3,400 kW) or a continuous 4,000 hp (3,000 kW). With three-phase induction motors there was no way to control the speed of the motors; changing the wiring of the motor poles allowed for two speed settings, 10.3 and 20.6 mph (16.6 and 33.2 km/h), which were considered enough to drag heavy freight trains up and down steep grades.

Sadly, its intended use as an Allegheny climber was never realized and its power was too much for the rolling stock in service at the time. Big Liz was sidelined until being cut up for scrap in 1940.