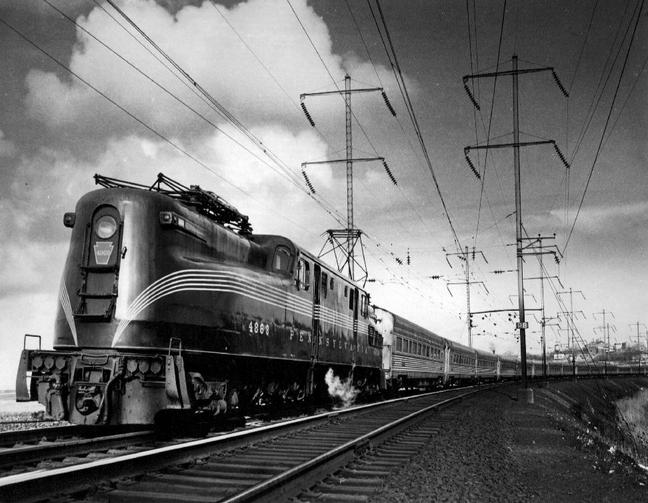 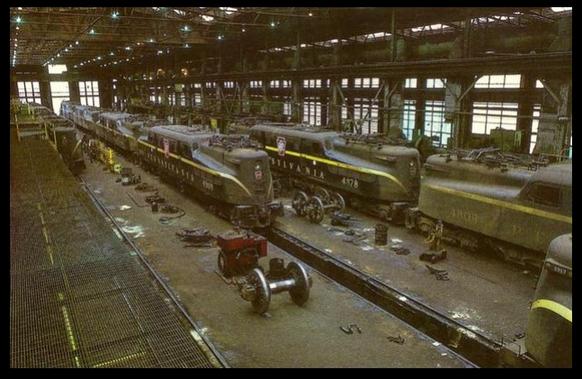 PRR GG1 Electric Locomotive
The PRR GG1 was a class of electric locomotives built for the Pennsylvania Railroad (PRR) for use in the northeastern United States. Between 1934 and 1943, General Electric and the PRR's Altoona Works built 139 GG1s.

The GG1 entered service with the PRR in 1935, and later operated on successor railroads Penn Central, Conrail and Amtrak. The last GG1 was retired by New Jersey Transit in 1983. Most have been scrapped, but several remain in museums.

Technical information
The GG1 was 79 feet 6 inches long and weighed 475,000 pounds. The frame of the locomotive was in two halves joined with a ball and socket joint, allowing the locomotive to negotiate sharper curves. The body rested on the frame and was clad in welded steel plates. The control cabs were near the center of the locomotive on each side of the main oil-cooled transformer and oil-fired train-heating boiler. This arrangement, first used on the Modified P5 class, provided for greater crew safety in a collision and for bi-directional operation of the locomotive. A pantograph on each end of the locomotive body was used to collect the 25 Hz, 11,000 V alternating current (AC) from the overhead lines. In operation the leading pantograph was usually kept lowered and the trailing raised to collect current, since if the rear pantograph failed it would not strike the forward pantograph. Transformers between the two cabs stepped down the 11,000 V to the voltages needed for the traction motors and other equipment.

Twelve 385-horsepower GEA-627-A1 traction motors drove the GG1's 57-inch diameter driving wheels on six axles using a quill drive. Four non-powered leading/trailing wheels were mounted on each end of the locomotive. The traction motors were six-pole, 400 volts, 25 Hz rated at 385 hp, with the 12 motors mounted in pairs over each of the six driving axles. Each motor was geared to what is called a "quill," a shroud around the axle itself, and the quill was connected to the drivers by means of a spring and cup arrangement. The motors were mounted on each frame which provided a flexible suspension system to provide full and equal traction for each of the drivers regardless of track condition. Using Whyte notation for steam locomotives, each frame is a 4-6-0 locomotive, which in the Pennsylvania Railroad classification system is a "G". The GG1 has two such frames back to back, 4-6-0+0-6-4. The related AAR wheel arrangement classification is 2-C+C-2. This means one frame consisting of a set of two axles non-powered (the "2") and three axles powered (the "C") hinged with the ball and socket to another frame of the same design (the +). The non-powered "2" axles are at either end of the locomotive.

History
The mechanical design of the GG1 was based largely on the New Haven EP3, which had been borrowed earlier from the New Haven Railroad by the PRR to compare it to its current standard electric locomotive, the P5a. In 1933, the PRR decided to replace its P5a locomotives and told General Electric and Westinghouse to design prototype locomotives with the following specifications: a lighter axle load and more power than the P5a, a top speed of at least 100 miles per hour (160 km/h), a streamlined body design and a single (central) control cab.

Both companies delivered their prototypes to PRR in August 1934. General Electric submitted the GG1 and Westinghouse submitted the R1. The R1 was essentially "little more than an elongated and more powerful version of the P5a" with an AAR wheel arrangement of 2-D-2. Both locomotives were tested for ten weeks in regular service between New York and Philadelphia and on a test track in Claymont, Delaware. Because the R1's rigid wheelbase prevented it from negotiating sharp curves and some railroad switches, PRR chose the GG1 and ordered 57 additional locomotives on November 10, 1934. Of the 57, 14 were to be built by General Electric in Erie and 18 at the Altoona Works. The remaining 20 locomotives were to be assembled in Altoona with electrical components from Westinghouse in East Pittsburgh and chassis from the Baldwin Locomotive Works in Eddystone. An additional 81 locomotives were then built at Altoona between 1937 and 1943.

On January 28, 1935, to mark the completion of the electric line from Washington, D.C to New York City, PRR ran a special train pulled by PRR 4800 before it opened the line for revenue service on February 10. It made a round trip from D.C. to Philadelphia and, on its return trip, set a speed record by arriving back in D.C. 1 hour and 50 minutes after its departure from Philadelphia.

In the mid-1950's, with declining demand for passenger train service, GG1s 4801–4857 were re-geared for a maximum speed of 90 miles per hour and placed in freight service. They initially retained their train heating steam generator, and were recalled to passenger service for holiday season mail trains, and 'Passenger Extras' such as those run for the annual Army–Navy football game in Philadelphia.

Timetable speed limit for the GG1 was 75-80 mph until October 1967 when some were allowed 100 mph for a year or two;[citation needed] when Metroliner cars were being overhauled in the late 1970s, GG1s were again allowed 100 mph when pulling Amfleet cars on trains scheduled to run 224.6 miles from New York to Washington in 3 hours 20–25 minutes.

Although it was thought until 2009 that Loewy was solely responsible for the GG1's styling, Dohner is now understood to have contributed as well. (Dohner's GG1 designs influenced the modified P5as, which debuted before the GG1 — not, as was thought, the other way around. Loewy did claim that he recommended the use of a smooth, welded body instead of riveted one used in the prototype. Loewy also added five gold pinstripes and a Brunswick green paint scheme.

In 1952, the paint scheme was changed to Tuscan red; three years later, the pinstripes were simplified to a single stripe and large red keystones were added.

Incidents
On January 15, 1953, train 173, the overnight Federal from Boston, was approaching Washington behind GG1 4876. The train passed a signal 2.1 miles north of Union Station between 60 and 70 miles per hour, and the engineer decreased the throttle and started applying the brakes. When the engineer realized that the train was not slowing down, and applying the emergency brake had no effect, he sounded the engine's horn. A signalman, hearing the horn and noting the speed of the 4876, phoned ahead to the station master's office. 4876 negotiated several switches without derailing, at speeds well over the safe speed limits and entered the station at around 35 to 40 miles per hour. The train demolished the bumping post, continued through the station master's office and into the concourse where it fell through the floor into the station's basement. Thanks to the evacuation of the concourse, there were no fatalities in the station, or aboard the train. A temporary floor was erected over the engine, and the hole it created, for the inauguration of President Dwight D. Eisenhower. 4876 was eventually dismantled, removed from the basement and reassembled in Altoona. It survives in the B&O Railroad Museum in Baltimore.

The accident was determined to have been caused by a closed "angle cock", a valve on the front and rear of all locomotives and rail cars used in the train's air brake system, on the rear of the third car in the train. The handle of the angle cock had been improperly placed and had contacted the bottom of the car. Once it was closed the air brake pipe on all the cars behind the closed valve remained at full pressure, keeping the brakes released on those cars while the brakes on the locomotive and first three cars were applied in emergency.

The only major electro-mechanical breakdown of the GG1 was caused by a blizzard which swept across the northeastern United States in February 1958. The storm put nearly half of the GG1's out of commission. Exceptionally fine snow, caused by the extreme low temperatures, was able to pass through the traction motors' air filters and into the electrical components. The snow then melted and short circuited the components. On about 40 units, the air intakes were moved to a position under the pantographs.

Disposition
In 1968 the PRR with its 119 surviving GG1's merged with the New York Central Railroad to form Penn Central. After its creation in 1971, Amtrak purchased 30 for $50,000 each, and leased 21, of which 11 were for use on New York and Long Branch commuter trains. Amtrak renumbered the purchased GG1's Nos. 900–929 as a solid block, later renumbered with a prefix "4". The leased units with conflicting numbers were then renumbered 4930–4939, except 4935 which kept its old PRR/PC number.

Amtrak attempted to replace the GG1s in 1975 with the General Electric E60, but they were not a success: a 102-mile-per-hour derailment during testing had to be investigated (the E60 used the same trucks as the P30CH diesel then in service with Amtrak), which delayed acceptance, and the hoped-for 120 miles per hour service speed was never achieved (timetable limit was 90 mph, then 80, then 90).

It was not until Amtrak imported two lightweight European locomotives – X995, an Rc4a built by ASEA of Sweden and X996, a French design – that a replacement was found. The ASEA design, initially nicknamed the "Swedish swifty", or the "Mighty Mouse", and later referred to often as the "Swedish Meatball",  was the winning design. Electro-Motive Diesel, then a part of General Motors, was licensed to build it and it became the basis of the AEM-7. With AEM-7s on hand, Amtrak finally replaced its GG1s. GG1 service on Amtrak ended on April 26, 1980.

Penn Central went bankrupt in 1970 and its freight operations were later assumed by government-controlled Conrail, which used 68 GG1s in freight service until the end of electric traction in 1980.

The last GG1s in use were some of the 13 assigned to New Jersey Transit (#4872–4884) for its North Jersey Coast Line between New York and South Amboy (the former New York and Long Branch) that ran until October 29, 1983.

Fifteen production locomotives and the prototype were preserved in museums. None are operational, due to difficulties with running their transformers.

In popular culture
During the mid-1930s, the art of streamlining became popular, especially with locomotives, as it conveyed a sense of speed. While other railroads were introducing streamlined trains, like the Union Pacific's M-10000 or the Chicago, Burlington and Quincy Railroad with the Zephyr, the PRR had the GG1. The GG1 has "shown up over the years in more advertisements and movie clips than any other locomotive." It was also featured in art calendars provided by PRR, which were used to "promote its reputation in the public eye." It has appeared in the films Broadway Limited in 1941, The Clock in 1945, Blast of Silence in 1961, the 1962 version of The Manchurian Candidate, and Avalon in 1990 in the PRR paint scheme. Two GG1s appear in the 1973 film The Seven-Ups—a black Penn Central locomotive and a silver, red and blue Amtrak locomotive. A Penn Central GG1 also appears in another 1973 film The Last Detail. PRR GG1 4821 appears briefly in the 1952 film The Greatest Show on Earth, pulling the Ringling Bros. and Barnum & Bailey Circus Train into Philadelphia's Greenwich Yard, with the movie's director Cecil B. DeMille narrating the scene of their arrival. Near the end of the 1951 film Bright Victory GG1 #4849 is shown pulling into the station.

A GG1 and the Congressional were featured on a postage stamp as part of the United States Postal Service's All Aboard! 20th Century American Trains set in 1999.

The PC games Railroad Tycoon II, Railroad Tycoon 3, and Sid Meier's Railroads! allow for players to purchase and operate GG1 locomotive engines on their train routes. The GG-1 is also available with the default Trainz Simulator Games in recent years, and they have been made available as add-ons for Railworks and Microsoft Train Simulator.

"The wreck is sometime in the 1950s along the Gwynns Falls in West Baltimore. My father shot the series." - Walter Hiteshew