PRR S2 Class Steam Turbine Locomotive
The Pennsylvania Railroad's class S2 was a steam turbine locomotive. One was built, No. 6200, delivered in 1944. The S2 was the sole example of the 6-8-6 wheel arrangement in the Whyte notation, with a six-wheel leading truck, eight driving wheels, and a six-wheel trailing truck. The S2 used a direct-drive steam turbine; the turbine was geared to the center pair of axles with the outer two axles connected by side rods. The disadvantage was that the turbine could not operate at optimal speeds over the locomotive's entire speed range. The S2 was the largest direct-drive turbine locomotive design ever built.

The locomotive was to be a 4-8-4, but wartime restrictions on light steel alloys increased weight until six-wheel leading and trailing trucks were needed. Two turbines were fitted, one for forward travel and a smaller one for reversing at speeds up to 22 mph (35 km/h). A large boiler with a Belpaire firebox and long combustion chamber was fitted. The turbine exhaust was piped through a set of four nozzles in the smokebox, providing an even draft for the fire and exiting through a unique quadruple stack. A Worthington-pattern feedwater heater was fitted for increased efficiency. Twin air pumps for train braking were fitted below the running boards beside the smokebox front, and a large radiator assembly at the nose cooled the compressed air. The large 16-wheel tender was similar to that used on the PRR's other large passenger locomotives, the T1 and S1.

The locomotive proved to be powerful and capable, with reserves of power at speed and reasonable fuel economy. The turbine drive was easy on the track and allowed more power at the rail. While economical at speed, the locomotive was highly uneconomical at lower speed. The turbine used less steam than conventional locomotives above 30 mph (48 km/h) below that, the locomotive used too much steam and fuel. The boiler normally operated at 310 psi (2.1 MPa), but at low speed the pressure could drop as low as 85 psi (0.59 MPa). The increased fuel usage at low speeds caused the firebox to run hotter, which sometimes caused stay bolts to break.

The locomotive's problems and the advantages of the emerging Diesel locomotive ensured No. 6200 would never be duplicated. The locomotive was withdrawn from service in 1949 and scrapped in 1953. 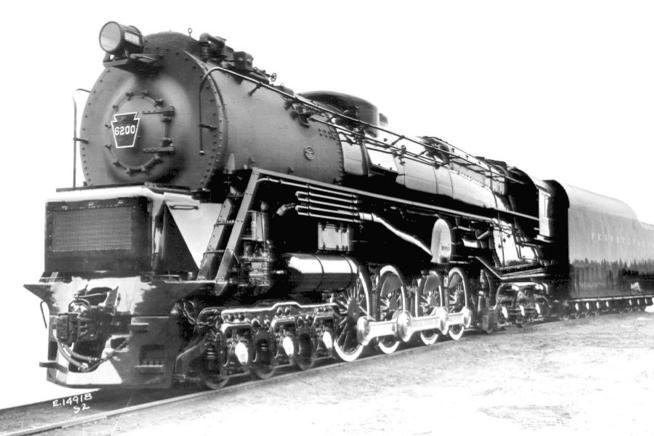