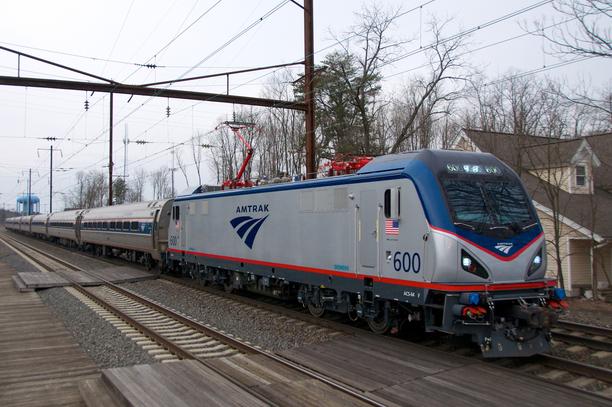 Well it's hard to believe we've now passed through the majority of the summer. For readers of Classic Streamliners our hope is that it has been a good one. This edition of Rail Notes will highlight some of the important developments not only in intercity and regional rail but some tidbits on metropolitan transit as well. In summary form therefore:

Electric Off and Electric On:
Chicago's METRA has said farewell to the electric bi-level Highliners after nearly 45 years of service. They operated on the former Illinois Central Metra Electric Line that ran south from Chicago's Millennium Park Station to University Park. St. Louis Car delivered the original order of 130 cars that could accommodate 148 passengers per car. An additional 38 cars were added between 1978 and 1979. The RTA-Regional Transit Authority has ordered 26 replacements from Nippon Sharyo coming on line in 2005 as Class MA2A. A further order for 160 car, some of which were placed in service in 2012, were of the HL-2 series.

Across the country in the San Francisco Bay area it’s likely to be electric on for CALTRAIN Peninsula commute service to San Jose and Gilroy. This is part of the collaboration between the California High Speed Rail Authority that will not only see electric suburban trains on the rails by 2020 but also will share, or blend in local parlance, the right of way for the planned speedy trains in 2025. The $2 billion electrification price tag will be offset by the CHRA's recent vote to contribute $713 million to the CALTRAIN initiative. Additionally another $84 million from CHRA will go to San Mateo for three grade separation projects.

Denver's RTD continues to actively support both regional rail and light rail-all electric at that! On April 22 the University of Colorado A Line began the area's first heavy rail commuter service between the stunning Union Station and Denver International Airport-a distance of 26 miles. Next to follow on July 25th was the “B” Line, also heavy rail, currently a 6 mile trip northwest from Union Station to Westminster. Further expansion is planned for this line but route considerations are still under study.

Streetcars in the News
Two Midwest cities will have joined the growing ranks of those with streetcar lines as you read this. Kansas City launched its Ride KC Streetcar initial 2.2 route on May 6th. This service will run from Union Station to Crown Center via the Central Business District. Next to follow is the Cincinnati Streetcar's first line with pre-revenue service on August 7th. This 3l.6 mile link runs from the Over the Rhine neighborhood to the Downtown business district. Officially the Cincinnati Streetcar will be taking on passengers on September 9th.

Currently planned for the end of August, Dallas area residents will see the Bishop Arts extension of the Dallas Streetcar. A preview run is scheduled for August 27th. The total extension mileage is 0.7 from the present terminus at Methodist Dallas Medical Center to the popular entertainment and retail mecca of Bishop Arts in the Oak Cliffs neighborhood. Dallas uses Brookville streetcars with its first in the country wireless traction power.

AMTRAK Info-bites
The times they are a changin' as Amtrak announced that it no longer will publish hard copies of the system-national timetable. Individual route timetables are said to be continuing in circulation.

It's a full count of 70 Siemens built City Sprinters now at AMTRAK. Officially designated ACS-64 the final electric unit was handed over on June 2nd. They are the successors to the AEM7's.

A farewell excursion honoring the AEM 7 electric locomotive was held by AMTRAK on June 18th. This class of locomotives operated for 37 years on the Northeast Corridor.

AMTRAK California on June 20th introduced a 7th San Joaquin round trip between Oakland to Bakersfield. Hard to believe-or is it- that it has been 14 years since this wildly popular line had a new train added.

A new AMTRAK Metropolitan Lounge was opened on June 27th at Chicago's Union Station. This is just part of the phased in approach that will see extensive changes to the historic station.

Rumor-or active planning-has it that sometime in the fall the Lake Shore Limited will have a month long trial reroute, in both directions, between Chicago and Toledo. If it actually comes to pass this would gauge the impact on passenger counts and revenue.

Regional Rail
SEPTA has withdrawn all Silverliner V's on account of truck fatigue cracks and fractures. After repairs the cars will be phased in starting in September. Meanwhile AMTRAK, MARC and NJ TRANSIT have supplied equipment to help out the Philadelphia based commuter system.

On May 23rd Boston's MBTA debuted a twice daily Boston to Worcester service with limited stops. The trains will make the trip in a tad over 60 minutes.

The NORTHERN INDIANA CTD is presently in the initial phase of engineering evaluation that may ultimately result in 25 miles of additional second track between Gary and Michigan City. That is all part of the overarching goal of increasing capacity with the reduction of travel time on their Chicago, South Shore & South Bend commuter line.