Railserve
Railserve is a railway industry service company based in Atlanta, Georgia. It is the largest U.S. provider of in-plant switching and associated services with over 70 such operations, and also employs over 1,000 individuals. It is part of the Marmon Group (a Berkshire Hathaway company). The company also maintains offices in Calgary, Alberta, Canada.

The Railserve Leaf is a genset locomotive built by Railserve. It is constructed in both single- and dual-engine variants, and is primarily used in low-speed and high tractive effort switching and shortline applications. The Leaf was introduced in the single-engine model in 2010, of which 32 had been built by the end of 2012. Compared to traditional diesel locomotives, genset locomotives use about 50 percent less fuel, are more easily started, and can be shut down when not in use.

The dual-engine version of the locomotive, powered by two 600-horsepower Cummins QSX15 engines, was introduced in 2012. In 2016, the locomotive was updated to meet EPA Tier 4 emissions standards, and the first Tier 4–compliant Leaf entered service in mid-2017.

The Railserve LEAF and Dual LEAF are both produced at the company's Longview, Texas facility. 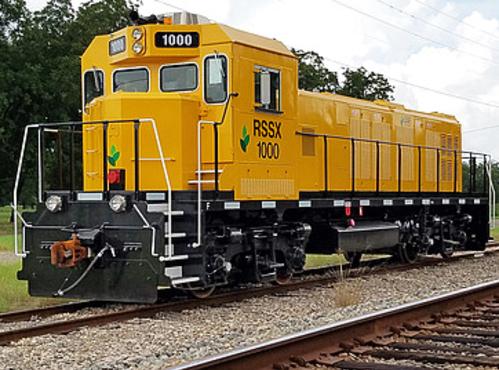